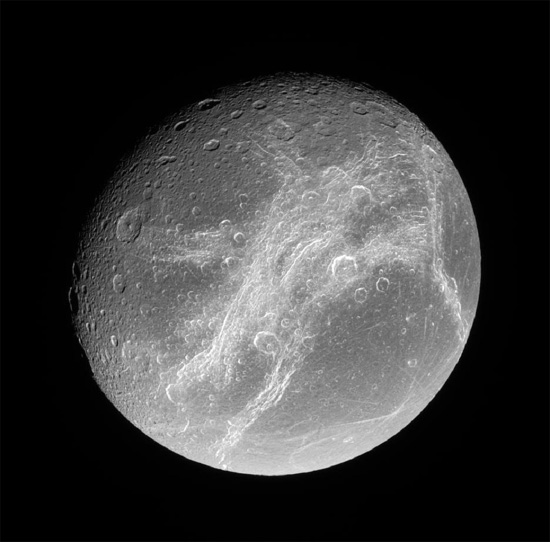 As the Cassini spacecraft continues to explore the environment around Saturn, more close up and detailed images reveal that its moons have experienced what might be called, “catastrophic” events in the past.

As mentioned in a previous Picture of the Day articles, Dione and Tethys are active worlds, similar to Enceladus, spewing streams of particles into the plasmasphere of Saturn. Titan, another large moon, has landforms on its surface that suggest to NASA observers that there may be flowing liquid ethane rivers or hydrocarbon lakes present. Although the idea is speculative, it illustrates how strange the moons of the outer Solar System really are.

On Dione, several bright cliffs are visible, wrapping around it and extending for many kilometers. In a flyby animation, the camera focuses on those features and shows that they have a braided shape, often cut through craters and intersect other cliffs. Because Dione has no atmosphere and is only 1126 kilometers in diameter, it was thought to be geologically inactive. Then the plumes of charged particles were found erupting from a number of hot spots on its surface.

In the Electric Universe hypothesis, those plumes are plasma discharges that are ejecting material into space, just as on Jupiter’s moon Io. It is likely that conditions existed in the past where that activity was much more energetic, forming the etched terrain that is visible today.

The grooves and canyons run parallel to each other. They have sharp rims and begin abruptly with no eroded appearance. They have side canyons running off at ninety-degree angles and craters along their lengths, often in chains. The craters are shallow with no debris around them and have central peaks similar to craters found on Earth’s Moon and on other planets, such as Mars. In past Picture of the Day articles, such formations have been identified with electric discharge machining.

Saturn’s moons orbit within its plasmasphere and exchange electrical energy with one another, so electricity must be considered whenever unusual morphology is observed. Translating earthly geologic forces and the slow progress of erosion onto the appearance of the other planets and moons misses the point. Wind and rain erode our planet and presumably create canyons and valleys. When no wind or rain exists–such as on Dione–how to explain the fresh looking and unique topography that defies convention? Should the assumption that wind and rain, alone, have sculpted the Earth also be questioned?