In Part One of this presentation, physicist Wal Thornhill, Chief Science Advisor, The Thunderbolts Project, introduced evidence for the extraordinary, recent origins of our planetary neighbor Venus. In myth and folklore around the entire globe, Venus was remembered as the great comet, as a dragon-like serpent breathing fire about the ...
Continue reading >>

Since the dawn of the Space Age, perhaps no celestial body in the solar system has proved more surprising to astronomers than the planet Venus. Before the arrival of the earliest space probes, some noted scientists believed that Venus would be earthlike, with water clouds, oceans and abundant vegetation. However, ...
Continue reading >>

Thunderbolts Picture of the Day (TPOD)

December 3, 2020 Is the Universe expanding? Modern astronomers believe that galaxies are receding from each other because they received "inflationary energy" imparted by the Big Bang. They estimate the recession to be about 71 kilometers per second for every 3.3 million light-years of spatial distance. This "dilation of space-time" ...
Continue reading >>

Eye of the Storm, Part 8

Dragon Rules by Andrew Hall According to consensus science, ancient cultures across the planet -- with no communication between them -- independently and spontaneously invented dragons. Remarkably, they all invented the same physical description and modus operandi: a fire breathing serpent, origin in the sea, havoc across the land, and ...
Continue reading >>

Discourses on an Alien Sky Series

Here we offer a brief preview of our directions in 2020 and beyond, supporting a revolutionary interpretation of the mythic and symbolic archetypes. Our purpose is to demonstrate that the documented archetypes are explicitly and inseparably connected to the themes we’ve repeatedly affirmed in these Discourses. Our claim is that ...
Continue reading >> 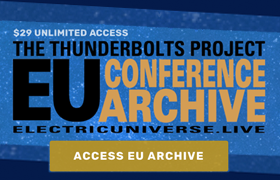 Unlimited access to the EU Conference Archive is now available for only $29. Contains all keynote and speaker presentations from EU2017: Future Science and EU2016: Elegant Simplicity. Coming soon EU2015: Paths of Discovery. 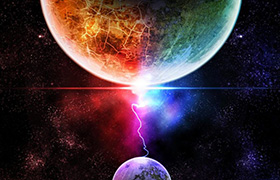 In this groundbreaking work, Wal Thornhill introduces a new Theory of Everything: The Electric Universe. The only coherent cosmology that has correctly predicted and explained discoveries in the space age.

Read the paper published in The Secular Heretic. 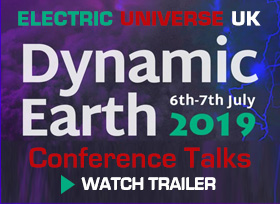 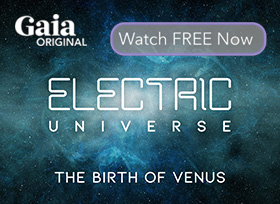 Wal Thornhill and Ev Cochrane delve into ancient tales of a goddess with disheveled hair or a head full of snakes that may explain a massive change to our solar system as a new heavenly body joined it.

Scroll down to mid-page, center video and watch for FREE Episode 4: “The Birth of Venus”.

This Guide is intended for anyone who wonders how our Universe really works, and who might be interested in an intriguing and somewhat different point of view. Readers may be surprised to discover that many well-trained skeptics do not support popular ideas in astronomy and the space sciences. Contents ...
Continue reading >> 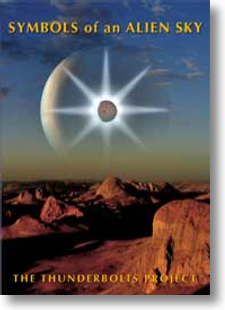 Symbols of an Alien Sky will introduce you to celestial spectacles and earth-shaking events once remembered around the world. Archaic symbols of these events still surround us, some as icons of the world’s great religions, though the origins of the symbols appear to be lost in obscurity.
View video 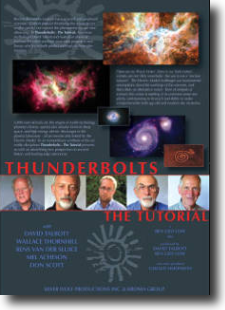 Stars in an Electric Universe. This exceptional lecture by Wallace Thornhill was delivered as the John Chappell Memorial Lecture at the Natural Philosophy Alliance Conference in 2011.
More info. Order link

The Lightning-Scarred Planet Mars. In this second episode of SYMBOLS OF AN ALIEN SKY, David Talbott takes the viewer on an odyssey across the surface of Mars, finding that only electric arcs can produce the observed features.
More info. Order link

The Electronic Sun and Returning Science to Real Physics. These two lectures by Donald Scott and Wallace Thornhill were high points of the EU2012 conference.
More info. Order link

Thunderbolts of the Gods. David Talbott and Wallace Thornhill introduce the reader to an age of planetary instability and earthshaking electrical events in ancient times. If their hypothesis is correct, it could not fail to alter many paths of scientific investigation.
More info. Order link

The Electric Universe. In language designed for scientists and non-scientists alike, authors Wallace Thornhill and David Talbott show that even the greatest surprises of the space age are predictable patterns in an electric universe.
More info. Order link