thunderbolts of the gods – preview 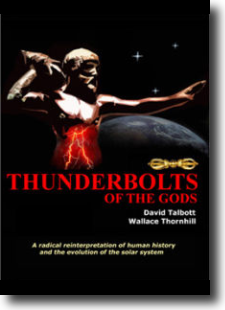 Thunderbolts of the Gods

By David Talbott and Wallace Thornhill

Thunderbolts of the Gods by David Talbott and Wallace Thornhill introduces the reader to a former age of planetary instability and earthshaking electrical events. The 108-page full-color monograph, based on the life’s work of the two authors, offers a revolutionary synthesis of historical investigation and the newly discovered Electric Universe.

Talbott and Thornhill claim that cosmic upheaval occurred so recently as to have profoundly affected early human cultures, provoking “incomprehensible” myths, symbols, and commemorative practices. Through a synthesis of ancient testimony, high-energy plasma experiments, and space age discoveries, the authors bring the ancient world to life. If their hypothesis is correct, it will surely alter many paths of scientific investigation as well.

The little-known study of powerful electrical discharges in plasma is a new and exciting development in plasma cosmology, with profound implication for space age astronomy. Talbott and Thornhill have followed these developments because they see plasma science as a bridge between the ancient and modern worlds. To advance their case, they present side-by-side comparisons of laboratory plasma experiments and globally recurring symbols of the ancient sky. The evidence, they report, shows an ancient obsession with extremely violent electrical discharge formations in the heavens.

At the core of this reconstruction lies the unique behavior of plasma. Plasma, often called the “fourth state of matter,” has been studied for less than a hundred years, and only in the recent decades of the space age have some physicists begun to realize its importance to the understanding of structure in space produced by electric currents. All stars and astronomical objects ranging from supernovae to beautiful filamentary nebulae are now known to be constituted of plasma—a conductive medium that permeates the near-vacuum of space. Charged celestial objects move within insulating cells of plasma that may discharge spectacularly upon close encounters. The plasma discharge currents take complex filamentary forms resulting in the panoply of astonishing structures seen by Hubble and other new telescopes. From these discoveries, a new approach to the understanding of the physical universe is emerging. This approach is called plasma cosmology.

Through unimaginable labors, our ancestors carved unexplained pictures on stone, numbering in the tens of millions. But what inspired this massive endeavor around the world? The laboratory experiments make clear that the ancient artists were copying spectacular electrical phenomena in the heavens. Indeed, the global correspondence between laboratory discharge forms and the pictographs on stone is so detailed that same-scale images.< Quotes