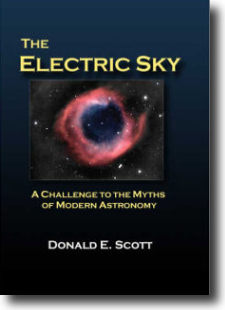 A retired professor of Electrical Engineering, Dr. Donald Scott has produced 256 pages of compelling material on the Electric Universe and plasma cosmology. His insights, punctuated by a delightful sense of humor, destroy the sensational and fantastical constructs of “gravity only” cosmology, replacing them with lucid and down-to-earth explanations of space age findings. From start to finish, the book is grounded in a practical understanding of electric currents in plasma.

Dr Scott systematically unravels the myths of Big Bang cosmology, and he does so without resorting to black holes, dark matter, dark energy, neutron stars, magnetic reconnection, or any other fictions needed to prop up a failed theory.

The book contains sensible science for the experts. It is also an exceptional primer for general readers, highlighting the latest developments in plasma science and astronomy. Chapters in the book include a historical overview, an in-depth exploration of the electric sun, and a review of astronomer Halton Arp’s challenge to Big Bang cosmology. Dr. Scott offers new perspectives on quasars, galaxies, and gamma ray bursters. Of special interest to many will be his explanation of the solar magnetic polarity reversal, something that has long baffled solar physicists. For anyone exploring the new vistas opened by the Electric Universe, this book is a must read!

Not surprisingly Dr. Scott’s has already begun to receive enthusiastic reviews from plasma scientists and experts in electrodynamics.

I really love this book. It is causing me to rethink a great deal of my own work. I am convinced that The Electric Sky deserves the widest possible readership…. I felt genuine excitement while reading and felt I was delving into a delicious feast of new ideas.
~ Gerrit L. Verschuur, PhD, University of Manchester. A well-known radio astronomer and writer, presently at the Physics Department, University of Memphis.

You don’t have to be an astronomer to enjoy this book. It’s an exciting story about how a small group of physicists, engineers and other scientists have challenged the ‘establishment’ – the ‘big science’ astronomers who are reluctant to listen to anyone outside their own elite circle.
~ Lewis E. Franks, PhD, Stanford University, Fellow of the IEEE (1977), Professor Emeritus and Head of the Department of Electrical & Computer Engineering, University of Massachusetts (Retired).

Gravity was the focus of 20th century astronomy. For the 21st century, it will be electromagnetism and plasmas in addition. This forthcoming scientific revolution is presaged by the rapid pace of discoveries about our own star, the Sun, and its total plasma environment, and discoveries about the nature of the interstellar medium.
~ Timothy E. Eastman, PhD, Head of Raytheon’s space physics and astrophysics groups.
http://www.plasmas.org/space-astrophys.htm

It is gratifying to see the work of my mentor, Nobel Laureate Hannes Alfvén enumerated with such clarity. I am also pleased to see that Dr. Scott has given general readers such a lucid and understandable summary of my own work.
~ Anthony L. Peratt, PhD, USC, Fellow of the IEEE (1999), former scientific advisor to theU.S. Department of Energy and member of the Associate Laboratory Directorate of the Los Alamos National Laboratory. 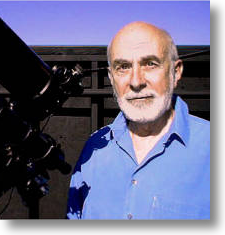 Donald Scott earned his Bachelor’s and Master’s degrees in Electrical Engineering at the University of Connecticut in Storrs, CT. Following graduation he worked for General Electric in Schenectady, NY, and Pittsfield, MA. He earned a Doctorate in Electrical Engineering at the Worcester Polytechnic Institute, Worcester, Massachusetts, and was a member of the faculty of the Department of Electrical & Computer Engineering at the University of Massachusetts/Amherst from 1959 until his retirement in 1998. During that time he was the recipient of several good-teaching awards. He was, at various times, Assistant Department Head, Director of the undergraduate program, Graduate admissions coordinator, and Director of the College of Engineering’s Video Instructional Program.

In 1987, the McGraw-Hill Book Company published his 730-page textbook, An Introduction To Circuit Analysis – A Systems Approach. He has authored numerous scientific papers and chapters.

He is a lifelong amateur astronomer. Some of the author’s images of astronomical objects can be viewed here.

1. Introduction
2. Science Rules
3. Some “Ugly Facts”
4. How Big Is the Space Around Us?
5. The Case of the Missing Matter
6. The Case of the Missing Neutrinos
7. Cosmology’s Roots
8. The Plasma Pioneers
9. Shake Hands With the Plasma
10. The Electric Sun
11. The Sun’s Electrical Atmosphere
12. Open Magnetic Fields and Other Fictions
13. The Solar System
14. Stars (Electric Cosmology)
15. Stragglers, Bursters, and Pulsars
16. Galaxies
17. Redshift and the Big Bang
18. Lowering the Drawbridge
App. A: Birkeland Currents
App. B: Computation of Redshift Values
App. C: Solar Electron Flux
App. D: Open Letter to the Scientific Community

Through unimaginable labors, our ancestors carved unexplained pictures on stone, numbering in the tens of millions. But what inspired this massive endeavor around the world? The laboratory experiments make clear that the ancient artists were copying spectacular electrical phenomena in the heavens. Indeed, the global correspondence between laboratory discharge forms and the pictographs on stone is so detailed that same-scale images.