These are DVD’s of selected presentations given at the first annual conference of The Thunderbolts Project in Las Vegas, January 6-8, 2012, entitled: Electric Universe 2012: The Human Story 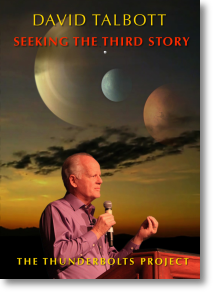 2 Lectures by David Talbott
According to author David Talbott, all of human history can be seen as just two stories. First, came the story of ancient mythology, when towering gods were said to have ruled the world. Then came the story of science, emerging from a growing distrust of the myths and a new emphasis on direct observation and reason.

This DVD includes two full talks by Talbott, given at the first annual conference of The Thunderbolts Project in Las Vegas, January 6-8, 2012. The second lecture takes up the “acid tests” of his historical analysis. The celestial formations he reconstructed have nothing in common with our observed world today. But the ancient records of these forms occur in extraordinary number and detail; all are inseparably connected to each other; and together they constitute a unified substructure of ancient thought—the archetypes or points of agreement between cultures around the world. In combination the ancient memories and practices confirm spectacular celestial forms above our early ancestors. The global integrity “cannot be by accident,” Talbott assures us.

These lectures take the student of planetary catastrophism into a deeper and more convincing understanding of human origins. 1 hour 52 minutes 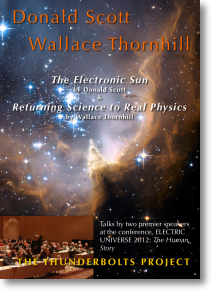 Donald Scott
Retired professor of electrical engineering Donald Scott describes an analogy between observed solar activity and the well-known behavior of solid-state transistors. Astronomers have no idea what causes the fluctuations in the solar wind. The transistor analogy represents a simple and understandable mechanism, publicly presented for the first time at the EU 2012 conference.

In its appeal to direct evidence and common sense, the Electric Universe requires a field of view much broader than that offered by specialized science, according to EU theorist Wallace Thornhill. A physicist and natural philosopher, Mr. Thornhill has spent decades questioning popular ideas about the physical world.  In the past 15 years, he has laid a broad foundation for the Electric Universe paradigm. 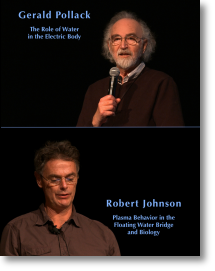 The Role of Water in the Electric Body

The role of water is central in understanding how biological systems work. Our body is 99% water molecules. At the interface of cellular material these water molecules become a highly structured liquid crystal medium. This liquid crystal carries charge and is in dynamic relationship to charge of tissue in the body and the electromagnetic energy in the environment we live in. Dr. Pollack is a professor in the bioengineering department of the University of Washington. He has spent the last 10 years researching the role of water in biological tissue. His discoveries will have a profound impact on the nature of disease and healing. 53 minutes

Filamentary current flow with self-organising electromagnetic structure is a fundamental mode of transport in plasma. Application of the same principles to the Floating Water Bridge phenomenon and to tubular biological flows reveals insights into hitherto unexplained behavior in both cases. Mr. Johnson is an independent researcher, a long-standing supporter of the Plasma Universe paradigm, and author of the original outline for the “Essential Guide to the Electric Universe.” 28 minutes 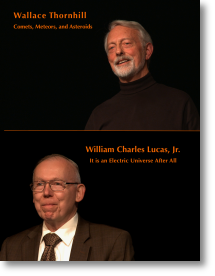 Popular comet theory has never worked.  The idea that comets are “dirty snowballs” or “icy dirtballs” evaporating in the warmth of the Sun is challenged by volumes of space age observation: an abundance of comet images and other data from several probes of comets, cometary dust samples, a close-up look at the impact of a projectile on a comet, measurements of charged particles in the comas of comets, considerable information on surface chemistry (including the baffling absence of water ice), and numerous observations of “impossible” comet behavior, such as discharging way too far from the Sun, explosive eruptions, and even breakup of comets.

Yet a new understanding of comets is gaining increasing recognition, and this new view has demonstrated a predictive ability far beyond that of the “standard” model. In fact, it has succeeded precisely where the standard model failed.  The new view places the emphasis on the electrical behavior of comets, in a dynamic relationship with an electric Sun.  Indeed, if comets are discharging electrically as they move through the Sun’s electric field, that fact alone will confirm a core tenet of the Electric Universe hypothesis. 36 minutes

It is an Electric Universe After All

It’s now possible to describe a universal electrodynamic force law that completes the goals of 19th century science, deriving gravity and inertia as electrodynamic forces between neutral electric dipoles. This approach predicts more experimental phenomena, including the decay of gravity, than previous theories, and it offers a promising foundation for the unification of the theoretical sciences. Mr. Lucas earned his doctorate in Intermediate Energy Physics from William and Mary in 1972. His important discoveries include a universal electrodynamic force law and a new theory of elementary particles in terms of closed charge loops giving rise to improved theories of the atom, the nucleus and molecules. 50 minutes 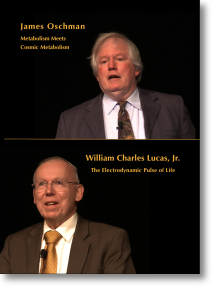 The human body contains various electronic circuits that regulate virtually every physiological process. Flows of electrons and other charged particles in these circuits give rise to biomagnetic fields that radiate from the body and interact with the fields of the earth and lunar, solar, interplanetary, and interstellar fields. Dr. Oschman is a biophysicist and international lecturer on the scientific basis for energy medicine. He is the author of two books and over 100 articles. 49 minutes

The Electrodynamic Pulse of Life

Every year that goes by we learn more about the electricity of life. Subtle electric currents and electromagnetic frequencies are pervasive in biological systems, all with powerful implications for human health and healing. Mr. Lucas earned his doctorate in Intermediate Energy Physics from William and Mary in 1972. His important discoveries include a universal electrodynamic force law and a new theory of elementary particles in terms of closed charge loops giving rise to improved theories of the atom, the nucleus and molecules. 34 minutes

video excerpt will be up shortly 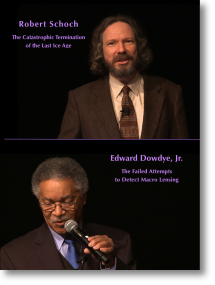 The Catastrophic Termination of the Last Ice Age

At the end of the last ice age, some 12,000 years ago according to standard dating, Earth underwent dramatic catastrophic changes. During this remote period there existed a stunningly sophisticated civilization, known from the archaeological site of Göbekli Tepe (in southeastern Turkey), which inexplicably disappeared. How? Why? As a Geologist and Geophysicist, Dr. Schoch has been instrumental in spurring renewed attention to the interrelationship between geological and astronomical phenomena, natural catastrophes, and the early history of civilization. 50 minutes

General Relativity proposes a bending of light in the vacuum of space around stars and galaxies.  But evidence shows it is the plasma rim of the Sun, not surrounding space, that bends light, and time-resolved images of stars orbiting Sagittarius A* do not show the predicted “Einstein rings”. Dr. Dowdye, originator of the Extinction Shift Principle, a dual challenge to General and Special Relativity, is an electrical engineer (former NASA) with degrees in mathematics and physics. 44 minutes