Dendritic or “tree-like” patterns typical of lightning and electric discharge are common throughout the natural world. Many of these are poorly understood. The most fully acknowledged instance geographically is the branching ravine pattern of fluid erosion. But the subject of the Dendritic Ridge Experiment reveals the opposite characteristic: material gathered into sharply sculpted, elevated terrain.

Examples of dendritic branching in nature pose many puzzles. The biological examples range far beyond the branching of trees or the veins of leaves. In humans and other living organisms, they occur in blood vessels and the neurons of the brain. Dendrites in snowflakes and other manifestations of crystallization are also well documented but poorly understood.

When it comes to electric arcs and sparks, the causes are more elusive than the direct observations. Is there an underlying dynamic connection between lightning and other forms of dendritic branching? If so, perhaps the common factor is available pathways of least resistance as occurs in the dendritic patterns of fluid drainage guided by gravity.

Our interest here is not branching ravines but material gathered into sharply sculpted, elevated terrain. An electric arc producing a Lichtenberg figure on a surface does not, in itself, provide the three dimensional morphology of dendritic ridges–the formative process this experiment seeks to demonstrate more fully.

Occasionally, weak dendritic-like morphologies appear in avalanching, in wind-blown dust and in water seeping through sand. But in none of these instances is there a sufficient match to the dendritic ridge forms and contexts on the surface of Mars, our primary reference in this experiment. 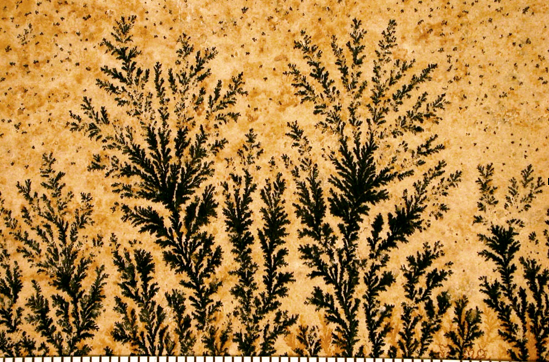 Manganese dendrites in limestone. Such crystalline structures are often misread as petrified plants. Scale in mm. 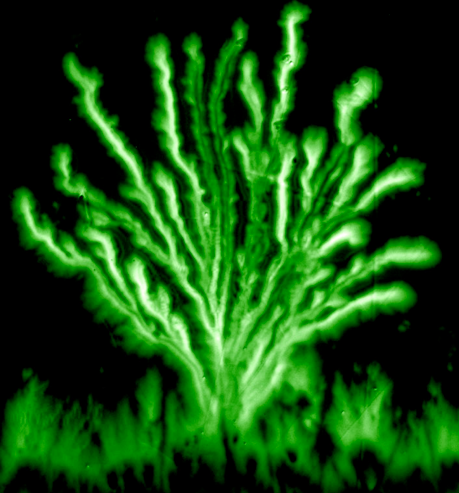 Dendritic ridges on Mars appear in a pristine form, with little or no weathering. For this reason, they stand out clearly from their surroundings, and this allows an observer to identify the telltale electrodynamics of dendritic ridge formation.

Nevertheless, it is essential to distinguish between what is known, marginally familiar, and largely unknown. From the Electric Universe perspective, localized filaments of stranded charge attracted great volumes of available dust, sediment and debris to produce elevated dendritic forms in the wake of stupendous discharge events.

Often these forms can be seen along nearly vertical inclines where formation by erosion would be impossible. The overriding consideration appears to be charge redistribution affecting a massive movement of material.

Observed geomorphology suggests that erosion and weathering degrade dendritic ridge forms wherever such weathering potential is available. For this reason, great mountain ranges on Earth, while revealing distinctive dendritic forms, exhibit numerous residual extensions of dendritic ridges at lower levels. These often appear to have been severed from the parent formation by erosion.

Dendritic formations on both Mars and Earth have received too little attention, and too many unanswered questions remain. The Dendritic Ridge Experiment will help to settle profound questions left unanswered after decades of space-age exploration. The results should lead to many additional experimental tests of the Electric Universe. 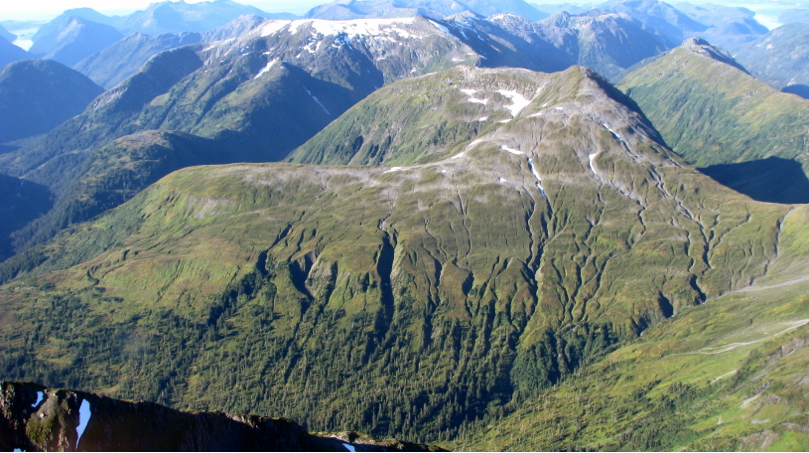 On earth, natural erosional processes will degrade dendritic ranges over time. The process is particularly evident in foothills that appear to have been progressively disconnected from earlier dendritic forms, leaving localized drainage ravines and rounded summits. Most larger mountain ranges have preserved their well-defined dendritic forms across apparent geologic time scales. 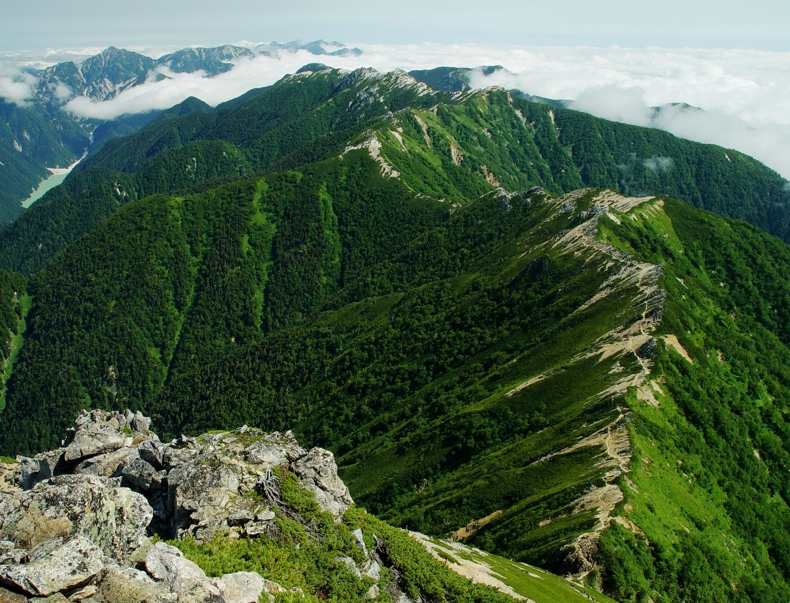 Erosion along steep inclines evident in this image of a “dissected plateau” can only distort the pristine dendritic form of the larger mountain system. In aerial views, such eroded ridges often present a familiar fish bone pattern, readily distinguished from the larger dendritic morphologies of the mountain ranges of which they are apparently an inseparable part. 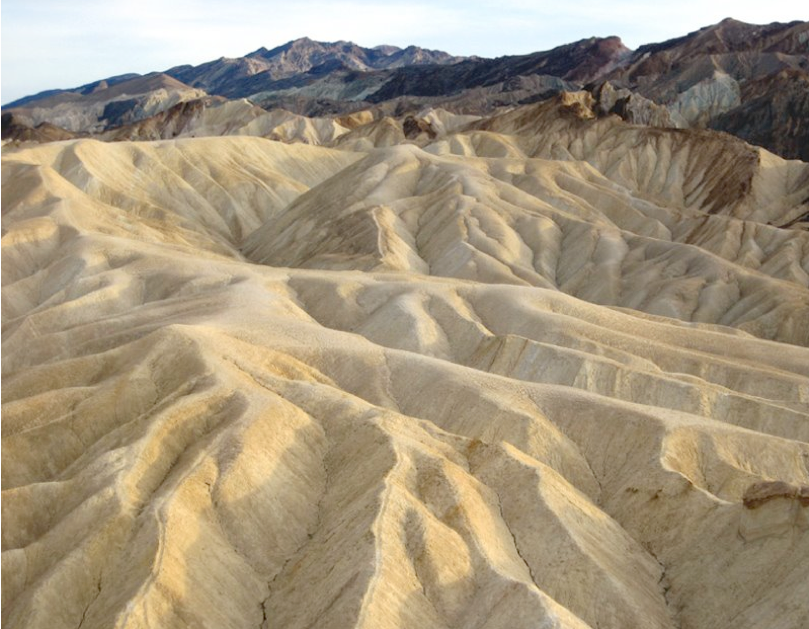 Zabriskie Point near Death Valley. Erosional degradation of what was likely an extension of a dendritic range can produce much confusion as to formative processes. Credit: www.cedarandsand.blogspot.com 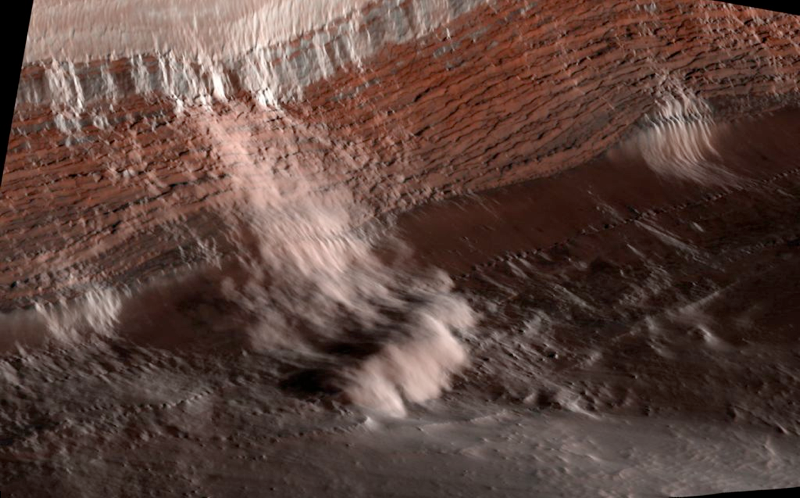 Examples of Martian avalanching are observed, but the effects do not look like dendritic ridges.  Credit: www.thethirdplanet.de/mars_gallery/Dust_Avalanche/page-0006.htm 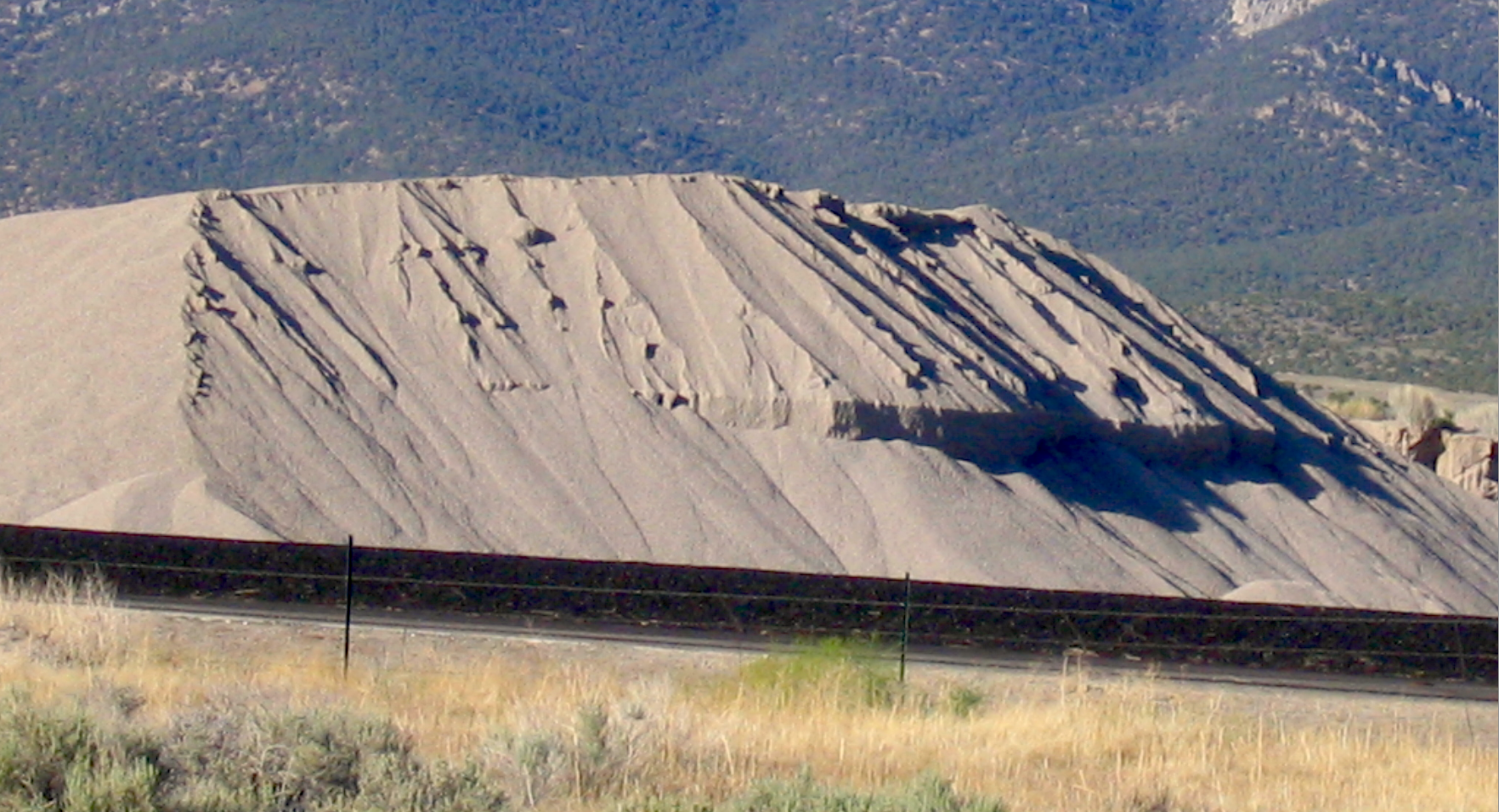 The avalanching in this sand or gravel pile might be confused with certain dendritic forms on Mars, though the comparison falls short with attention to detail. The emphatic feathering and lateral dendritic extensions on Mars require something more than gravity acting on fluid or loose debris. Also, avalanche pathways typically exhibit accumulations at the termination, which are not seen in dendritic ridge system. Credit: Michael Gmirkin