Home Picture of the Day Oxygen on Rhea 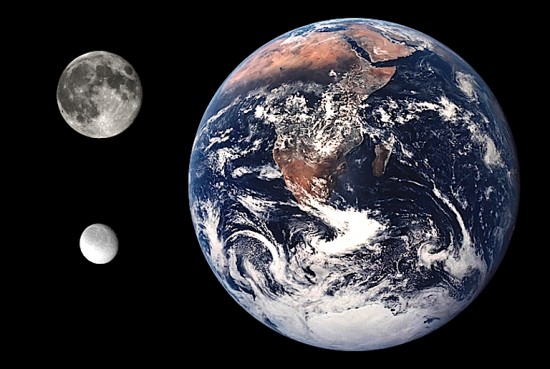 Rhea compared to Earth and the Moon.

Where did the extremely rarified atmosphere on Rhea come from?

Relative to Saturn, Rhea is most likely negatively charged. Saturn’s powerful opposite charge is probably initiating an electric discharge, causing the water in Rhea’s icy surface to dissociate, so the presence of oxygen around the moon is not unexpected. Along with the water ice, the presence of frozen carbon dioxide most likely contributes to its atmosphere for the same reason.

There is no need to conjure implausible inertial dynamics (“tides” or “gravitational kneading”) to account for these remarkable events. By that same token, the possible ring formation around Rhea is the remains of the pulverized rock and ice that billions of watts of electricity created when they catastrophically passed through the moon’s conductive strata.

Contemporary electrical interactions between celestial bodies are nothing like what must have taken place in the past. Rhea’s surface is fractured and carved in ways that point to surges of energy that were great enough to nearly destroy the moon. There appear to have been explosions big enough to rock the planetoid, but there are no boulders or blocks of stone that would be expected as a result.

Electric Universe proponent, Jim Johnson argues that Rhea’s attenuated atmosphere could be due to the effects of electrical bombardment from Saturn, similar to what is happening on Enceladus:

“If the surface is nearly all water ice, then the presence of oxygen is fairly easy to figure out, given the electromagnetic environment and charge differential with respect to Saturn. Another [factor], is that not only complex organic molecules (which have not been directly observed or identified), but possibly mineral deposits containing carbonates (CO3 anions) [are present].

“Carbonates are a class of minerals which are carbonate salts, that is, metals combined with a negative grouping. It is my argument that incident charged particles may well ionize or disassociate either or both the water and the carbonate minerals on such surfaces. Once CO3 is separated from a pair of magnesium or a calcium ions, you have the makings of both oxygen and CO2: 2(CO₃) ⇄ 1(O₂) + 2(CO₂). Carbonates have the right amounts of carbon and oxygen [necessary] to create those two specific gases. Water alone doesn’t have the carbon—hence the search for carbon bearing compounds, which leads, naturally enough, to the thought of organic chemistry.

“The downside to that argument is that Rhea and other inhospitable bodies may never have had the type of organic chemistry we think of (life) that results in ‘complex organic molecules‘. Carbonates are among the simplest carbon-bearing molecules. Their association with minerals is widespread if there were ever water. The presence of water ice implies that there was. The remaining question is, are there surface minerals on Rhea, and if so, are they limestone and related minerals and rocks, possibly verifiable by spectroscopic evidence of magnesium or calcium”?

Electric Universe advocates argue that Saturn moves within the plasmasphere of the Sun and interacts with the Sun’s electric field. Planets and moons in the Solar System are charged bodies: they are not isolated in space, but electrically transact with each other. Rhea moves within the plasmasphere of Saturn, so it stands to reason that it would interact electrically with its primary. The source of oxygen and carbon dioxide on Rhea is really no mystery.

Editor’s note: Jim is the editor and illustrator of Bob Johnson’s Essential Guide to the Electric Universe on the Thunderbolts.info website. He has an architecture degree and is a retired acoustician, a former military pilot and an amateur astronomer with a multidisciplinary interest in the sciences.