Dark Minette spills from the center of Shiprock, surrounded by a broken sheath of lighter, distinctly different rock.

In Lightning Scarred Earth, Part 1,  Shiprock was presented as an example of a pinnacle created by lightning. Fulgarites are created when lightning strikes and current penetrates the ground, leaving a hollow tube of glassy, fused material behind. Current from the lightning vaporizes and extracts material in its path, while its heat vitrifies the surrounding soil, leaving behind glassy tubes.

Dikes radiate from Shiprock in a star pattern.

Based on its features, it’s proposed that Shiprock is a standing fulgarite, created by lightning so powerful and sustained that the material began to recombine in the current as it was pulled from the ground, leaving behind a pinnacle of fused material instead of a hollow tube. Once material recombines, it’s no longer charged and attracted to the lightning channel, so is left behind, its ionic makeup altered by the current and heat.

Minette is high in potassium and low in silica content. It contains high volumes of orthoclase and biotite. Both are minerals with high metal content, such as potassium, iron, and sodium.

Silica dioxide will readily exchange oxygen with metals, such as those found in the orthoclase and biotite when sufficient heat is applied. The prevalence of potassium and other metals crystallized in Minette and its under-saturation of silica is evidence of the reduction taking place as it was formed.

This suggests that the lightning forming it was positive lightning, which is the type of powerful lightning seen striking from the stratospheric anvil clouds in thunderstorms. Electrons and negative ions in the ground pulled out by the positively charged lightning left behind a concentration of positively charged material which was not attracted and drawn away. The dikes and the inner core of the pinnacle show the path of the current being drawn to the lightning discharge.

Following the lightning strike that formed the pinnacle, the area was left with a net positive charge, which attracted a secondary ground discharge, or arc blast that emanated from a different discharge process. This secondary discharge will be explored more in the future, but it’s worth mentioning now because it left a magnificent Lichtenberg pattern across the ground, unique to the area immediately surrounding Shiprock.

The next series of images shows the evolution in the magnitude of this type of formation. These are all examples from the four corners region in Northern Arizona.

First, when lightning similar in magnitude to what we see today strikes the ground, it sweeps surrounding surface sand to it, drawing it to the lightning channel and creating a shallow crater. Examples of this were shown in Part 1, where lightning created small craters with a pile of sand left behind in a small cone.

Again, these are not anthills, although they could easily be mistaken for them on cursory examination. There are no ants, no opening in the mound, and it’s dusted over the top with sand fused into pebbles. The pebbles rest in a thin layer over the top, like sprinkles on an ice cream cone. Beneath is powder fine sand.

The top layer was formed from sand pulled into the lightning channel and fused into pebbles by heat, then dropped back on top of the mound when the flame extinguished. They bear the same character as the Minette material in Shiprock’s center and dike formations. All of the mound material and surrounding sand measures high in pH.

The following images show buttes at various stages of growth. The first exhibits an up-welling of Minette. The second and third images show the broken remains of the sheath, and the last image shows the dark Minette partially surrounded by the lighter rock sheath.

Because the Earth is generally a negatively charged body, at least in terms of ground charge, it forms a double layer at the interface with the atmosphere. When a thunderstorm forms and the electric field strengthens, positively charged ions in the atmospheric zone of the double layer collect above the ground beneath the storm.

Before negative cloud-to-ground lightning strikes, it pulls this material into positive ionic streamers that reach up to connect with the electron avalanche produced by the cloud. When the streamer and avalanche leader connect, a circuit is completed and current discharges through the channel, electrons flowing to ground and positive ions flowing up to the clouds.

The magnetic field created by the current wraps tightly around the channel, compressing it to a narrow path in what is known as a Z pinch. ‘Z pinch’ has been demonstrated in the lab by simply passing current through an aluminum can, with the electrodes connected at the top and bottom. The resulting pinch crushes the can into an hourglass shape.

In the huge primordial storms that we theorize occurred in Earth’s past, such lightning and pinch effects resulted in huge amounts of positive ionic material being swept to the lightning channel with such extreme force it sometimes created supersonic winds.

Fulgamites formed by sustained, giant cloud-to-ground arcs display the effects of discharging current, accumulation of ionic dust, Z-pinch, and the supersonic winds and shockwaves they produced. The images presented show the progression of such an event.

First, the strike forms a raised platform, with a shallow crater in the center where the lightning created an electrode spot. The rim of the crater is material swept inward by ionic winds and fused. There is a road cutting through the crater in the first image to give some perspective how large the feature is. These images are from Arizona, near Pastora Mountain.

A more sustained strike begins to accumulate neutralizing material on the spot, forming a flat-topped dome, like a pancake. As the material accumulates, the pancake grows to a mesa-type structure, held together in a round form by the magnetic pinch.

In the next phase of growth, the mesa grows taller and the inflow winds begin to reach Mach speeds, creating shockwaves that mold the rim material into triangular standing waveforms. A detailed discussion of this shock wave and the triangular buttress formations they create is presented more fully in previous articles on Arc Blast.

Mt Hillers, Utah — Ringed by shock-formed buttresses, Mt. Hillers lies in a complex of lightning-formed mountains. Less developed craters and domes can be seen behind it.

As neutralized material builds, the anode spot the lightning connects with is at the top of the mesa and rises with it. The strength of the pinch narrows the top forming a cone, and new regions of windblown, fused and shock-shaped buttresses form rims outside the older rim.

Left to right, Buster Mountain, southern Arizona — The conical head of a fulgamite and concentric rows of granite buttresses. The dark vegetation band below rocky buttresses shows a consistent angle of dip created by wind-blown deposition.

The difference between lightning-formed pinnacles like Shiprock and the broad mountain forms shown in these images seems to be polarity in the lightning. This interpretation is preliminary, but it appears that positive lightning burrows into the ground to connect with negative ionic matter beneath the surface, whereas negative lightning attracts surface winds and dust to it.

Positive lightning raises a narrow pinnacle of negatively charged material that boils up from the ground with dikes which display the current path through the subsurface. Not much material is drawn to it from the surroundings, except for the sheath of rock it forms around it.

Negative lightning connects with pools and streamers of positively charged matter at the surface and pulls huge amounts of airborne dust to create a dome with hardened, buttressed rims.

In both cases, mountains can form around them due to ambient winds and blowing dust. Positive arc fulgamites can form monoclines along the dikes if ambient, supersonic winds strike them to create a standing wave, where dust piles into long, linear ranges of triangular waveforms.

The last images above, taken at Comb Ridge monocline in northern Arizona, shows where fulgamites and dikes are exposed in the monocline. These protrusions created a shock wave in Mach speed ambient winds that formed a linear standing wave, against which the monocline was formed like a dune, as blowing dust accumulated. There are several monoclines on the Colorado Plateau that exhibit the same or similar features.

Negative arc fulgamites create their own winds, bringing dust to pile against them from all directions, and if powerful enough, form standing shockwaves that generate buttresses in a ring around the base.

Circular fulgamite features in and around Pastora Mt, Arizona

The circular craters and mesas in the images were formed by lightning while the mountain was expanded by wind-borne dust accumulating around them. There are several examples of mountains with these features in the Four Corners region.

Mountains are a misunderstood feature of the planet. Geological concepts are based on rocks forming deep in Earth’s crust and being exposed by erosion and tectonic motions, entailing, of course, hundreds of millions of years. It’s a very complex process that has not, and cannot, be witnessed or confirmed by experiment.

Mountain formation by wind and electric discharge, however, can be witnessed in nature. Sand dunes are a prime example. Mountains can also be produced in laboratories. So can rock. It happens when slag is produced from welding, ore and metal processing, or from chemical reactions like cement. Atomic and molecular bonding is an electrical process — the exchange and sharing of electrons.

Electricity and wind is a far more plausible mechanism for mountain building than what is proposed by the consensus theories. Especially since the actions of wind and lightning that formed mountains on Earth can be seen in any thunderstorm. One only need extrapolate the forces and energies involved to what they would have been when Earth was in a much stronger electrical environment.

Amplify the electric field of a thunderstorm by orders of magnitude, and it will produce an ionized atmosphere, screaming with supersonic winds, ionized dust, and incredible discharges of lightning that dwarf what we experience today. For examples, we need only to look at our neighboring planets. These conditions exist on Jupiter, Saturn, and Venus. Why would Earth be any different? 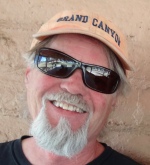