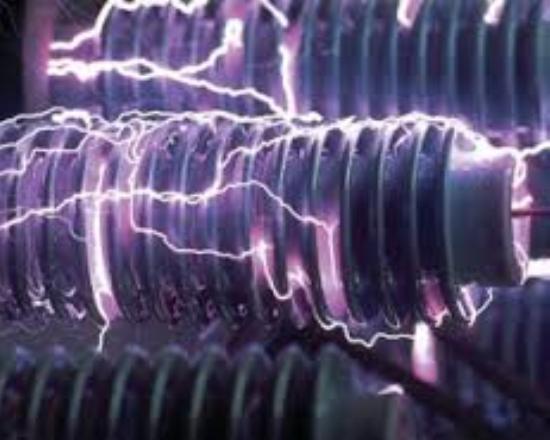 When high voltage electrical circuitry is sufficiently overloaded, or damaged, the current will seek alternative conductive paths to discharge to ground. It causes a dangerous event called an arc flash. Arc flash occurs when the current discharges in an arc through the atmosphere.The result is explosive. Arc heat far exceeds the surface temperature of the Sun, in excess of 35,000 °F (19,400 °C). It’s hot enough to vaporize copper conductors, producing an expanding plasma with supersonic shock-wave pressures over 1000 psi. It releases radiation across the spectrum with such energy, it will vaporize, melt and ablate materials far from the arc itself. No contact is required with an arc burn. Damage occurs from the searing hot blast.

An arcing fault discharges to ground along the path of least resistance the same way a lightning bolt does. It is conducted through plasma formed by ionized air. Like a lightning bolt, it can be a single spark, or it can fork into a sheet of filaments that jump across gaps and craze across surfaces. The reason arcs tend to craze a surface has to do with a thing called surface conductivity.

Surface conductivity is a highly conductive path, where, in a charged environment, solids collect a layer of counter ions around them. The ions build-up near current flows and highly conductive materials, such as minerals and water, due to a phenomena called the Corona Effect. The layer of ionic concentration that results surrounds the solid surface in a plasma double layer, providing a pathway for arcing currents.

Arcing, surface conductive currents can be shown to be a significant influence in Earth’s geology. But one must imagine an arc of truly colossal size…

Astrobleme is a term for an ancient crater. Typically, craters are recognized as round depressions with raised rims and central peaks, commonly thought to be caused by meteorite impacts. Another type of astrobleme can be created by an air-burst meteor, when no rocky meteorite material actually impacts the ground. Instead, the meteor explodes in the upper atmosphere, and its solid matter atomizes to form a bolide of plasma.

The plasma fireball carries the same speed, trajectory, and energy as the original meteor, and essentially blow-torches the earth, creating the astrobleme. The “crater” in this case is typically a teardrop, or butterfly blast zone of ablated material with a hogback hill down the center. The long hogback is analogous to the central peak in a round crater, and is thought to be formed by blast melt sucked inward by supersonic winds in a central updraft, like those in the ‘stem’ of a thermonuclear mushroom cloud. This central hill, or blister, defines the path of the plasma bolide as it streaks down at an oblique angle.

Meteor researchers, Dr. Mark Boslough and team at Sandia National Laboratory, have simulated the effects of an air-burst meteor. Dr. Boslough is a noted expert on air-burst meteors, having researched events such as Chelyabinsk and Tunguska. At 21-seconds into this video, their simulation records the fireball’s downward blast of hot plasma, pushing a shock wave with heat and pressure that melts and ablates the ground below.

When the shock-wave rebounds violently upward, rising winds shear a column of updraft opposite to the downward blast. This supersonic updraft, Dr. Boslough theorizes, vacuums molten ejecta into the strike zone, leaving a characteristic air-burst astrobleme — a linear hill with a sharply peaked ridge and distinctive triangular buttresses on the flanks, surrounded by an outwardly blasted zone of molten ejecta.

The astrobleme characteristics, and in particular, the distinctive triangular buttress features that distinguish them, is explained by rogue geophysicist, “Craterhunter,” in this well written article, A Catastrophe of Comets.

The Sandia simulations show how a bolide, screaming into the atmosphere at a low angle, can blister a mountain in a searing instant. These mountains are seen all over the world. It is a bold and unconventional theory that realistically describes these types of hills much better than conventional geology.

The defining feature of the astrobleme is the repeating pattern of triangular buttresses that display harmonic repetition in shape, size and frequency. They flank linear hillsides all over the world, across slopes from near horizontal to vertical, and across rock types from sandstone sediments to schist and granite, yet they display the same harmonic patterns.

Harmonics are evident where multiple wave-forms are “nested” within larger wave-forms. When nesting waves occur in whole integer multiples of the larger wave-length they are nested within, it is a signature of harmonic resonance. The triangular buttresses appear to be harmonic waves similar to the patterns of reflected waves a linear resonator would make. No Uniformitarian process of random faulting, subsidence, uplift, slumping, and eons of wind and rain can account for harmonics.

Look closely and try to count how many octaves are present on these mountainsides:

Triangular buttresses are a consequence of reflected shock waves — interference patterns of super-positioning pressure ridges formed by shock waves from the passing bolide. The chevron pattern of the reflected waves can be discerned in the atmosphere trailing the F-18 in the photo below. Shock waves travel in any medium–gas, liquid, or solid–as well as electromagnetic fields and plasma. Supersonic ionic-winds, heavily clouded with molten rock and dust, form a plasma medium that is molded by the reflected waves. The shock waves fuse these buttresses to the mountain as it is built by the supersonic in-flowing winds.

Earthquakes produce shock waves, too. So, there is a conventional theory of how triangular buttresses can be formed by surface waves from an earthquake. The “Love Wave” and similar models could theoretically cause faulting that produce a triangular buttress. It is a simplistic model that is inadequate to explain the complexity of features actually seen in nature, however.

For one thing, the type of faulting predicted by surface waves is not evident on many buttress formations. Instead, they have a melted, layered appearance, as if consecutive layers of molten material were molded to the flanks of the mountains by supersonic winds — which is exactly what we theorize happens to form an astrobleme.

Nor does any conventional theory explain the surrounding areas of ablated ejecta blown away from the astrobleme crater. Ejecta blankets also show the evidence of supersonic winds, displaying conical flow patterns oriented away from the blast zone.

Each of these features; triangular buttresses of layered melt, radially vectored buttresses, and surrounding regions of molten ejecta, are highlighted in the following Google Earth images:

Dr. Boslough’s work demonstrates how a plasma bolide can sear the Earth, leaving an astrobleme with these features. It falls short however, in providing a complete explanation. The idea they are created by meteors from space doesn’t hold-up. Surface conductive fault currents complete the picture of how these astroblemes were formed.

A rain of bolides from comet fragments, or an asteroid, will travel in a specific trajectory – that’s physics – they can’t land at odd angles to each other, or follow sinuous paths across hundreds of miles of terrain. Yet that is what is seen:

These scars are not produced by fragments of comets, or asteroids. Surface conductive fault currents made these blisters. In some cataclysmic geomagnetic event, Earth’s normal current discharge through the atmosphere – the constant flow of energy through hurricanes, thunderstorms, earthquakes and volcanoes – overloaded, and essentially, short circuited. Sheets of lightning and plasma bolides, arcing through surface conductive paths above the ground, left these blisters.

Unlike a meteor bolide, electrical current doesn’t fly straight, yet it has the extreme energy to create the same temperatures and pressures as a bolide created by an air-burst meteor from space.

As it arcs across the land it is drawn to conductive soils; minerals and moist regions, to skip, branch and gouge divots. Ionized material it carries fires-off as bolides that strike land and leave teardrop astroblemes.

Magnetic fields around the plasma current induce rotation along the horizontal axis of its flight, modifying the speed of the winds. This effect causes some hills to be pushed over, shallower on one side and steeper, with more distinct triangular buttresses on the other. It blows the ejecta blanket asymmetrically, and it may carve a valley longitudinally down the center of the hill. These are all features typically seen and are the result of violent electromagnetic, supersonic blast events.

To understand more about how the Earth’s internal currents are induced by the electromagnetic environment of the solar system, see EU2015 speakers Bruce Leybourne and Ben Davidson explain theories of our electromagnetic environment and the hot spots of current welling inside the Earth. Now imagine those currents amped-up until they short circuit and produce surface conductive faults. The consequences are apparent in the features of astroblemes. But astroblemes only scratch the surface in the story of surface conductive currents. Other startling evidence will be explored in future articles. Your questions, comments and ideas concerning how surface conductive faults can help re-define our understanding of geology are welcome.