Home Picture of the Day Ripples in Clear Space 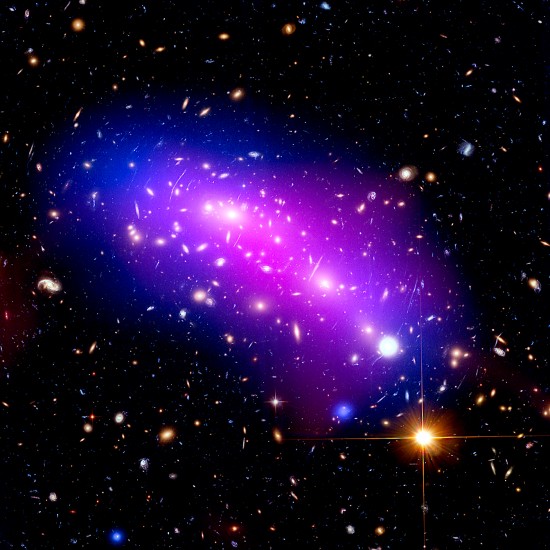 Where do galactic clumps and filaments come from?

One proposal suggests that galaxies are drawn toward the center of galactic clusters through gravitational attraction. What is termed, “blow-back force” by astronomers supposedly pushes galaxies out and away from the direction of travel like a vast comet tail.

However, all conventional theories cannot explain why gas temperatures sometimes exceed tens of million Kelvin, generating powerful X-rays and radio signatures. Supposedly, “ram pressure” creates friction as hot dust and gas “scrape against each other”, stripping material from other galaxies in clusters, although cosmologists still do not know why galaxies collect together in incredibly hot knots and tendrils.

It was noted in previous Picture of the Day articles that structures in the Universe are active energy sources—some galaxies eject charged matter out from their poles, or leave long braided tails extending for thousands of light-years. Smaller formations (stars and planetary nebulae) have hourglass shapes composed of tightly bunched filaments. Such filamentary structures are known as Birkeland currents.

According to a recent press release “gravitational lensing” is used to study galaxies that would not normally be visible because they are thought to be behind galaxy clusters. Gravitational lensing is the hypothetical way that gravity distorts the images of distant objects by “bending” light as it travels through space. Galaxies and galaxy clusters are thought to warp space because of their great masses (which requires stipulating a high percentage of dark matter in their computer simulations), so light does not travel in a straight line through regions of high density.

Astronomers believe that gravitational distortions are like ripples in water. As ripples pass over objects in water, it causes their apparent shapes to deform. As mentioned, it is that same effect on light passing through regions of varying density that is said to cause ripples in dark matter.

Distortions and redshift anomalies aside, filaments, knots, and voids are examples of electricity in space. Glowing “fireballs” of plasma come into existence through electromagnetic z-pinch zones in cosmic Birkeland currents. If astronomers were to analyze the Universe in terms of electric charges and the currents through space, rather than with fictional ideas like dark matter gravity and space warping like ripples in water, the shape of the cosmos would look much different.

It should be remembered that gravitational lensing theory is concocted from concepts related to mass and inertia, since consensus science views the Universe as kinetic. However, galaxies are made of plasma. Plasma’s primary aspect is one of electric charge, and electricity’s effects overshadow the effects of gravity on matter by a factor of 99 to 1, since 99% of all matter in the Universe is in the plasma state. Phenomena that require 96% dark matter gravity for their power can easily exist with only 4% plasma—the quantity of baryonic matter that astronomers think they observe.

“After all, to get the whole universe totally wrong in the face of clear evidence for over 75 years merits monumental embarrassment and should induce a modicum of humility.”
— Halton Arp