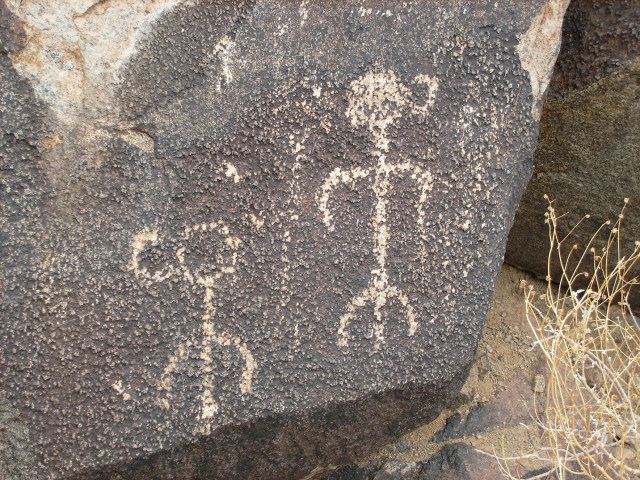 One of the most compelling aspects of Electric Universe cosmology is that it is visually apparent. A person can see a Peratt column in a petroglyph and reasonably conclude that our ancestors viewed a different sky than we do.

Or look at a telescope image of planetary nebula and recognize the hourglass shape of plasma current contracting to form a star.

Or view the red-shifted quasars inside Halton Arp’s “unusual galaxies” and determine if they are really the distant objects we’re told by conventional astronomy.

In fact, through Electric Universe eyes, it is clear that the patterns in nature, from galactic to nuclear, are coherent, fractal, and electric.

The planets and moons of the solar system provide some of the most accessible and compelling visual evidence of all. Hexagonal craters, rilles and the odd distribution of these features, often concentrated near the poles, or in one hemisphere, attest to an electrical formation. One can imagine the vortex of discharging plasma that carved them.

The central pillar of Mt. Fitzroy

Earth should also show electrical scarring.  In an Electric Universe it must be the case. But it is not intuitively apparent.

Unlike the Moon, or Mercury, Earth does not display a carpet of hexagonal craters. There are some craters that are ancient and eroded, but their formation remains controversial.

There does exist proof of electrical scarring on Earth, however, and it is in abundance. As a matter of fact, it is staring us in the face. This Thunderblog will discuss how to recognize it.

First however, recognize that what distinguishes Earth from a planet like Mercury, or the Moon, is its atmosphere and geomagnetic field. This changes the electrical character of the Earth entirely. It does not respond like a bald, rocky planet in an electric current, drawing lightning bolts from a region of space that carries a different electrical potential.

Earth acts like a gas giant, integral to the circuitry, with current flowing through as well as around it. But Earth’s current flows in a liquid plasma — the molten magma below the crust. In the event the system is energized, current discharges from within.

The evidence is in the extensive volcanism on Earth. Volcanoes straddle subduction zones at the edges of continental plates, rift zones and mid-ocean ridges. They betray the flow of current beneath the crust.

Surface evidence is in the mountains. Basin and range, mountain arcs, and mountain cordilleras are all proof of electrical discharge. To understand the visual evidence, however, requires looking beyond the simple concept of a lightning bolt from space. The reason is the Earth’s atmosphere.

Imagine a lightning bolt of immense proportions, sheets of lightning, in fact, arcing horizontally in this region that is roughly five to fifty thousand feet above the land. The focus of this article is the hydrodynamic effects of the resulting arc blast. Arc blast is the consequence of arc flash in a surface conductive current discharge.

The following image (annotated by the author) from Los Alamos Laboratories shows a shock wave being created by a supersonic projectile passing over water. The colors display density: highest in the red, lowest in the blue. Purple is the baseline of the atmosphere. It provides a very good analogy for the way a mountain is built.

The result of the arcs passing is embossed on the land by shock waves that act almost precisely as those made by the projectile.

The difference being  the shock wave is plowing land, not water, and it has the hyper-sonic velocity, heat and power of an arcing current — much more energy than a simple projectile.

The bow shock is an anvil of many thousands of psi at a temperature many times that of the sun, carrying charged electric fields. In a dense, viscous environment, fluid mechanics, shock effects and electromagnetism align in phase and frequency with the arc that creates them.

In Region 1, the bow shock vaporizes, and melts the ground, plowing an oblong crater.

Region 2 is a reflected shock wave blasting into the atmosphere, pushing an exploding cloud of vaporized debris into a Richtmeyer-Meshkov instability, more commonly known as a “mushroom cloud.”

The cloud is not shown in the projectile over water because that simulation did not involve the explosive effects of expanding gases heated instantaneously by an arc flash.

The mushroom cloud rises behind the shock wave with a supersonic vacuum at its core. The updraft of expanding gases generates in-flowing ground winds that scream like banshees across the ablated surface of the blast zone, attaining supersonic speeds as they funnel to the core of the updraft, dragging clouds of molten rock and dust. A simulation of such an event created by an air-burst meteor is portrayed in this video by Dr. Mark Boslough of Sandia Labs.

The ground winds are directed perpendicular to the primary shock wave. Keep this in mind, because it is very important evidence in the geometry of mountains.

In Region 3, a low pressure updraft forms, like the rooster tail behind a speedboat. The rooster tail pulls ablated melt from the crater. It forms the core of the mountain.

In Region 4, multiple shock reflections form triangular wave-forms. Note, the reflected wave bounces from the surface. The base of the triangle forms on the surface that reflects it.

The multiple shock reflections in Region 4 are standing waves. Standing waves don’t travel. The wave-form stays in place with the energy coursing though it. Reflected waves multiply, like in a hall of mirrors, repeating harmonic wave-forms to the nth degree, until the energy of the shock dissipates.

The reflected shock waves are rigid and stable when the energy is high, creating a shock ‘envelop’ over the ablated land. The energy does not dissipate quickly, because the vacuum of the mushroom cloud above is punching a hole through the atmosphere to space, drawing supersonic winds through the shock envelope like a cosmic vacuum. This is a source of free energy to the shock wave that keeps it alive.

Shock waves are highly energetic. They are razor thin sheets of pure energy, entire tsunamis in a sheet of glass. Like steel plates animated with resonate energy that derives from the original bow shock.

The incoming ground winds funnel through triangular plenums formed by reflected shock waves. The entire envelop of reflected waves acts as a coherent entity, with structural stiffness, resonating with the vibrations of the parent shock and the supersonic winds screaming through it.

It rides on the surface of the land, spread across the entire impact zone of the bow shock, like a multi-manifold vacuum cleaner, hosed to a hole in the sky above.

The winds plaster the mountain core with layered triangular buttresses. 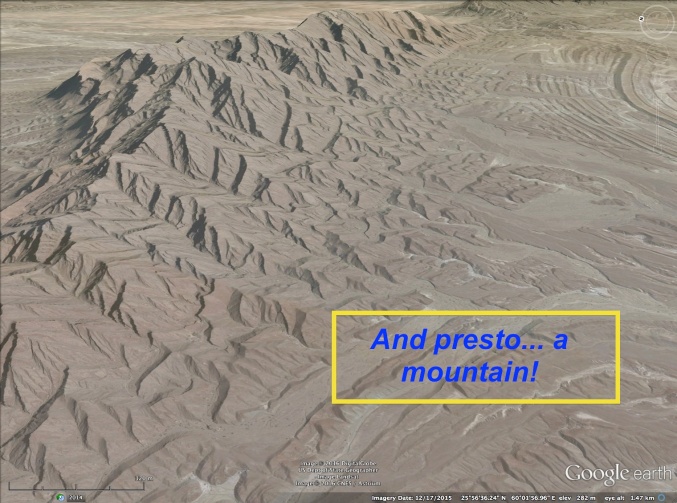 Shock reflections form at 90 degrees to the path of the shock wave that made them. Therefore, they emanate radially from the impact as seen in the Schlieren image of a bullet impact.

Hence, the orientation of triangular wave-forms holds information on the path of the initial shock.

It also vectors the supersonic wind flow, which layers the buttress in place. Therefore, wind direction is perpendicular to the stratified layers of the buttress and can be determined.

Examination of the coherent orientation of triangular buttresses dispels any notion they were made by random influences of wind and rain over the eons. The non-random, radial orientation of wave-forms is, in fact, impossible to explain except as the result of a single shock event that produced winds unlike anything we experience today. 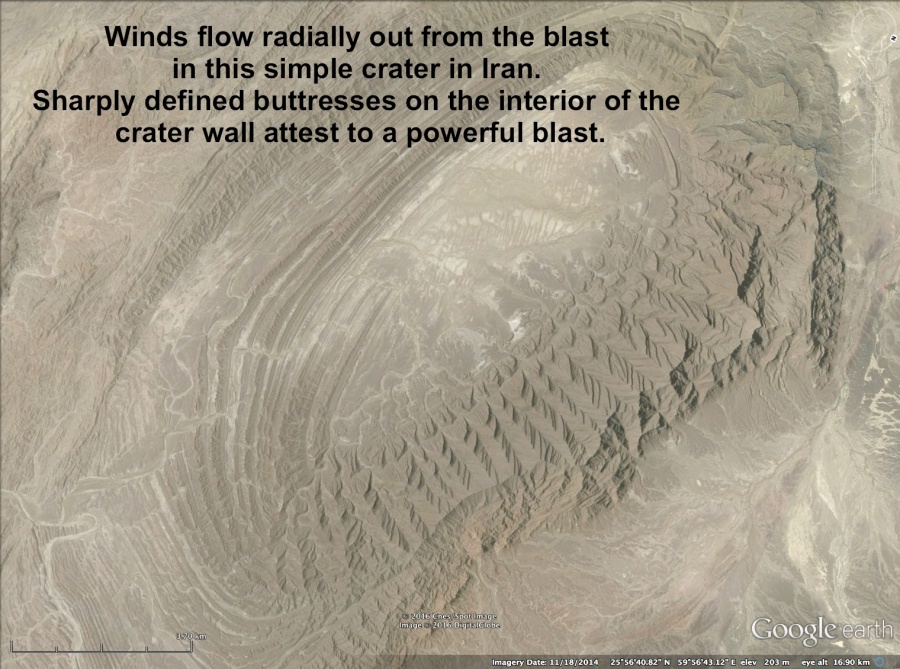 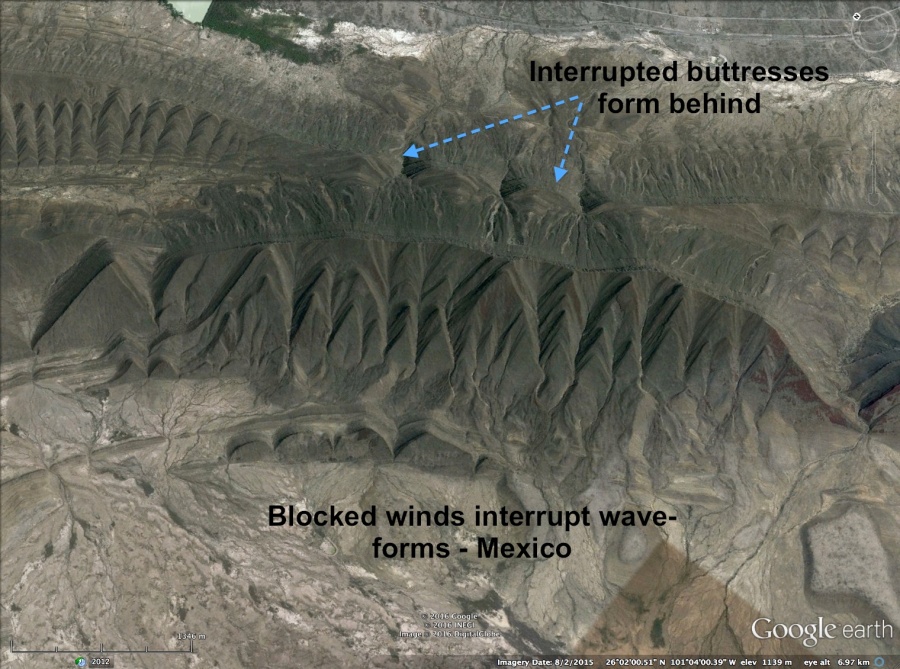 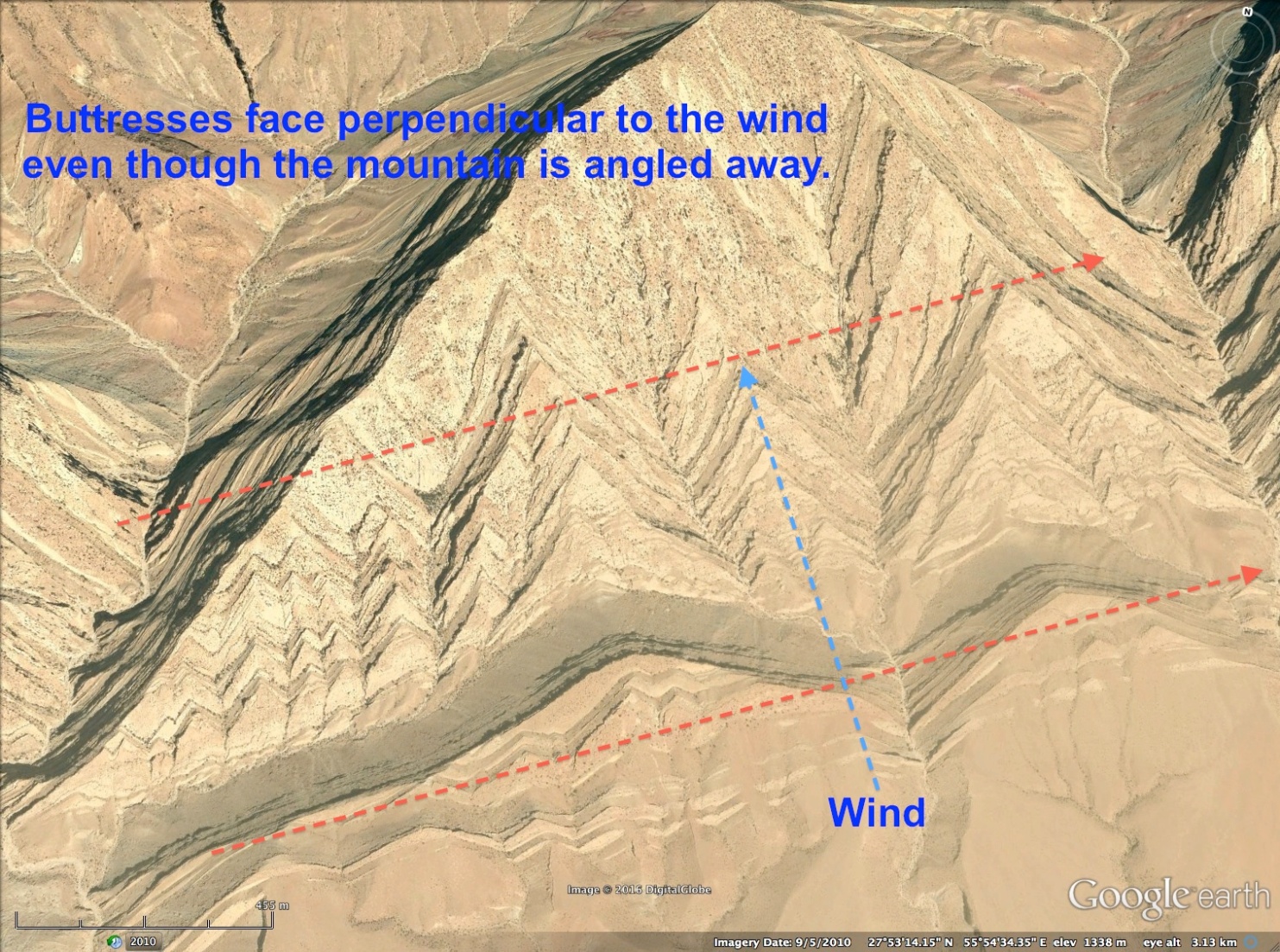 When a shock wave dissipates, the inflow of winds doesn’t necessarily stop, but they slow down and are no longer constrained to the path formed by the shock fronts. The final layers of material deposited often lose coherence and exhibit sub-sonic flow patterns.

The layered material on buttresses is deposited in a hot, molten state. Patterns of deposition display evidence of molten fluidity at the time they were made.

Supersonic shock waves display particular behaviors that have been studied by aerospace engineers since the beginning of the jet age. These characteristics must be understood to design airplanes, missiles and rockets. A great deal is known about their behavior.

The angle that the initial shock wave makes is directly related to the Mach speed of the wave. Thus,

it is called the Mach angle. Hence, the Mach angle holds information on the speed of the shock wave that made it. The triangular reflected wave form is an inevitability of supersonic flow. It forms when the initial shock wave hits a surface and reflects.

The reflected wave will have an equal, but opposite angle incident to the surface from the shock wave that made it, assuming the plane of the surface and trajectory of the wave front are parallel.

When the incident angle between the shock trajectory and the reflecting surface change, more reflected waves are created in predictable ways. Hence, the reflected angle holds information on the trajectory of the shock wave that made it.

The result is longitudinal and transverse waves super-positioning. Except inverted to the super-positioned wave shown below, with the fixed boundary above, fixed to the point in space the shock originated from, and wave motion amplified near the ground.

The static image in pink shows the standing waveform that results. Compression results in a higher frequency of small amplitude, short wavelengths, and expansion results in low frequency, high amplitude, long wavelengths. Triangular buttresses are the molded product of these shock waves, frozen in time as supersonic winds fused them in place on the mountain core. 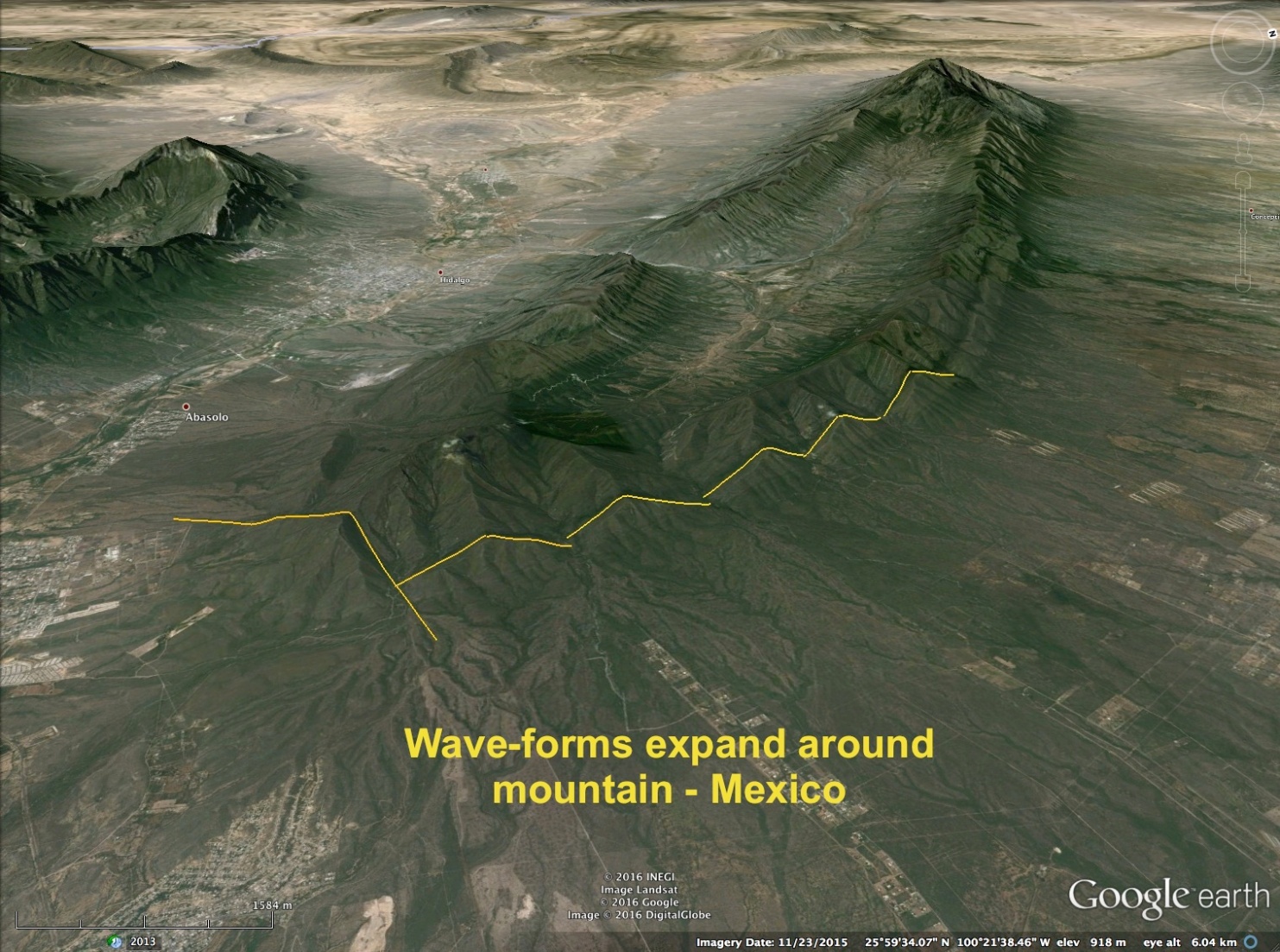 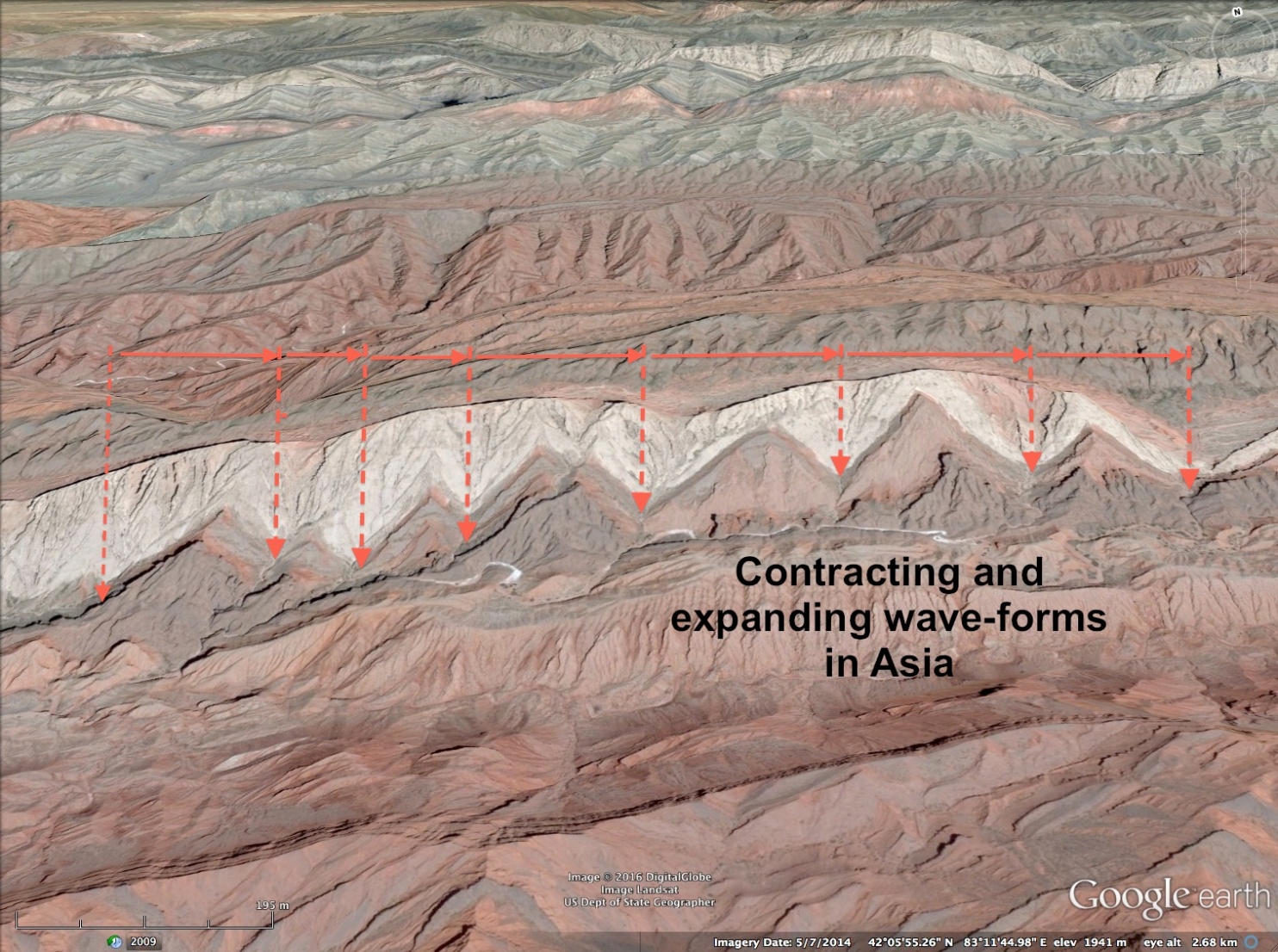 These wave-forms had to be created from above. A wave needs a surface — an interface — with a medium of higher density to reflect. Pure seismic waves shaking and rolling the ground from below are unbounded above. The atmosphere cannot reflect a seismic shock and create a reflected wave-form on a mountain side. The shock waves came from above.

Our ancestors had a name for them . . . Dragons.

Triangular buttresses are an imprint of the Dragon’s teeth, formed by supersonic winds and shock waves caused by an arcing current in the atmosphere. In Arc Blast — Part Two, more evidence of the hydrodynamic forces that shaped our planet will be examined.

Andrew Hall is an engineer and writer, who spent thirty years in the energy industry.  He was a speaker at the EU2016 conference and can be reached at hallad1257@gmail.com or https://andrewdhall.wordpress.com/