Home Picture of the Day Matter, Charge and Conjecture 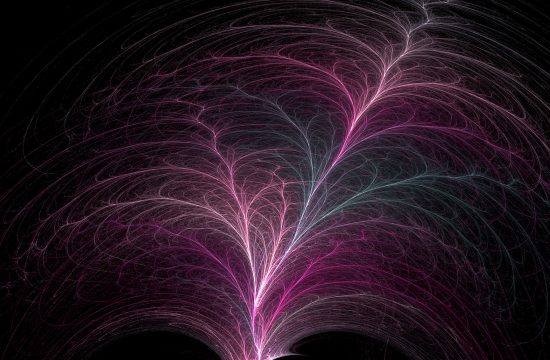 This misses the point. On the purely mathematical level, you can plug numbers into the equations to get any magnitude of force you want. The gravitational force between two 10 kg lead spheres placed 1 m apart is:

To equal that force with electricity, the spheres would have to be charged to:

This could be achieved with a current of 1 micro ampere in less than a millisecond. The technology of nylon rods rubbed over cat fur can transfer enough static charge to overcome the gravitational attraction of lead spheres.

“Can you get electricity to move planets?” That would require a lot of cats. The question is not relative strengths of forces but whether it’s possible to accumulate enough charge and move it with enough power to toss planets around like electrons.

Irving Langmuir could provide some enlightenment here. He’s dead, but his discoveries linger on. One discovery was that just a few ions in a substance can cause it to behave in unexpected ways. It forms cells and filaments. Charges separate into double layers that insulate cells from each other. The filaments twist around each other. They writhe and radiate. They seem almost alive–which is why Irving called the substance a plasma. An accumulation of charge inside one cell doesn’t interact with that in another cell until the double layers break down. Then they interact with tremendous power.

Another discovery (maybe this wasn’t Langmuir’s) was that plasmas exhibit the same behavior over large ranges of scale. From millimeter-sized sparks in a lab that last a millionth of a second to kilometer-long lightning bolts that last several seconds, the same properties can be observed. A long list of investigators has tried to draw attention to the similarities between certain astronomical phenomena and these lab and terrestrial plasmas. Just on a theoretical level, it seems rather simple to scale up a lightning bolt (at 10^9 kW) that can toss around our lead spheres to the size of an interplanetary bolt (at 10^21 kW) that can toss around planets (move the Earth 1/4 au in a year, say).

But does it actually happen? We can’t clip the leads from a planet-sized voltmeter across the solar system and measure the voltage drop. So we’re left with arguing about similarities. And we all know argument from analogy is fallacious. That doesn’t mean it’s necessarily wrong, only that it’s uncertain. The idea of gravity tossing planets around is familiar; the idea of plasma doing it isn’t. Much of our preference for one idea over another is simply this business of familiarity. Much of the work required to reach a new understanding of something is just this effort to make the unfamiliar familiar. By analogy with argument from analogy, argument from familiarity is also fallacious.

The Machian idea of inertial mass being the relationship of a particle of matter to all other particles within its sphere of communication implies that a newly created particle increases its mass as it ages. The Meta Model idea of gravitational mass being the shielding effect of other matter within the mean collisional distance of gravitons implies an upper limit of matter accumulations beyond which mass remains constant. We can’t hatch a Machian chicken and see if it grows without feeding it corn, nor can we stick a large toothpick into cakes of Meta matter to see if there’s uncooked mass in the middle.

What we’re stuck with is a conflict of paradigms. Each explains overlapping sets of data in different ways. We won’t know for sure if the universe is electric until we travel to a Seyfert galaxy and stick our finger in the socket. Nor will we know for sure if it’s gravitic until we drop Newton’s apple off the Leaning Tower of M87.

The question of “what’s the truth” is premature. The truth is this: No paradigm is believable. I.e., none are certain. Being stuck with a conflict of paradigms is really an opportunity. We can choose whichever conjecture strikes our fancy and follow its implications to see if we can invent something new to make our lives more comfortable and exciting. It’s not necessary to choose; it’s an opportunity,to choose. We’re better off having more conjectures to choose from than having less. It’s time to scrap the outworn philosophy of physics based on an illusory certainty. Instead, a more biological philosophy based on conjectures and refutations (Karl Popper’s phrase) or blind variations with selective retention (Donald Campbell’s phrase) would be more appropriate for small soft creatures living on a speck of terrestrial dirt and prancing around the cosmos.