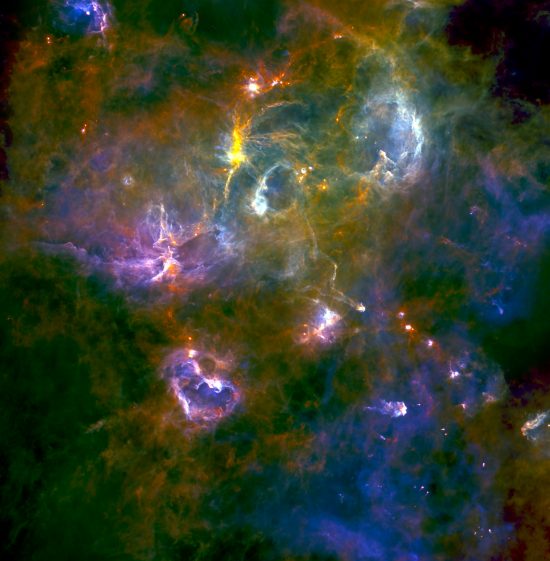 Astronomical theories would benefit from an understanding of plasma-state matter.

Winston Bostick is a pioneer of Electric Universe theories, although he did not identify with those ideas by name. He is particularly noted for plasmoid experiments that led to the construction of a dense-plasma focus device. One of his major contributions is a theory about galaxy formation from quasi-stellar (QUASAR) plasma structures.

In his view, the Universe is electrical, formed in a process of electric charge flow through the plasmas that make up its substance. Electromagnetic fields constrict various elements (mostly hydrogen and helium) into light-years-long strands, forming invisible, dark mode cosmic filaments. Known as Birkeland currents, they can only be seen in infrared images. Where those strands intersect, galactic discs form and develop characteristic spiral arms. Electric charge moves inward from the disc edges, where it then spirals upward and downward out of the spin axes because of associated magnetic fields, completing a circuit when it travels back down to the edges.

It is those Birkeland currents that provide pathways for electricity through space, just like power lines. Star formation in galactic nebulae takes place in the densest regions of electric flux.

According to a recent press release, DR21, named after Downes and Rinehart, astronomers who published their observations in the 1960s, is a “very massive filamentary structure” located in the Cygnus X nebula. Cygnus X is a good illustration of how large Birkeland currents can be, since images by the Herschel space telescope reveal them to be about 1 light year in diameter and up to 13 light years long.

Although the research team recognizes filaments in Cygnus X, their characterization ignores any electrical influence. Instead, “…supersonic flows compress the clouds…after which gravity collapses the densest material…”

Electricity never enters conventional discussions. “Cold gas” is reported and not plasma. Astrophysicists will occasionally discuss plasma, but they mean “neutral gas” and not ionized material. In the vast majority of cases, nebular clouds are identified with kinetic models of gas behavior and not plasma physics. Analysis of the Herschel images, for example, leads to a conclusion that ignores matter in the plasma state, preferring to view DR21’s magnetic fields as “…unimportant compared to turbulence and infall…kinematics from infall and gravitational effects become more important.”

Nebulae are more like fluorescent lamps that emit light through the excitation of specific gases. Electricity causes singular plasmas within the lamp housing to glow. According to astronomers, supernova shock waves initiate many frequencies of light because “cold gas” is compressed to high temperatures. Since light frequencies from planetary nebulae are more than 90% like those seen from ionized oxygen, they should be thought of as oxygen discharge tubes and not clouds of neutral gas.