Home Picture of the Day Truth or Fashion 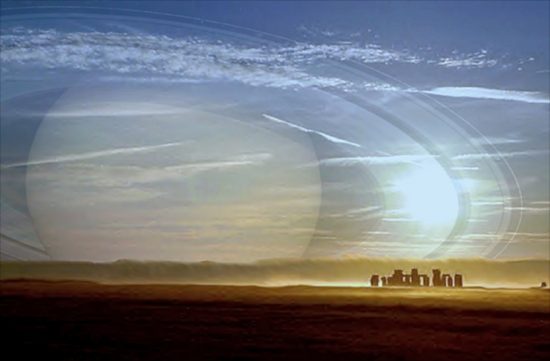 If currently fashionable theories are Ultimate Truth (or at least smart ideas) and myth was stupid superstition, where is the dividing line?

Was Ptolemy stupid and Newton smart? But General Relativity is not just an improved version of Newton’s theory, it’s different: Einstein’s stretchable space-time is not compatible with Newton’s rock-solid frame of reference. Newton was wrong.

Either he was stupid or his theory, after all, was adequate for his time and for the data set he was aware of. If the latter is true, then Ptolemy wasn’t stupid, either, and epicycles were appropriate for Ptolemy’s time and data set. Therefore, on the principle that intelligence and theory-making are cognitive structures inherent in the human species, the myth-makers weren’t stupid. They were trying to make sense of their data just as we are trying to make sense of ours.

Astronomy is an old endeavor. Despite changing theories and the expansion of awareness of the universe, the tradition of trying to explain that universe is continuous from present-day astronomers to early-historical astrologers to prehistorical myth-makers. Here’s the catch: The data has changed. The data set of the myth-makers was not just smaller than the data set of fashionable theory, it is unrecognizable in comparison. Nothing in today’s domain of planetary motions resembles the images recorded by the myth-makers. Their planets were up close, personal, and axially aligned. Their planets turned, like wheels, in the air. Their planets swelled and shrank. Their planets raged in the sky, hurled thunderbolts, and destroyed cities.

Our planets are tiny and sedate specks of light that we have to be trained to recognize.

Were our ancestors hallucinating? Were they insane? Or are we?

“Nothing in today’s domain” is not quite true. The newly-discovered planets circling other stars are mostly close-orbiting. If we had to live in those systems, where a “year” passes in just a few days, we might better appreciate our ancestors’ descriptions. And certain stellar and galactic jets are ejecting blobs of material along their axes, apparently highly charged, judging by the synchrotron radiation. There might be lightning bolts arcing among them. The domain of the myth-makers’ data has reappeared at larger scales, and the explanatory power of fashionable theories is inadequate to deal with it.

As long as we continue gathering data, the theories that are fashionable today will become tomorrow’s superstitions. Our descendants will wonder how we could be so stupid as to believe our few observations over a couple of centuries could provide a picture of the universe for all time. And our perverse refusal to pay attention to contrary data and to the testimony of our own ancestors must surely be a sign of insanity.

Stupid. Insane. It could be us.