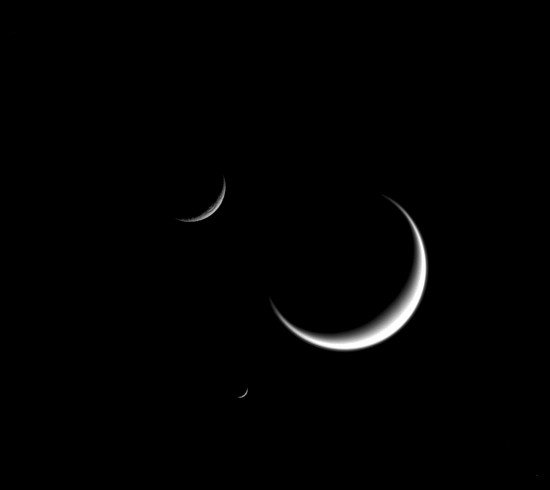 Titan is the second largest moon in the Solar System, with a mean diameter of 5150 kilometers. Only Ganymede is larger, at 5262 kilometers. The planet Mercury is smaller than Titan (4879 kilometers), as is the Moon (3474 kilometers). For comparison, Earth is 12742 kilometers, while Titan’s giant parent Saturn is 116,464 kilometers in diameter.

Saturn’s moons, although most likely members of the same family (some adoptions?), vary in size, chemical composition, temperature, and appearance. However, superficial appearances are often misleading when it comes to overall qualities or characteristics. Powerful electromagnetic connections with Saturn indicate that they share common traits.

A gravity map, created by monitoring changes in the Cassini orbiter’s speed as it flew by Titan between February 2006 and July 2008, reveals that its interior is a mixture of rock and ice with no layering. The orbital variations were measured by the Deep Space Network; determining Titan’s gravitational inertia as the moon “pushed and pulled” Cassini in its flight path. Analyzing those inconsistencies provided data for computer models of Titan’s core.

According to planetary scientists, variations in gravity suggest a variation in density, and because that variation is so subtle, they conclude that are no “mascons” of rock distributed through Titan’s body as there are inside Earth’s Moon. Instead, rock and ice are thought to be compacted into a relatively homogeneous interior structure.

Previous Picture of the Day articles point out that many of Titan’s anomalies can be explained if it is thought of as a youthful member of the Solar System. What if Titan is only a few thousand years old? If that is the case, then the conundrum posed by the presence of its dense atmosphere, lacking a mechanism for replenishment, can be attributed to that youth. If Titan is relatively young, its atmosphere is not in equilibrium—and it is losing methane at a measurable rate. That atmospheric loss requires methane production somewhere on or in the moon’s body if it is ancient.

Canyons on Titan are thought to be drainage channels from methane rains that must periodically fall to feed the “rivers,” although no precipitation was detected when Huygens landed on its surface. Alternatively, in an Electric Universe, the canyons are blast marks etched into Titan’s surface from tremendous lightning discharges. They point to the moon’s savage electrical birth. Their dendritic forms are called Lichtenberg figures, which look like some river systems on Earth, although a mathematical analysis demonstrates that channels formed by electricity are not the same as those formed by water.

Titan’s recent electrical birth, possibly resulting from a double layer overload within Saturn, also explains its homogeneous core. Electric Universe theory proposes that the progeny of stars or planets are not all born at the same time as the parent. They are born hierarchically at intervals and are electromagnetically ejected, typically from within the parent.

If Titan was ejected from Saturn in a paroxysm, then its atmosphere and surface features are the results of that catastrophic event. Its interior could be electrically charged, either from a continuous circuit connection with Saturn or because it retains a remanent discharging current flow. Possibly both. The small effects on Cassini could be electrical in nature.

Perhaps “slushy core” and “rocky interior” are outdated ideas. Could the deep places inside planets and moons possess double layers? If that is the case, then “gravitational effects” on Cassini might be from Titan exerting an electric force on the spacecraft.