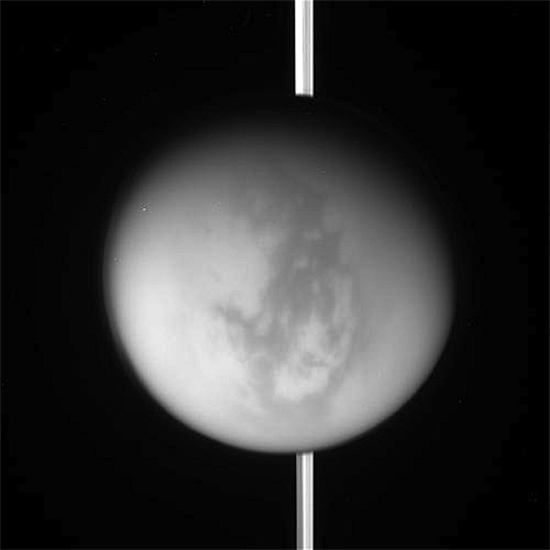 On October 15, 1997 NASA launched the Cassini-Huygens spacecraft atop a Titan IV-Centaur rocket. The six ton payload was the largest deep space mission ever deployed, requiring a seven year journey to Saturn. Gravitational assists from Venus, Earth, and Jupiter were needed because Cassini could not carry enough fuel for a straight route to Saturn.

Cassini-Huygens entered orbit around Saturn on June 30, 2004. Its name has been changed twice since then. The Cassini Equinox Mission was a two-year extension which began on July 1, 2008, following the completion of its Prime Mission that lasted from July 1, 2004 to June 30, 2008. Subsequently, its name was changed to the Cassini-Solstice Mission, named for the summer solstice on Saturn that will take place in May 2017.

On September 12, 2011 Cassini completed close flyby number 78 of Titan, coming within 5800 kilometers of the giant moon’s cloud tops. Titan has long been a mystery to planetary scientists. Perhaps the most perplexing find is that methane gas continuously escapes from Titan’s low-gravity environment. Sunlight is also dissociating methane molecules in its upper atmosphere, changing them back into their carbon and hydrogen constituents. Since consensus theories propose Titan’s age to be in the billions of years, how has its dense atmosphere survived for those countless eons?

NASA insists that Titan’s atmosphere is somehow constantly replenished, because so much of it is destroyed by sunlight and leaks away to space. Current theories about the formation of the Solar System imply that Titan is old, billions of years old. With so much loss at such a rapid rate, Titan’s atmosphere should have evaporated a long time ago. Astrophysicists can only imagine oceans of liquid methane beneath the cloud cover as a source of replenishment.

When the Huygens lander touched down on a flat, rocky plain, the idea that Titan is “wet” with hydrocarbons suffered a serious blow. No methane was falling from the sky and no methane puddles were visible. Rather, in keeping with images sent from orbit, a vast dry area covered with “sand dunes” was seen.

Based on years of analysis, Electric Universe advocates think that the Solar System was once the scene of devastating encounters between charged bodies in the recent past. Giant clouds of plasma rife with electric arc discharges disrupted the orbital arrangement of planets and moons, as well as adding new objects. Large bodies like Titan all the way down to the small particles that make up Saturn’s rings might have recently come into existence.

If Titan is a new addition to Saturn’s family of 60 moons and counting, then its dense atmosphere does not presuppose replenishment, but juvenescence. Titan is not losing an ancient atmosphere, its atmosphere is new.

The Electric Universe hypothesis paints a more complete picture when data from space probes and telescopes are inserted. It is not considered a viable model to mainstream researchers because of the time element involved. Its opponents presume that the Solar System is the same as it was since its formation billions of years ago. A 10,000 year time span for planets and moons to be altered or begotten is blasphemous to the consensus opinion.

However, when the time for change in a paradigm arrives, change is inevitable. The growing interest and adherence to the Electric Universe paradigm means that changes to human thought are coming soon.