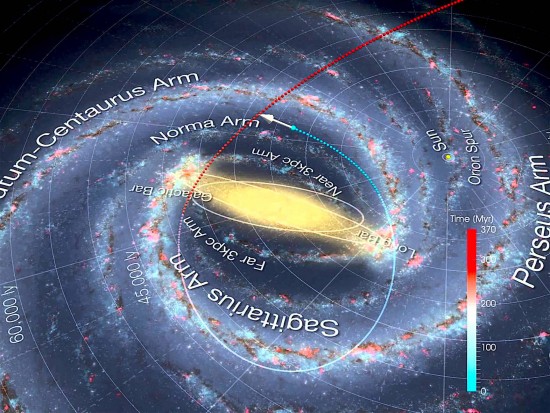 Stars in galaxies are affected by electromagnetic fields.

According to a recent press release, the Milky Way “…hosts a propeller stirring up chaos in its wake.” By examining the positions of dwarf galaxies and globular clusters around our galaxy, astronomers found that they are not randomly distributed, but follow what is called “the Plane of Satellites”. There is also a “…fraying ribbon of stars called the Ophiuchus stream” that is theorized to be the remains of a globular cluster “torn apart” by the Milky Way’s central bar.

Modern theories predict that hundreds of dwarf galaxies should surround the Milky Way in a somewhat random distribution, since galaxies are thought to have developed by cannibalizing other galaxies, as well as through multiple collisions with even smaller galaxies. Most of the remnants from the collisions were supposedly absorbed into the Milky Way, but those that remained became globular clusters and dwarf galaxies. Observations of the Plane of Satellites calls the theory into question, however.

Electric Universe theory postulates that currents of electric charge flow through a galaxy along its spiral arms. A bridge across the galactic disk divides into upward and downward currents that flow back out of the poles and into the arms, again. This circuit is driven by Birkeland currents that connect the galaxy with the rest of the Universe. Presumably, billion-light-year long magnetically confined electric filaments transmit power from one end of space to the other.

Birkeland currents move through the center of the Milky Way, where they may also generate a cylindrical particle beam effect at the edge of the disk, energizing a ring of stars. The Sloan Digital Sky Survey has uncovered such a ring surrounding the galaxy at a reported distance of 120,000 light years.

Since dwarf galaxies and globular clusters revolve in the galactic plane along with the ring, logic suggests that one force is acting on both. Electromagnetism causes them all to be aligned at right angles to the axial intergalactic magnetic field, not gravity.

Conventional viewpoints acknowledge that galaxies form clusters, but it was not until recently that data analysis pointed to those clusters grouping together along vast filaments of “hot gas” that are more than a million degrees Celsius. The filaments are actually Birkeland currents, perhaps thousands of light years thick and millions of light years long, out of which groups of galaxies are “pinched.” When we acknowledge that redshift is more a measure of youth than the distance of quasars, there is a possibility that the visible Universe is formed from braided filaments passing through the Virgo supercluster to the Fornax supercluster across millions of light years.