Home Picture of the Day Wishing for Theories 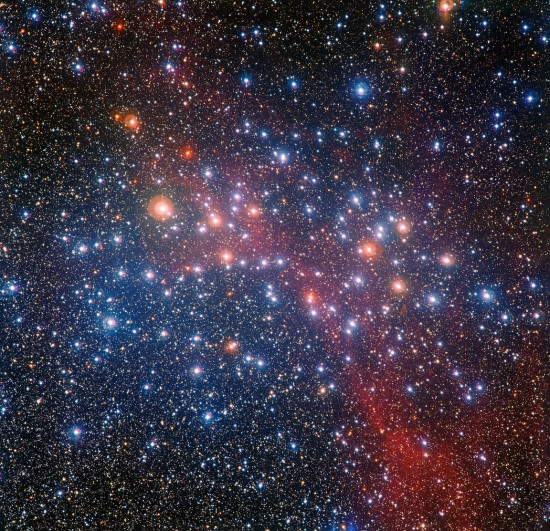 Original caption: The MPG/ESO 2.2-metre telescope at ESO’s La Silla Observatory in Chile captured this richly colourful view of the bright star cluster NGC 3532. Some of the stars still shine with a hot bluish colour, but many of the more massive ones have become red giants and glow with a rich orange hue. Credit: ESO/G. Beccari

The Wishing Well Cluster in the southern sky is twice the size of the full Moon. The conjectures about how it works are as varied as the colors of its stars.

The consensus conjecture of stellar evolution has been developed in detail over several generations. A cloud of gas collapses under its self-gravity to form relatively isolated stars that are powered by internal nuclear furnaces. Those furnaces cause a predictable course of evolution of the theoretical stars’ sizes and luminosities. The sizes and luminosities of the observed stars are then fitted to the conjectured evolutionary sequence. Massive blue stars evolve into red giant stars, which explode. The more massive they are the faster they evolve. Small-mass stars may get stuck at yellow for a long time. Of course, humanity has not lived long enough to witness any particular star evolving.

And of course there are questions. If a cloud has significant net spin, the centrifugal forces generated as it “draws its arms in” (like a spinning ice skater) will stop the collapse. Also, the discovery of magnetism in such clouds—assumed to be “frozen in”—requires the magnetism to act like a spring, preventing collapse. As usual in such cases, when efforts to resolve the puzzle failed, the questions were shelved and then forgotten.

One minority conjecture is little more than an insight and a promise (as all conjectures start out). The insight is that the universe is composed of plasma, not gas. The magnetism is generated by electric currents, revealed in the many filamentary structures that lace through the universe. The promise is that the behavior of plasma discharges in labs will provide more coherent and complete explanations of the behavior of stars.

Lab plasma is alive with electricity, but electric fields are almost impossible to detect in space—especially when astronomers refuse to look for them. So argument proceeds by analogy. Electric discharges in plasma are unstable. They create cells bounded by double layers (DLs). The DLs contain most of the voltage differences between cells, often leaving quiescent plasma within the cells subject primarily to the forces of gravity and gas. The DLs can accelerate particles to high velocities, all the way to cosmic ray energies. And they can explode. They enclose stars and provide the power for their light, rather than internal nuclear furnaces. The pinch effect in currents and in their instabilities will pull in surrounding matter and compress it to high densities: There is no “gravitational collapse.”

Blue stars are under high electrical stress: think of the blue-white light of an arc welder. With excessive stress, the star may fission into two or more pieces to increase its surface area and thereby reduce the stress. At the extreme, the stress “short circuits” the DLs around the stars and they explode as novas. Hence the Wishing Well Cluster is rich in binaries. Red stars are under low electrical stress: think of a light bulb on a dimmer switch that’s turned down.

As fluctuations occur in the (unstable) current that powers them, stars may “jump” from one color to another: There is no “evolution.” Yellow stars are perhaps as close to equilibrium as a complex, unstable system can get.

Here’s hoping that our yellow Sun masquerades as a stable conventional “collapsed cloud” for a long time.