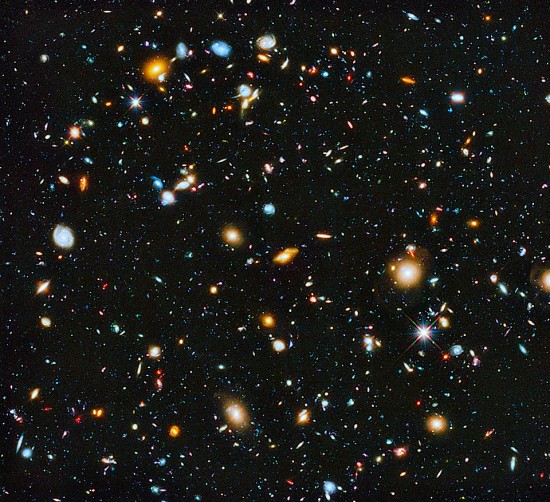 Is the Hubble Space Telescope seeing billions of years into the past?

How far away are things? In an Electric Universe, the answer is not what is commonly presented in science journals. Astronomers are fitted with spectacles that can see distances only in terms of redshift when dealing with celestial bodies father away than a few light-years.

The Hipparcos satellite was launched in 1989 by the European Space Agency on a mission to map the distances to stars using Earth’s orbit around the Sun as a baseline. By taking measurements of stellar motion against the background of more distant stars—a technique known as “parallax”—Hipparcos determined the angular differences from one side of Earth’s orbit and then compared that angle from the other side, a baseline distance of over 308 million kilometers. Although the baseline was large (Hipparcos ceased operations in 1994) the angles are small. The closest star, Proxima Centauri, has a parallax of only .772 arc seconds. Since each degree of angle consists of 60 arc minutes, and each arc minute consists of 60 arc seconds, one arc second is 1/3600 of a degree. Hipparcos was able to determine angular degrees to the stars within 200 light-years with .001 arc second accuracy.

Beyond a few hundred light-years, astronomers depend on redshift as their metric. By adapting Austrian physicist Christian Doppler’s observations to the spectra of various galaxies, astronomers believe that the change in location of particular elemental signatures called Fraunhofer lines (for the German physicist Joseph von Fraunhofer) indicate that the light is shifted toward the red end of the spectrum by an apparent recessional velocity.

Fraunhofer lines are supposed to occur at specific frequencies identified in the spectrum by the kind of element that is absorbing the light. As the theory states, if they are in a different location, then they have been Doppler-shifted because of the element’s acceleration, either towards the observer (blueshifted) or away (redshifted). This idea is the basis on which galactic-scale distance calculations are founded.

Since the theoretical distances are correlated with a time-scale, a galaxy that is 10 billion light-years away is also thought to be as it was 10 billion years ago. Astronomers believe that they are seeing ancient light that has been traveling through space for 10 billion years. In the image at the top of the page, data from over ten years of Hubble Space Telescope observations has been condensed into one overall picture of deep space: supposedly out to billions of light-years.

The late astronomer Halton Arp, a good friend to Electric Universe advocates, called attention to the fact that he had observed a lower redshift galaxy physically connected to a higher redshift quasar by a “luminous filament”. If those objects are physically connected, they must reside locally with one another at almost identical distances from Earth. Arp proposed that the discrepancy in their redshifts had to be from some other factor not related to their distances—there must be something in their makeup that led to the deviation.

Arp’s “Catalog of Discrepant Redshift Associations” describes many anomalous physical links among objects with radically different redshifts. Some of the observations show quasar pairs being ejected in opposite directions from active galaxies. This led to his “ejection model” of galaxy formation. In brief, high redshift quasars around a galaxy are the “daughters” of the mature galaxy. Their various redshifts do not indicate distance, but age from the time of ejection.

Arp speculated that the redshift measurement of quasars is not based on a velocity value, but depends on “intrinsic redshift.” Intrinsic redshift is a property of matter, like mass or charge, and can change over time. According to his theory, when quasars (objects with the largest measured redshifts) are ejected from a parent galaxy they possess a high intrinsic redshift, z = 3 or greater.

As quasars move away from their origin within a parent galaxy, their redshifts begin to decrease until they reach somewhere near z = 0.3. At that point, the quasar resembles a galaxy. The inertial moment of ejection is eventually overcome and the mass of the quasar increases while the speed of ejection decreases, until it may become a companion galaxy. It is in that way that galaxies form and age, evolving from highly redshifted quasars, to small irregular galaxies, and then into larger barred spirals.

Redshift as a measurement of distance is a theory that should be discarded.