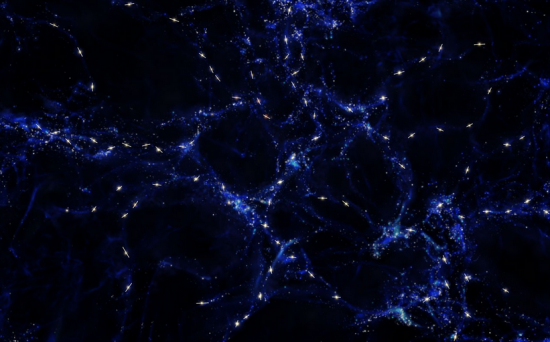 Original caption: This artist’s impression shows schematically the mysterious alignments between the spin axes of quasars and the large-scale structures that they inhabit that observations with ESO’s Very Large Telescope have revealed. These alignments are over billions of light-years and are the largest known in the Universe. The large-scale structure is shown in blue and quasars are marked in white with the rotation axes of their black holes indicated with a line. This picture is for illustration only and does not depict the real distribution of galaxies and quasars.
Credit: ESO/M. Kornmesser

The astronomers found [pdf] (“calculated” is more accurate) that “quasar spin axes are likely parallel to their host large-scale structures.” They selected 93 quasars with redshifts around z=1.3. According to the conventional assumption that redshift indicates distance, the quasars would be almost 10 billion light-years away. Of the 93, they found 19 whose light was sufficiently polarized to enable them to calculate the likely orientations of the spin axes. Those orientations aligned with the quasars’ apparent locations in a string—the LSS—across the sky. They, and their LSS, would have formed shortly after the Big Bang banged.

The angular distribution of the quasars would require the string to stretch across several billion light-years if they were as far away as the redshift-distance assumption indicates. The paper concludes: “The existence of correlations in quasar axes over such extreme scales would constitute a serious anomaly for the cosmological principle.”

Halton Arp has published three books and many papers reporting large numbers of observations that falsify the redshift-distance assumption. Instead of being far away, large, and luminous, quasars are likely nearby, small, and faint. If the string of 19 in the study were in the Local Group of galaxies, roughly between the Milky Way and the Andromeda galaxy, it would extend less than a million light-years. That’s a typical distance to which ejections of quasars (along with so-called galaxy clusters and hydrogen clouds) extend. The quasars could be a family group of ejections from one galaxy. Their axes would be aligned with the parent galaxy’s axis, as well as with the direction in which they were ejected.

The EU proposes an electrical mechanism for ejection and confinement of ejecta in the axial Birkeland currents that power both parent galaxy and quasars. The LSS of the Big Bang is constructed with calculations of distance from redshift, and the weak gravitational force is presumed to be the only originating agent. It’s doubtful that gravity could form billion-light-year-long strings of matter in the time required. The EU has no such constraint. The LSS doesn’t exist in an Electric Universe, but the initialism could be adapted to mean Local Scale Structure.