Home Picture of the Day The Daughter of Lycaon

The Daughter of Lycaon 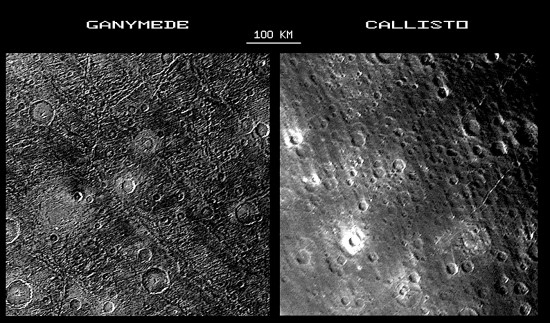 Comparing Ganymede and Callisto. The straight lines versus the swirls on Ganymede indicate that Ganymede has an intrinsic magnetic field, while Callisto does not. Credit: NASA/JPL

Callisto resembles other electrically shocked bodies in the Solar System.

The Galileo spacecraft was launched October 18, 1989 after a delay lasting several years, while NASA underwent a management and procedures overhaul following the Challenger space shuttle explosion. On September 21, 2003, Galileo’s mission ended when it was deliberately burned-up in Jupiter’s atmosphere.

The four Galilean moons—the ones originally discovered by Galileo Galilei — are some of the largest moons in the Solar System. As the second largest member of the Jovian system, Callisto bears the marks of many electrical jolts. Of course, the large number of craters on this moon could be considered anomalous, except that they are matched in quantity by Mercury, as well as Earth’s Moon. Their shapes and arrangement are strange, as well as the fact that there are so few small ones.

The gigantic ring that dominates the trailing hemisphere of Callisto marks out a circle some 1056 kilometers in diameter. Known as the Asgard Multi-Ring Structure, it consists of concentric fractures that outline a bright central feature. A large domed crater named Doh in the center of the bright plain is very unusual. Rather than having a depression in the center of the crater, 50 kilometer-wide Doh contains a huge mound-shape cut through with deep channels. More then anything else this feature is reminiscent of the large fulgamites, similar to Olympus Mons, that have been discussed in past Picture of the Day articles.

The Valhalla Basin is another point to consider in the electric theory of Callisto’s topography, as well as the enormous crater in the southern hemisphere. At 200 kilometers in diameter, its rays extend outward hundreds of kilometers across the surface very much like the lunar crater, Tycho. As has been noted several times in past Pictures of the Day, the morphology of such rays can be traced to electrical effects.

There is another crater that should also be listed in this compilation of anomalies on Callisto and that is Har. Har crater is a 50 kilometer-wide, double ring, with another 20 kilometer-wide crater centered on its rim. This formation has been tentatively identified with others as the scar of an electric arc discharge, because it has a central mound with parallel striations running through it. The multiple smaller craters are often tear-drop shaped and occur in long chains, another characteristic of cathode discharges to an oppositely charged surface.

Callisto’s surface is more knobby than the other moons in the solar system. There are hundreds of square kilometers where there are few craters. Instead, vast fields of rounded spires stick out of the surface. In other parts of the moon the spires are tilted and angular, as if they are the tops of material that has been fused into the faceted shapes. If replicated structures with cyclical patterns of shape are found on planets with virtually no atmosphere that are dry and frozen, and they are also found on our habitable planet with plenty of water and oxygen, what creates them in environments that are close to absolute zero with no atmosphere whatsoever? The answer seems to be electric discharge machining.