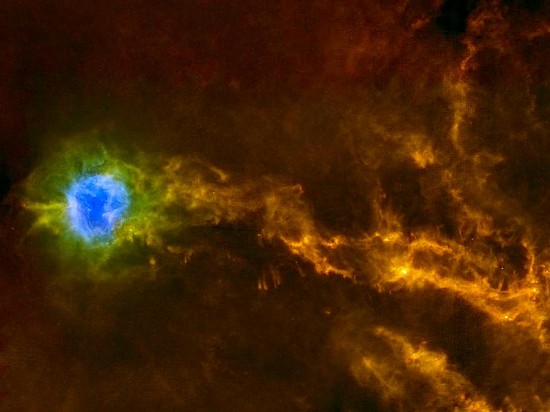 Many fast, high energy phenomena could be due to something astronomers do not expect.

Some things are familiar, even though they are not easily explained. The aurorae at each of Earth’s poles are familiar to most people, although the way they form is not completely understood. Similarly, lightning bolts are familiar to everyone, but how they are generated by clouds and rain is mysterious to meteorologists.

The aurorae are electrical events caused by charged particles from the Sun, otherwise known as the solar wind, interacting with the atmospheric elements on Earth. As the solar wind enters Earth’s electrical environment, it is channeled down into electromagnetic cusps that act as field guides, aligning it with magnetospheric openings at the north and south poles. As the protons and electrons that make up the solar wind travel deeper into the atmosphere, they ionize oxygen, nitrogen and other molecules, energizing them into a luminous state. A neon lamp is a good illustration of what happens: electricity creates plasma that glows. The colors in the aurorae depend on which element is glowing.

Lighting bolts are most likely caused by a capacitor effect between Earth’s ionosphere, the Sun and the planet. As previously written, electricity in the clouds and the ground can defeat the atmosphere’s dielectric insulation, so they generate “leader strokes.” When the two leaders meet, a circuit between the clouds and the ground (or between one cloud and another) is completed and a burst of electric current flashes along the conductive pathway.

Lightning’s arc mode effect is one of many ways that electricity behaves. There are also glow discharges, like the aurorae, observed above the clouds. These extremely large events are called “red sprites” and “blue jets.” Electricity is also evident in “dark” discharges. These could be powerful electric currents but they are unseen and difficult to detect. An ionic wind can reveal the presence of a dark discharge, such as that from an electric air purifier.

In thunderstorms, dark discharges drag surrounding neutral air molecules along with charged particles. The strong winds into and out of such storms appear as updrafts and downdrafts. In an Electric Universe, thunderstorms are not produced through hot air convection. Instead, thunderstorms could be a secondary phenomenon driven by an invisible dielectric breakdown of Earth’s atmospheric insulator.

Astronomers working with the Parkes radio telescope in Australia found “energetic transient flashes” that they think came from outside of the Milky Way galaxy. If that is the case, then “energetic” is a small word for such occurrences. As described in their press release, those radio bursts were so powerful that they exceeded the Sun’s total output for 300,000 years in only a few milliseconds.

Since most astronomers are not knowledgable in other fields, especially electrical engineering, they are left with ideas like colliding magnetars, evaporating black holes, supernovae gamma ray bursts, or “an entirely new type of high-energy astrophysical event” to explain them.

It is possible that the radio signals that the Parkes team detected were created by supernovae. However, what “supernova” means to mainstream astronomers compared to what it means to Electric Universe advocates is quite different.

As previous Pictures of the Day argue, stars do not age and die in the way that conventional understanding proposes. Stars are not globes of hot gas under pressure, they are composed of plasma. Plasma is ionized and is an electrically charged substance. Since it is ionized, it does not behave like a pressurized gas, so shock waves and gravitational instabilities are insufficient when it comes to explaining the birth and death of stars.

A supernova is an exploding star, but not in the conventional sense. Rather, it constitutes the explosion of a double layer in plasma. The power comes from external electric charge flowing through vast circuits in space. Supernovae are the result of a stellar “open circuit” in the galactic power supply. In an exploding double layer, the energy of an entire interstellar circuit might flash into the explosion, increasing its expansion far from the surface of the star. Radiation from the double layer then shines in ultraviolet, X-rays, or bursts of gamma rays and radio waves. Electromagnetic jets from stars and galaxies are probably indicative of lightning discharges, as well.

It is more likely that the Parkes researchers saw a cosmic lightning bolt of unknown but extreme dimensions.