Home Picture of the Day A Ring, A Ring O’Roses

A Ring, A Ring O’Roses 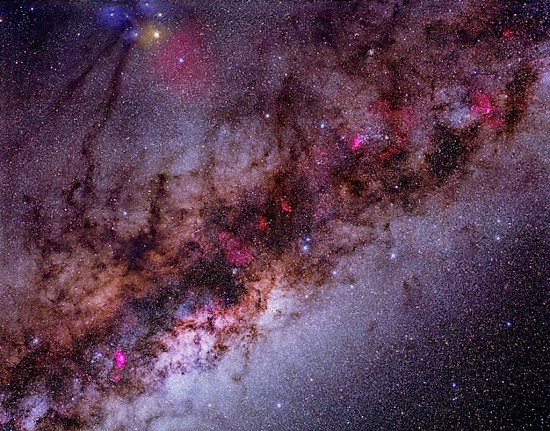 A false-color image of the galactic center from the Herschel Space Observatory. Credit: NASA/ESA

A ring of gas is said to be orbiting the center of our galaxy.

Previous Pictures of the Day, discuss the active nucleus in galaxy Centaurus A, The conclusion was that active galaxies display characteristic axial jets and transverse, donut-shaped plasma discharges. According to information from the now defunct Herschel Space Observatory, our own Milky Way galaxy is demonstrating similar active center plasma behavior.

Galaxies are created within helical electric currents that flow in a great circuit through intergalactic space. The Bennett pinch effect squeezes plasma inside these cosmic “transmission lines,” confining vast clouds of ionized gas within electromagnetic fields, igniting stars and forming toroidal currents around the galactic equators. It is electrical current density that causes the plasma in stars to glow.

However, as a recent paper speculates, the ring orbiting the center of the Milky Way might exist because of a standing wave in the central bulge caused by galactic spin and the inertia of gas moving across its central bar. Combining those forces is thought to create a gravitationally unstable region that initiates the ring’s unusual oscillation.

The spinning cloud is supposed to overcome its internal gravitational attraction with centrifugal force, flinging out material like drops of paint. Although, how a randomly moving cloud of particles acquires a net spin is unexplained by consensus astronomers.

Hannes Alfvén’s “electric galaxy” hypothesis, on the other hand, states that galaxies are more like a device invented by Michael Faraday, the homopolar motor/generator. Faraday’s device evolved into one that is driven by magnetic fields induced in a circular, conductive metal plate. The plate rotates between the poles of an electromagnet, causing it to spin at a rate proportional to the input current. Since galaxies are part of a filamentary circuit of electricity that flows through the cosmos, they most likely spin because of electricity flowing through them like it does through Faraday’s motor.

Galaxies exist within an inconceivably large filamentary circuit of electricity. There is no way to know where this charge flow rises, or to what electrode it is attracted, but we see the effects of its electromagnetic fields in the magnetism and synchrotron radiation that permeate space.

Electricity organizes itself within fields of plasma that are sometimes larger than galaxy clusters. The plasma is composed of neutral atoms, but a small percentage of charged particles is also present. Those particles, and the charge-neutral ones they sweep along with them, are driven by the larger electromagnetic field to form “pinches” of matter.

Rather than a gravitational crisscross from cold gas, it is electromagnetic plasma that is spinning the Milky Way’s central torus.