Home Picture of the Day Chain of Fire 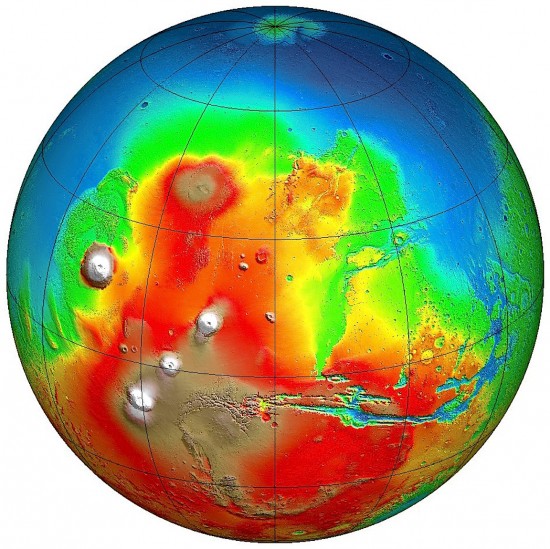 Since Mars has no crustal plates, why are volcanoes found in chains?

According to conventional theories, volcanoes on Earth form when the plates that make up the Earth’s crust move over upwelling magma plumes. Magma naturally seeks out the weakest areas in the confining strata, allowing it to erupt onto the surface or under the ocean. Islands might appear in chains if enough lava deposits build up during periods of slower crustal movement.

Planetary scientists think that the formations they call “volcanoes” located in the Tharsis Montes region on Mars might not be extinct after all. The four gigantic craters are near one another and three of them run in a chain, so researchers believe that they were formed in the same way that they believe volcanoes on Earth are created.

On Mars there is no evidence that the crust moves. No theoretical plate boundaries exist, so there should be no line of volcanoes similar to the Hawaiian Islands, for instance. According to various papers published in journals such as Geophysical Research, that might not be how it happens on Mars. Olympus Mons, Ascraeus Mons, Pavonis Mons and Arsia Mons could have a moving column of magma beneath them. In other words, the plume of magma is what moves and not the crust.

In previous Picture of the Day articles about Martian volcanoes, Olympus Mons in particular, it was suggested that the shape of the escarpments and the surrounding topography indicates that they could have been made by enormous plasma discharges that impacted the planet. The force of the electric current raised the giant mounds and carved out their distinctive calderas.

As Electric Universe advocate Wal Thornhill points out: “Olympus Mons, 25 kilometres high, is NOT the highest volcano in the Solar System. It is a giant raised electrical blister with characteristic superimposed circular craters at the summit. It is the kind of blister seen on metal lightning arrestor caps after a strike.”

If electric currents of such magnitude influenced the geography of Mars, could they have done something similar on Earth? The theory of plate tectonics and its relationship to volcanism on our planet should be reconsidered. Rather than inventing a new theory because new observations do not support the old one, electricity and its protean nature should be added to the mix.