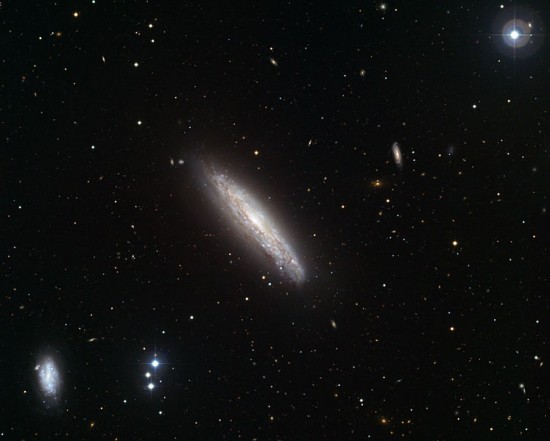 NGC 4666 is one of the younger additions to the Virgo cluster of galaxies. It has also apparently given birth to another generation.

The galaxy lies eight degrees south of M49, the great-grandmother of the Virgo cluster. Whether NGC 4666 is the daughter of M49 or of one of her many children has yet to be determined. The galaxy is directly in the line of ejection of many objects that M49 has thrown off: M87 at one end and 3C273 at the other. These objects are connected by electrical circuits that can be traced from their x-ray and radio emissions. In turn, lines of ejection from M87 and 3C273 extend the family tree of M49 to the third generation, and pairs of quasars on the opposite ends of these grandchildren’s spin axes mark the births of great-grandchildren. (Read Halton Arp’s discussion of ejection in his book Seeing Red, available from Mikamar Publishing.)

Recurrent ejections of the plasma-focus plasmoid at the galaxy’s core have likely produced the next-generation companion galaxies at lower left (NGC 4668) and upper right: the galaxies lie along the spin axis of NGC 4666, they are smaller, and they are more redshifted. There are likely a number of quasars along this line also, but they have yet to be identified.

The Birkeland currents driving the galaxy show up in x-ray. The x-ray plumes (jets) extending from the poles indicate the narrowest “waist” of the hourglass-shaped pinch in the intergalactic Birkeland currents. The electrical configuration will be similar to that of planetary nebulae. The polar plume currents and the induced equatorial ring current are, of course, traced in the magnetic field map of the galaxy.