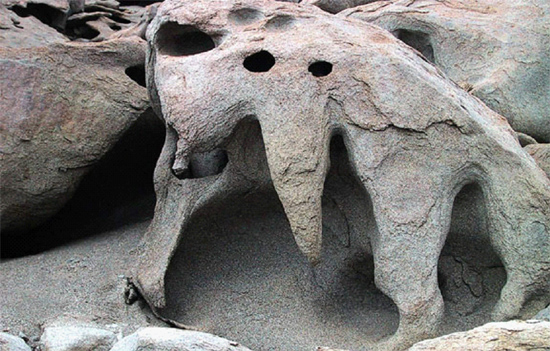 Not all the Southern Continent is frozen. It has areas like other deserts in the world: barren, dry and lifeless.

Antarctica is known for being an ice-bound continent covered with glaciers and sheets of ice four kilometers deep. Its only long-term inhabitants are seabirds, seals, whales and a particular brand of research scientist with a penchant for new discoveries in extreme environments. However, an analysis of satellite imagery around the South Pole revealed that there are some areas in the Wright Valley, for example, that are entirely free of ice and have rivers flowing through them.

A previous Picture of the Day article about the giant Wilkes Land crater suggested that the continent has been catastrophically altered by electrical events and not by the slow action of glaciers and Ice Age effects alone. The crater could have been created in similar fashion to Manicouagan or Popigai before Antarctica froze at the beginning of the last ice age.

Some observations seem to show that the glacial debris is younger in appearance than the time estimates demand, and some of the charred forests that lie buried under the ice burned up so quickly that they are carbonized in place. They look as if a lightning bolt or some other electric discharge hit them suddenly. The electrical forces that were unleashed may have actually caused the continent to freeze, the forests to burn and the animals to die and become fossilized in a short period of time.

Antarctica not only possesses one of the largest craters on Earth, it also has some of the largest stone monoliths found on any continent. Murray Monolith is much like the dolerite structure in Tasmania called Cradle Mountain. Another is horseshoe-shaped like the Massif des Bauges in France. Stone blocks such as Mount Conner in Australia and Table Mountain just outside of Cape Town, South Africa resemble those in Antarctica, as well.

One interesting aspect to the Wright Valley is that dolerites scattered throughout the area look different than simple weathering can explain. Dolerite is basalt lava that is hard enough to resist the erosion, which is how standard geological theories explain the stone monoliths. Underlying lava rocks are harder than the surrounding sedimentary deposits so plutons, or lava plugs, are left behind after wind and rain dissolves the softer material.

Because dolerite tends to erode by freeze-thaw fracturing, pinnacles caused by weathering in the vertical cracks are often found on top of basalt and granite plutons. The formations on top of the hilltops in Wright Valley defy that convention as the image at the top of the page demonstrates. They have a half-melted and drilled appearance, with sharp-edged holes and fluted wings of stone flowing down that are distinctive to Antarctica but have characteristics similar to those on Ben Bulben in Ireland or on the summit of Angel Falls in Venezuela.

In every environment where isolated mountains of rock are located, anomalous “erosion” patterns are also found. The relationship between the two is unlikely to be random since it occurs in disparate locales and temperature ranges. Rather than being anomalies, these patterns should be considered signs that a single event spawned significant changes at a variety of scales in rock strata all over the world.