Common Misconception 5 — What About Gravity?

Misconception:
The EU concept seeks to replace gravity with electromagnetism.

The Electric Universe paradigm fully accepts the existence and importance of gravitation to the practice of physical science and cosmological modelling. But it adds the crucial caveat that gravitation does not tell the whole story.

What if the Sun is not powered from within, but from outside of itself by a combination of electrical discharge from twisting Birkeland currents, energy from highly accelerated He++ ions, and nuclear CNO fusion initiated at the surface by solar flares? What if supernovae are not explosions at all but in fact stars shattered by cosmic lightning strikes? What if the gargantuan mass of galaxies is not held together by gravitation alone, but also by electromagnetism?
~Hilton Ratcliffe, The Virtue of Heresy – Confessions of a Dissident Astronomer

The Electric Universe concept emerged from the principles of empirical physical science as expressed by such pioneers as Galileo, Kepler and Newton. Isaac Newton extended the principles of Johannes Kepler to laws of motion and gravitation and laid the groundwork for an understanding of the mechanics of celestial motion. That understanding has given mankind the means to plan and execute feats of space travel with unerring accuracy. Standard gravitational theory provides the basis for the most precise and testable predictions in the field of space science.

However, there is an important corollary to the gravitational theorem: It does not single-handedly provide all the answers required by physical science particularly in deep space. For example, gravitational theory struggles to explain many anomalies in observation such as the deviating flight path of the Voyager mission and the unexplained rotation of galaxy disks.

Today’s most vexing scientific anomalies point to an unexpected—at times dominating—role of the electric force. In remote space we see direct evidence of electric currents organizing cosmic structure and provoking events at unfathomable energies. Closer to home, new data from space makes clear that our Sun interacts electrically with its cosmic environment, and electric currents connect our own earth directly to the Sun. Indeed the entire heliosphere reveals an electrified plasma environment through which planets, moons, comets, and asteroids move. 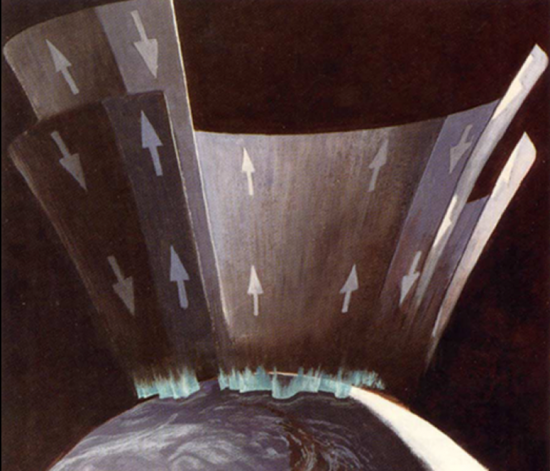 The scientific understanding of the Earth and Sun advanced greatly with the discovery of charged particles from the Sun entering the upper atmosphere of the Earth to power the auroras. At the beginning of the space age, astrophysicists considered the idea of an Earth-Sun electric circuit to be an impossibility.

Only a few years ago, standard textbooks on astronomy and astrophysics gave no credence to this idea. The words “electricity,” “electric fields,” and “electric currents” will not be found in textbooks just a decade or two old. More recently such words began to enter the astronomers’ lexicon, largely through the back door, with the discovery of pervasive magnetic fields in space. Magnetic fields in the severe vacuum of space are the signature of hidden electric currents, though this fact often remains obscure. The future holds promise of a much more balanced view of celestial mechanics that takes into account the electricity of space.