Home Picture of the Day The Garden Sprinkler Nebula 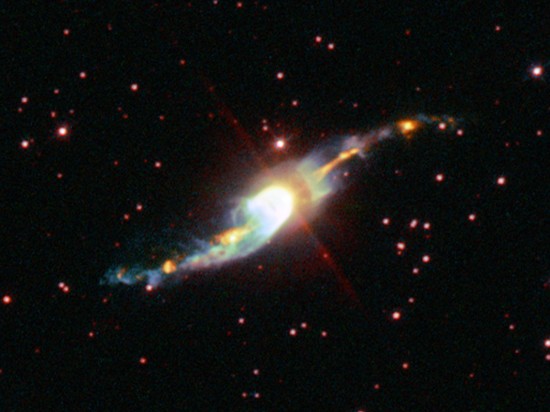 According to prevailing theory, before a star reaches the final white dwarf stage in its evolution, it is thought that it experiences disequilibrium caused by the fusion of heavier nuclei, whereby it ejects vast quantities of matter—it “sloughs off” its outer layers. It is thought that the expanding cloud of dust and gas, or nebula, is illuminated by the senescent star at its center, so it is that reflected light that astronomers detect with their instruments.

Nebulae come in all shapes and sizes: round, elliptical, interlocking rings, or nested cylinders. Sometimes they have long tendrils and symmetrical hourglass shapes, such as in the image of Henize 3-1475 at the top of the page. According to conventional theories, such features are the result of shock waves, or stellar winds blowing off the parent star crashing into the slower material ahead of them.

In the case of the Garden Sprinkler Nebula, the unmistakeable appearance of twisting Birkeland current filaments is clearly visible bisecting the center of the image. The overall configuration is an hourglass, with braided filaments, and the shapes within the nebula correspond to the filaments, helices, and pillars that electrical discharge in plasmas create.

In the laboratory, current-carrying plasma forms cells separated by thin walls of opposite charge called double layers. Could separation of charges also take place in nebulae? Everywhere in our own Solar System cellular structures separated by double layers abound: the Sun’s heliosphere, comet comas, and planetary magnetospheres are all examples of charge separation in plasma.

However, ESO astronomers have a different viewpoint: “To produce a jet, you require some sort of nozzle mechanism. So far, these theoretical “nozzles” remain hidden by dust that obscures our view of the centres of planetary nebulae.”

An electric discharge through a plasma cloud forms a double layer along the current axis. Positive charge builds up on one side and negative charge on the other side of this “sheath.” An electric field develops between the sides, and if enough current is applied the sheath glows, otherwise it is invisible. Electric currents flow across the sheaths. Signs of those glowing sheaths are visible in the Garden Sprinkler Nebula, enclosing the filaments.

Electric sheaths that are normally invisible are “pumped” with electrical energy from Birkeland currents in which they are immersed. Electromagnetic forces draw matter from the surrounding space into filaments where the higher current density causes the nebular “gases” to glow electrically.