Home Picture of the Day SunShots 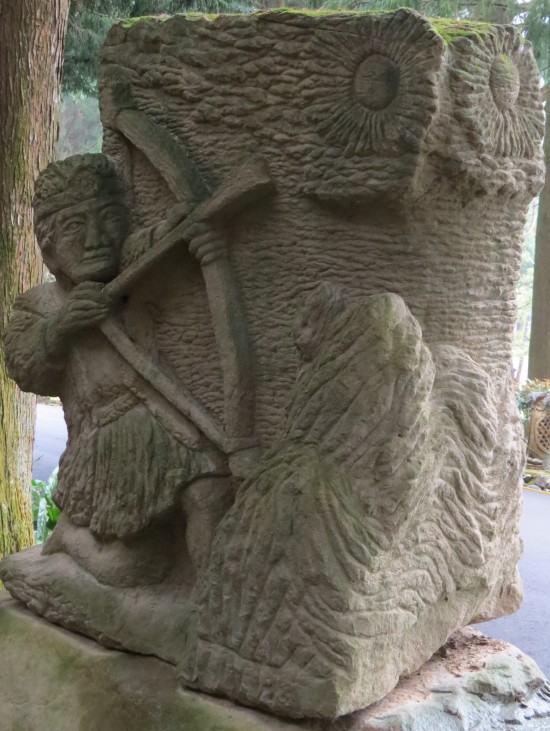 In the study of myth, the question of metaphors presents many a challenge.

When does a ‘sun’ literally refer to the quotidian sun and when is it a metaphor for some other bright sky light? Hard-and-fast rules are risky; every tradition is best examined in its own right.

One group of myths that seem to concern some other luminaries than the familiar sun is the cross-cultural theme of ‘sun shooting’. In this, one, two or more ‘suns’ are found to be unsatisfactory, often for shining too brightly, and are brought down by the arrows of one or more heroes, leaving only the present sun in the heavens.

In cases where the assault results in the victim’s fragmentation there can be no question that the object was not the real sun. This was the fate that befell Ta-vi, ‘the sun-god”, upon raising the ire of Ta-wats, ‘the hare-god’, in a myth from the Ute (primarily of Utah and Colorado):

‘Ta-wats awoke in great anger, and speedily determined to go and fight the sun-god. After a long journey of many adventures the hare-god came to the brink of the earth, and there watched long and patiently, till at last the sun-god coming out he shot an arrow at his face, but the fierce heat consumed the arrow ere it had finished its intended course; then another arrow was sped, but that also was consumed; and another, and still another, till only one remained in his quiver, but this was the magical arrow that had never failed its mark. Ta-wats, holding it in his hand, lifted the barb to his eye and baptized it in a divine tear; then the arrow was sped and struck the sun-god full in the face, and the sun was shivered into a thousand fragments, which fell to the earth, causing a general conflagration.’

A solar referent is also less likely in cases where multiple so-called ‘suns’ were targeted. Where two are concerned, an overlap occurs with the motif of ‘two rival suns, one of which becomes the sun, the other the moon’. Thus, the Karen (Myanmar) spoke of ‘two suns’, which once ‘came forth, but the heat was so great that neither man nor beast could endure it.’ To remedy this, a man by the name of Thye-kha ‘went up into the valley of mount Ra-ko-sho, and shot an arrow into the face of one of the suns, and it ceased to give light and became the moon, which God appointed to rule over the night.’ The other, presumably, turned into the present sun.

This storyline was also common among the natives of Taiwan. For example, the Atayal (northern Taiwan) used to relate that once ‘two suns circled around in the sky, and there was no separation between day and night. One of the suns was much larger than the one we see today, and it caused the weather to be extremely hot. The scorching heat caused the plants started to shrivel [sic! MAS] and the rivers started to dry up which made agricultural crops impossible to grow. The people on earth suffered greatly.’ Eventually, ‘The bigger sun was shot and burning blood oozed out from its wound.’ The moon seen today is its remnant and the distinction of day and night has existed ever since. A neighbouring nation, the Bunun (originally of the central mountain range) likewise recalled ‘that there were once two suns in the sky. The heat was unbearable until the ancestor of the Bunun Tribe climbed to the top of Mt. Jade and blinded one of the suns, so it is now the cool moon.’

Variants on the same theme of the celestial archer involve seven or nine ‘suns’. This number suggests that none of these myths originated in relation to the actual sun and moon. A Mongolian tale serves as an example:

‘Once upon a time there rose seven suns in the universe, and it was exposed to a burning drought. The earth was heated fiercely, the streams and rivers evaporated, the plants and trees were parched. People and living beings suffered from intolerable heat, and horses and animals were tormented by painful thirst. It was dreadfully difficult to live or even survive. However, there lived a very good archer, called Erkhii Mergen. He was an excellent archer, who could shoot skillfully what he saw and hit accurately at what he aimed. A stream of people went to him, and requested him to shoot and destroy the many suns which rose in the sky. … Then he said, ‘I will shoot the seven suns with one arrow each and destroy them’ … From the Eastern side then Erkhii Mergen began shooting the seven suns, those that rose in a file from the East to the West in the sky. He hit and destroyed six of the suns with six arrows. … the last sun was afraid of the archer and it disappeared to hide behind a western mountain. … People say the last sun of this world was frightened of Erkhii Mergen and went behind a mountain, and it is for this reason that the day and the night appear in succession.’

Taking a shot at explaining such myths, some might consider bolides or meteorite impacts – both of which may feature large dazzling bodies, singly or in multiples, which may violently explode and cause conflagrations. However, such events last seconds to minutes and could have nothing to do with the first installation of the sun and moon in their current positions. This impression is strengthened by further variations on the theme.

Some versions associate the pesky suns with a form of the axis mundi, such as a cosmic tree. For instance, in Chinese mythology the giant ‘support mulberry’ (fú sāng), rooted in ‘T’ang (hot water) Valley’, was stated to be the place ‘where the ten suns were bathed’: ‘This is north of Hei Ch’ih. In the water is a large tree with nine suns in the lower branches and one in the upper.’ ‘When one sun gets to the tree, another comes out.’ An early commentator added: ‘In the top of the jo tree are ten suns, resembling flowers strung together, casting light downward.’ On one occasion, all ten suns appeared in the sky at once, producing an intense life-threatening heat on the earth. The archer Hòu Yì then eliminated all except the extant sun: ‘In early times ten suns came out together, burning the vegetation to a crisp.’ ‘Yao ordered Yi to shoot the ten suns, and he hit nine.’

Alternatively, some associated this episode of ‘shooting stars’ with the ‘separation of heaven and earth’, one of the defining events in global creation mythology. This is illustrated in a tradition from the Dusun (west Sabah, Malaysia):

‘Long ago when the sky was very low down, only a man’s height from the ground … the sky was very low. Then the man was very angry because his wife was ill, and he made seven blow-pipe arrows. Early the next morning he took his blow-pipe with him and went to the place where the sun rises and waited. Now at that time there were seven suns. When they rose he shot six of them and left only one remaining; then he went home. At the time the man shot the suns … the sky had risen to its present place; since, when the man had shot the six suns, the remaining sun, being frightened, ran away up into the air and took the sky with it.’

The internal consistency between such superficially preposterous accounts from historically unrelated cultures, interlocking with equally puzzling themes such as the ‘erstwhile rivalry of sun and moon’, the ‘noosing of the sun’ and ‘stationary suns’, cries out for a rational explanation. A long shot it may be, but a compelling solution is offered by plasma physicist Anthony Peratt’s hypothesis of an intense aurora which occurred globally in prehistoric times. This would have taken the form of atmospheric plasma z-pinches developing columnar instabilities. Each Peratt Column would have pinched into some nine superimposed plasmoids. Generally, only one, two or three of these will have appeared at a time in visible light, but on extreme occasions all may have manifested at once, emitting intolerable synchrotron radiation light. While the columns typically appeared motionless, some may have drifted over the horizon.

‘Fiery arrows’ dispatched towards the plasmoids, shattering of individual plasmoids, links with the axis mundi, devastating heat and wildfires, the stationary position indicated in some versions, the lifting of the ‘sky’ and the appearance of the real sun and moon subsequent to the demise of the column – all of these correlative motifs fall into place on the same adventurous model. The upshot? The earth’s ionosphere and magnetosphere may have passed through periods of extreme turbulence, of which humans have preserved frail but persistent memories.