Answer:
Science does not begin with mathematics, but with direct observation, experiment, and special insights into cause-and-effect relationships.

Many popular mathematical constructs today were devised early in the 20th century to help explain aspects of gravity-centric theory. Now, the picture has changed, and gravity is no longer sovereign on the macrocosmic scale. The cosmic “container” of objects in space is not an empty vacuum. Nor is it the neutral plasma medium that theorists once assumed based on limited observations.

We now see massive flows of charged particles, ranging from immeasurably subtle to explosively energetic — a universe more hugely complex than most theorists of the 20th century ever imagined. Gravitational models, based on a single Newtonian equation, can no longer describe things now displayed in the heavens across the full electromagnetic spectrum. 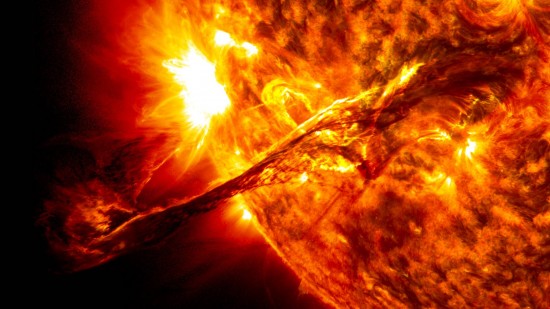 A solar Eruption on August 31, 2012, as captured by NASA’s Solar Dynamics Observatory. What we see is a plasma instability, the effect of high energy electric discharge between regions of different charge. Some day we may be able to predict such occurrences mathematically, but the electrical nature of such events has been recognized for decades.

The new discoveries underpinning the Electric Universe paradigm will find their support in new mathematical models as well. But these models will work only by accommodating the vast complexity of electrical circuitry in space.

The 20th century’s leading experts on plasma science drew some remarkable conclusions. Based on things learned in the laboratory, they offered a new understanding of electrical phenomena in space. Most prominent of these pioneers was Nobel Laureate Hannes Alfvén, whose work laid the foundations for plasma cosmology. While supporting his work with rigorous mathematical analysis, Alfvén repeatedly warned against mathematical flights of fancy disconnected from observations in the laboratory.

Nevertheless, the supremacy of mathematics is a common theme in popular science today, harking back to the famous quote by Galileo: “Nature’s great book is written in the language of mathematics.” But many leading scientists have noted the danger when theorists place mathematics above observation and critical inquiry.

Today’s scientists have substituted mathematics for experiments, and they wander off through equation after equation, and eventually build a structure which has no relation to reality.
~Nikola Tesla

If scientific reasoning were limited to the logical processes of arithmetic, we should not get very far in our understanding of the physical world.
~Vannevar Bush

Mathematics is well and good but nature keeps dragging us around by the nose.
~Albert Einstein

When there is no experimental test, and observation is limited, a purely mathematical idea can masquerade as reality. The gravity-centric universe of 20th-century theory gave us many illustrations of this dilemma. When astronomers discovered that the rotation of galaxies violated their gravitational models, they turned to something invisible to save appearances. That’s how “dark matter” entered the astronomer’s lexicon. The theorists imagined the existence of invisible matter wherever it was needed to make the gravitational description of galaxies work. Their cover story actually succeeded. Soon the scientific media began to report “discoveries” of dark matter. Later some reported that astronomers could “see” it. They “saw” it by using additional math, enhanced by computer simulations.

The popular idea of black holes arose in much the same way. It happened as we began to observe the intense energies at the centers of galaxies. The energies were so high that gravity could not account for them. Theorists were then tempted to use a mathematical sleight of hand, “discovering” the terrifying grandeur of black holes. Indisputably, the mathematics of black holes violated all classical physics. The calculations even provoked a measure of humor when theorists divided by zero. Yet the theory of black holes caught on—a fictional projection arising solely from theoretical equations.

Let there be no misunderstanding. If we know what we’re calculating, math works. And not just in manufacturing, where precision is paramount. Planets and moons move on highly predictable orbits. Based on gravity alone, we guide space probes to planets, comets, and asteroids. We measure their “mass” by their gravitational tug on spacecraft. The math is impressively accurate. What is there to argue about?

The real issue arises from the direction of modern discovery. Far too many tenets of gravity-centric theory are contradicted by great surprises of the space age. That realization underpins the Electric Universe challenge to standard theory: electrical theorists remind us that when an entire paradigm is thrown into doubt, it’s time to revisit all assumptions. This is necessary even if the accepted paradigm has hardened around its mathematical foundations. It’s time to look again at the evidence. Pay attention to new data. And most importantly, follow the surprises, the things that don’t fit. In such circumstances, evidence will often shout its message to us, as key patterns emerge, previously unseen.

It seems likely that the most important new directions in physics will involve multidisciplinary pattern recognition to break the momentum of institutionalized theory. Questions too long ignored must be brought front and center. Direct evidence then rises to the top, not mathematics. First things first. Do the observed effects arise reasonably from the newly-proposed causes? Does the new perspective unify facts that previously appeared contradictory? How well do the new data from space resonate with controlled laboratory experiments?

Of course, mathematics will follow as a new paradigm unfolds. In fact highly capable mathematicians are now coming into the Thunderbolts Project, attracted to new opportunities to quantify our Electric Universe.