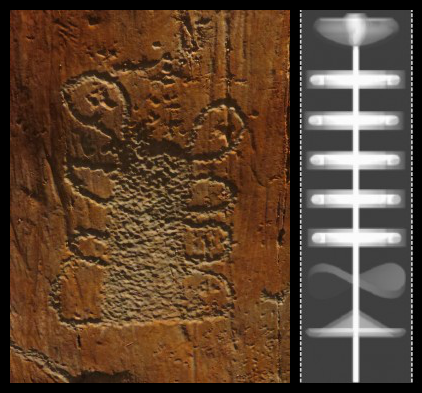 Things may be carved in stone and still be nebulous.

Petroglyphs come without captions; clues of their intended meanings are more often missing than not. Yet though certainty is rarely to be had, the quest for the meaning of rock art is as legitimate as any line of research in archaeology.

The image above is part of Europe’s second-largest repository of petroglyphs after Valcamonica (Italy). Located in the Vallée des Merveilles (southeastern France) are an estimated 30,000 carvings hugging the southern and western slopes of Mount Bégo – a peak whose name appears to be based on an Indo-European word for ‘god’. The authorities propose a rough date of 3000 BCE for the carving activity, based on depicted agricultural tools, but concede the infirmity of the guess. An upper boundary of c. 8000 BCE is set by the clearing of glacial ice in the area.

The overwhelming majority of petroglyphs in the valley consists of variations on the themes of ‘corniforms’ or horns, ploughing oxen and halberds, with symbolic connotations that escape modern visitors. The imagery seems steeped in religious symbolism, but less than 1% of it depicts indisputably cosmological or mythological subjects. Preciously few seem to be related to the plasma instabilities related to rock art by Anthony Peratt – a few spirals and concentric circles, encircled rayed ‘suns’ or wheels, an elongated hand-held staff with knots at various distances and surmounted by a bird, the group called ‘stairway to paradise’ and the curious abstract configuration reproduced above.

Described by the park authorities as a ‘rectangular area with curled appendages’ or ‘with closed appendages’, this puzzling form evades attempts at a practical or mundane interpretation. Except for the solid rectangle at the centre, the appendages bear a striking resemblance to a category of petroglyphs Peratt dubbed ‘pipettes’. These match a stage in the sequence of an intense plasma z-pinch column, when stacked plasmoids appear as flattened bars with bright foci at the sides:

‘Where the toroid stack consists of both spheroidal and flattened toroids, the optical radiation is brightest where the plasma is densest, i. e., closest to the edges of the toroids. This leads to a less well-known but still common petroglyph known as a “pipette” … The pipettes shown … all have symmetrical pairs of “eyes”. However, many petroglyphs simply show the outline of a pipette without any indication of hot spots or “eyes”.’

Although the total number of concatenated plasmoids is typically 9, often only a few are seen at a time. Did the anonymous artist at Mount Bégo commit the spectacular sight of four stacked toroids to the archaeological record, part of extraordinary plasma activity in the atmosphere above? Arguably, but that would pose the question why so little other art at the site seems to relate to similar phenomena.

Perhaps the site was a centre of pilgrimage where religious ceremonies were combined with the production of petroglyphs. Many favourite themes may have been traditional, handed down from generation to generation, while on rare occasions exceptional displays in the heavens may have been incorporated, reinforcing the sanctity of the mountain. Indeed, it is not impossible that the dominant motifs of ‘horns’ and ‘halberds’ and the mountain’s hallowed status themselves ultimately traced to intense aurorae, but this remains entirely conjectural.

The search for the original inspiration of petroglyphs remains a rocky subject. Thorough surveys of the typology, the orientation and the geographical and chronological distribution of individual forms may lead to definitive breakthroughs in our understanding, but this work has yet to be carried out. For now, the most prudent approach is to refrain from sweeping statements, assess each site and image in its own immediate context and restrict matches with hypothetical atmospheric plasmas to non-figurative cases where alternative explanations are lacking. This is not rocket science – it’s rock science.