Home Beginner's Guide to the EU chapter 1 — what is the electric universe?

chapter 1 — what is the electric universe?

Open a standard textbook in astronomy and read the discussion of galaxies, stars and planets. It will appear that gravity alone organized the cosmos and now keeps it running. We all know that electricity powers our lights, runs our computers and, in an unleashed form, creates static shocks and awe-inspiring lightning bolts. But for hundreds of years astronomers believed that across interplanetary, interstellar and intergalactic distances, only gravity could do the real work. Only gravity could gather clouds of gas and dust into a star or a planet. Only gravity could produce galaxies and massive clusters of galaxies.

To inhabitants of earth, lightning is a familiar occurrence. But only recently have we begun to discover amazing counterparts in space. Credit: NOAA Photo Library, NOAA Central Library; OAR/ERL/National Severe Storms Laboratory

Lightning is electric—like a welding arc. The Northern Lights are electric—like a neon sign. A sunny day is electric. We work and play in an electric field. We don’t think about it because we’re used to thinking only gravity is there. Space probes find electric features in comets, planets, stars, and galaxies. X-ray and radio telescopes find electric features connecting stars and galaxies. The Electric Universe is a way to begin thinking about all that electricity in the cosmos.
~Mel Acheson, Contributing Editor, Thunderbolts Picture of the Day

Though not replacing gravity, the Electric Universe adds the essential role of charged particles in motion. Charged particles fill all of space as electrically conductive plasma. Plasma behaves differently than gas. The Sun is plasma. Stars are plasma. Galaxies are plasma. The filaments of magnetized and radiating matter between stars and between galaxies are plasma. The isolated islands we once imagined in space do not exist. A web of electromagnetism connects planets, moons, stars and galaxies.

The movement of charged particles is an electric current. These currents give rise to pervasive magnetic fields and to high-energy electrical events.  They power exploding stars and erupt as intensely energetic jets from galactic cores. Modern telescopes can now view these events at high resolution and across the full electromagnetic spectrum. Unexpected, elaborate structure has sprung to life in radio, infrared, ultraviolet, and X-ray wavelengths. These surprises of the space age call for a reexamination of long-held theories about how the universe works.

The EU is a growing body of fact and theoretical interpretation—a new perspective on the cosmos. The factual content comes primarily from space observations and laboratory experiments. In contrast, much of the gravity-centric view is based on mathematics. Gravity is relatively easy to model mathematically. But electricity in space is a much different matter, due to the complex interplay of electric currents and magnetic fields. It will not be mathematics that opens the door to the Electric Universe, so much as direct observations and experimental analogies. See Common Misconceptions 3, “Where’s the Math?” 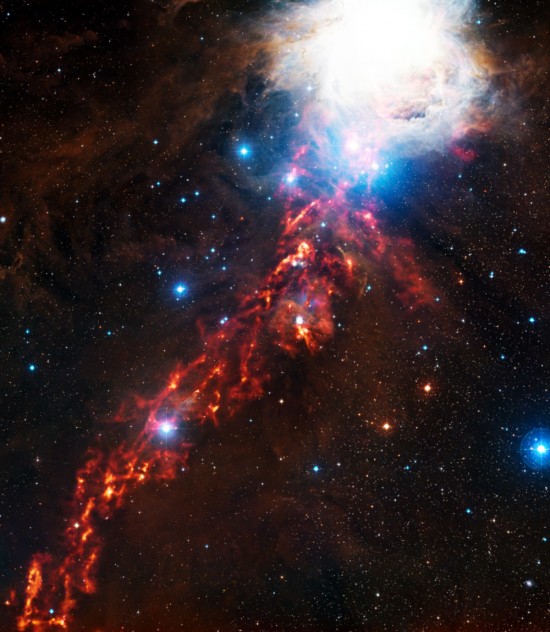 Luminous clouds in the Orion constellation reveal the power of electrified plasma to create ribbons of star formation in the vacuum of interstellar space. Credit: ESO-operated Atacama Pathfinder Experiment (APEX) in Chile.

Our subject in these pages is not just a theory, but a new paradigm. At every scale, the electric force plays a vital role. Its effects range from the most subtle interactions of subatomic particles to the immense alignments of galactic clusters.You can begin your personal investigation at either end of the scale, or anywhere in between. And wherever you begin, you’ll be surprised at how many of today’s scientific discoveries support this new view of the cosmos.

The visible universe is a theater of charged particles. A dance of electrons and protons holds it together. We see its rhythms and geometries in microscopic detail, even as its music plays out across the cosmos: atoms and molecules joined by the electric force; stars and galaxies organized and energized by the same force; and on our little planet Earth, living organisms animated by the electricity of life. No empty space exists. Everything we now see is connected by the universal dance of charged particles.
~David Talbott, The Thunderbolts Project

The Electric Universe by Wallace Thornhill and David Talbott — Chapter 1

What attracts me to the EU is that it takes into consideration the electrical properties of matter to explain the functioning of the universe.
~Franklin Anariba, PhD., Singapore University of Technology and Design

The Electric Universe explores how electricity influences everything around us, from the electricity that powers your brain, to the lethal discharges of the average thunderbolt, to the beauty of the auroras, to the electrified plasma that makes up 99.999% of the visible universe.The EU suggests that electricity plays a more significant role in the universe than is usually credited, and it can be tested with science by experts and amateurs alike.
~Ian Tresman,  www.plasma-universe.com

Reading about the Electric Universe is like putting on a different pair of glasses and looking at all familiar things in a completely different way. The reason familiar things look different is that the EU takes powerful electromagnetic forces into account. Living on the surface of the earth,we notice little of these electromagnetic forces, we only feel gravity pulling us down, but imagine floating in space as a charged particle with pushing and pulling forces all around; that will be some ride!
~Gerard Bik, The Netherlands

The EU is a comprehensive, interdisciplinary model that is built upon electric engineering, plasma physics, chemistry, biology, and geology. But what makes it truly unique is its emphasis on human and planetary history, as found in wide-ranging studies from archaeology to world mythology.
~Evan Camp, 8th-grade science teacher and EU2013 speaker