Essential Guide to the EU – Introduction

The New Picture of Space

Now more than ever, the exploration of our starry Universe excites the imagination. Never before has space presented so many pathways for research and discovery.

New observational tools enable us to “see” formerly-invisible portions of the electromagnetic spectrum, and the view is spectacular. Telescope images in X-ray, radio, infrared and ultraviolet light reveal exotic structure and intensely energetic events that continually redefine the quest as a whole.

Spectrographic interpretation has grown hand-in-hand with faster, large-memory computers and programs, in sophistication and in broad scientific data processing, imaging and modeling capability.

Standing out amidst an avalanche of new images is the greatest surprise of the space age: evidence for pervasive electric currents and magnetic fields across the universe, all connecting and animating what once appeared as isolated islands in space. The intricate details revealed are not random, but exhibit the unique behavior of charged particles in plasma under the influence of electric currents.

The telltale result is a complex of magnetic fields and associated electromagnetic radiation. We see the effects on and above the surface of the Sun, in the solar wind, in plasma structures around planets and moons, in the exquisite structure of nebulas, in the high-energy jets of galaxies, and across the unfathomable distances between galaxies.

Thanks to the technology of the 20th century, astronomers of the 21st century will confront an extraordinary possibility. The evidence suggests that intergalactic currents, originating far beyond the boundaries of galaxies themselves, directly affect galactic evolution. The observed fine filaments and electromagnetic radiation in intergalactic and interstellar plasma are the signature of electric currents. Even the power lighting the galaxies’ constituent stars may indeed be found in electric currents winding through galactic space. 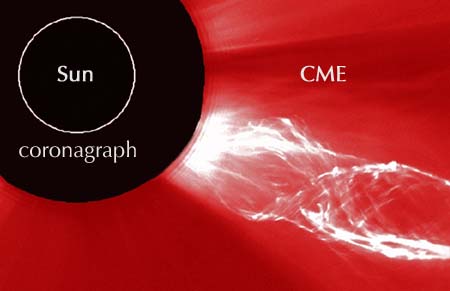 In a Coronal Mass Ejection (CME), charged particles are explosively accelerated away from the Sun in streaming filaments, defying the Sun’s immense gravity. Electric fields accelerate charged particles, and nothing else known to science can achieve the same effect. If the Sun is the center of an electric field, how many other enigmatic features of this body will find direct explanation?    Credit: SOHO (NASA/ESA)

It was long thought that only gravity could do “work” or act effectively across cosmic distances. But perspectives in astronomy are rapidly changing. Specialists trained in the physics of electricity and magnetism have developed new insights into the forces active in the cosmos. A plausible conclusion emerges. Not gravity alone, but electricity and gravity have shaped and continue to shape the universe we now observe.

The early theoretical foundation for modern astronomy was laid by the work of Johannes Kepler and Isaac Newton in the 17th and 18th centuries. Since 1687 when Newton first explained the movement of the planets with his Law of Gravity, science has relied on gravity to explain all large scale events, such as the formation of stars and galaxies, or the births of planetary systems.

This foundation rested on the observed role of gravity in our solar system. Research into the nature and potential of electricity had not yet begun. 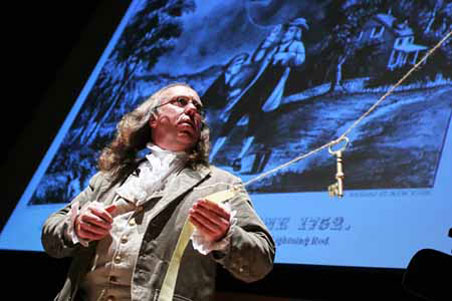 Franklin’s experiments with electricity occurred after the directions of gravity-only astronomy were already well-established.  Credit: Photo courtesy of the Benjamin Franklin Tercenary

By the start of the 20th Century a Norwegian researcher, Kristian Birkeland (1867-1917), was exploring the relationship between the aurora borealis and the magnetic fields he was able to measure on the Earth below them. He deduced that flows of electrons from the Sun were the source of the “Northern Lights” — a conclusion confirmed in detail by modern research. It would be at least another seventy years before the phrase “Birkeland currents” began to enter the astronomers’ lexicon.

In the latter half of the 20th Century, Alfvén’s close colleague Anthony Peratt published a groundbreaking textbook on space plasma, Physics of the Plasma Universe, the culmination of his hands-on, high-energy plasma experiments and supercomputer particle-in-cell plasma simulations at the Department of Energy’s Los Alamos Laboratory in New Mexico, USA. The book has continued to serve as a guide to specialists in the field.

A new tone in astronomy occurred as engineers pointed radio telescopes to the sky and began to detect something astronomers had not expected — radio waves from energetic events in the “emptiness” of space. At the Second IEEE International Workshop on Plasma Astrophysics and Cosmology, 1993, Kevin Healy of the National Radio Astronomy Observatory (NRAO) presented a paper, A Window on the Plasma Universe: The Very Large Array, (VLA) in which he concluded,

“With the continuing emergence of serious difficulties in the “standard models” of astrophysics [and] the rise of the importance of plasma physics in the description of many astrophysical systems, the VLA (Very Large Array) is a perfect instrument to provide the observational support for laboratory, simulation, and theoretical work in plasma physics. Its unprecedented flexibility and sensitivity provide a wealth of information on any radio emitting region of the universe.” 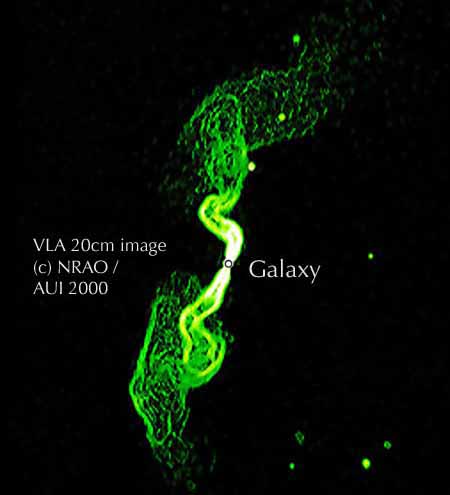 Active galaxy 3C31 (circled at center) is dwarfed by the plasma jets along its polar axis, moving at velocities a large fraction of the speed of light. How might the electrical potential along the immense volume of this active region affect the evolution of this galaxy and its billions of stars? Credit: NRAO’s Very Large Array, and Patrick Leahy’s Atlas of DRAGNs

At the start of the 21st Century, Wallace Thornhill and David Talbott wrote their collaborative book, The Electric Universe, and electrical engineer and professor Donald E. Scott authored The Electric Sky. Together these works provide the first general introduction to a new understanding of electric currents and magnetic fields in space.

Leading the way in technical publication has been the Nuclear and Plasma Sciences Society, a division of the Institute of Electrical and Electronic Engineers (IEEE). This professional organization is one of the world’s largest publishers of scientific and technical literature.

Standing on the shoulders of the electrical pioneers, Carl Fälthammar, Gerrit Verschuur, Per Carlqvist, Göran Marklund and many others continue to extend groundbreaking plasma research to this day.

The Limits of Gravitational Theory

The Law of Gravity, which relies exclusively on the masses of celestial bodies and the distances between them, works very well for explaining planetary and satellite motions within our solar system. But when astronomers tried to apply it to galaxies and clusters of galaxies, it turns out that nearly 90% of the mass necessary to account for the observed motion is missing.

The trouble began in 1933 when astronomer Fritz Zwicky calculated the mass-to-light ratio for 8 galaxies in the Coma Cluster of the Coma Berenices (“Berenices’s hair”) constellation. At the time, it was assumed that the amount of visible light coming from stars should be proportional to their masses (a concept called “visual equilibrium”). As Zwicky was to realize, the apparent rapid velocities of the galaxies, around their common center of mass (“barycenter”), suggested that much more mass than could be seen was required to keep the galaxies from flying out of the cluster.

Zwicky concluded that the missing mass must therefore be invisible or “dark”. Other astronomers, such as Sinclair Smith (who performed calculations on the Virgo Cluster in 1936) began to find similar problems. To make matters worse, in the 1970s, radial velocity plots (radius from the center versus stars’ speed of rotation) for stars in the Milky Way galaxy revealed that the speeds flatten out rather than trail down, implying that velocity continues to increase with radius, contrary to what Newton’s Law of Gravity predicts for, and which is observed in, the Solar System.

In short, astronomers using the Gravity Model were forced to add a lot more mass to every galaxy than can be detected at any wavelength. They called this extra matter “dark”; its existence can only be inferred from the failure of predictions. To cover for the insufficiency they gave themselves a blank check, a license to place this imagined stuff wherever needed to make the gravitational model work.

Other mathematical conjectures followed. Assumptions about the redshift of objects in space led to the conclusion that the universe is expanding. Then other speculations led to the notion that the expansion is accelerating. Faced with an untenable situation, astronomers postulated a completely new kind of matter, an invisible “something” that repels rather than attracts. Since Einstein equated mass with energy (E = mc²), this new kind of matter was interpreted as being of a form of mass that acts like pure energy — regardless of the fact that if the matter has no mass it can have no energy according to the equation. Astronomers called it “dark energy”, assigning to it an ability to overcome the very gravity on which the entire theoretical edifice rested.

Dark energy is thought to be something like an electrical field, with one difference. Electric fields are detectable in two ways:  when they accelerate electrons, which emit observable photons as synchrotron and Bremsstrahlung radiation, and by accelerating charged particles as electric currents which are accompanied by magnetic fields, detected through Faraday rotation of polarized light. Dark energy seems to emit nothing and nothing it purportedly does is revealed through a magnetic field. One suggestion is that some property of empty space is responsible. But empty space, by definition, contains no matter and therefore has no energy. The concept of dark energy is philosophically unsound and is a poignant reminder that the gravity-only model never came close to the original expectations for it. 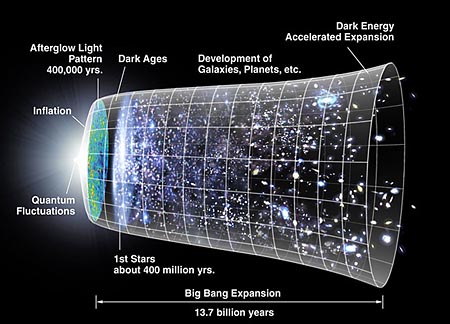 This artistic view of the standard model of the Big Bang and the expanding Universe seems to present a precise picture of cosmic history. A much different story emerges as we learn about plasma phenomena and electric currents in space.    Credit:  NASA WMAP

Taking the postulated dark matter and dark energy together, something on the order of twenty-four times as much mass in the form of invisible stuff would have to be added to the visible, detectable mass of the Universe. That’s to say, in the Gravity Model all the stars and all the galaxies and all the matter between the stars that we can detect only amount to a minuscule 4% of the estimated mass: 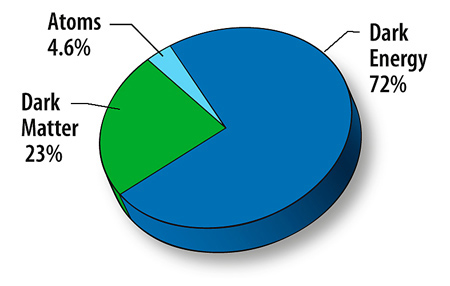 Chandra X-ray Observatory estimates of the “total energy content of the Universe”. Only “normal” matter can be directly detected with telescopes. The remaining “dark”matter and energy are invisible.   Image Credit: NASA WMAP

Critics often point out that a theory requiring speculative, undetectable stuff on such a scale also stretches credulity to the breaking point. Something very real, perhaps even obvious, is almost certainly missing in the standard Gravity Model.

Is it possible that the missing component could be something as familiar to the modern world as electricity?