Home Picture of the Day Gaslights in the Radio Age

Gaslights in the Radio Age 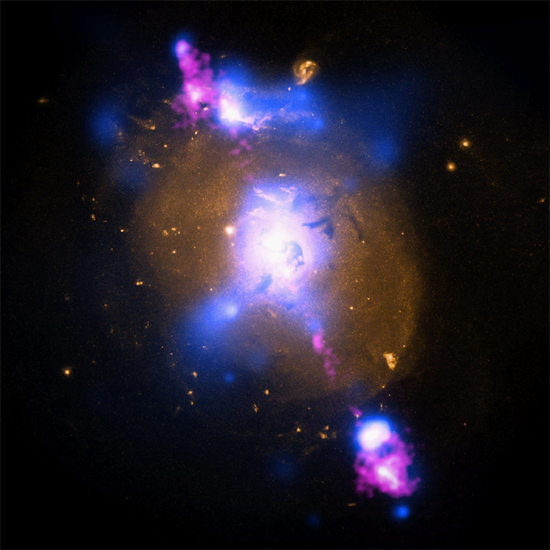 Modern instruments enable astronomers to look at the universe in wavelengths of light beyond human biological limitations. Astronomers are surprised that the x-ray and radio images are different from what they expected. Although they’re looking in a different light, they’re still seeing—trying to understand—with the same concepts and theories from the gaslight age that worked for optical light.

This recent composite image of a double-lobed radio galaxy superimposes images in X-ray (blue), optical (gold), and radio (pink). A relatively tiny plasmoid at the center of the galaxy stores and discharges electrical energy along the spin axis. The process is similar to that of a dense plasma focus device in a lab. The discharge, being an electrical current (a Birkeland current), self-confines itself into a filament of plasma by the magnetic field that it generates.

The electromagnetic forces cause the charge carriers and any neutral matter that is carried along with them to spiral along the axis to great distances, all the while radiating profusely at radio wavelengths. Variations in the plasma of the filament eventually trigger a double layer to form, which accelerates the plasma into a shock front and generates X-ray synchrotron radiation in the magnetic field.

The charge carriers dissipate and, at great distances, return to the galaxy’s equatorial plane. They spiral in toward the center, pinching again into filaments that appear as spiral arms, thus completing the circuit.

The conventional explanation stubbornly twists obsolete concepts into convolutions of pseudoscientific rationalizations. Before astronomers discovered that the universe was composed of plasma and electromagnetism, they explained their few optical observations with concepts of mass and gas. Rather than learn about the properties of plasma, they turned to mathematical distortions and illogical perversions of mass and gas to explain the new observations of plasma.

They assume that gas at a temperature of millions of degrees should behave as if it weren’t ionized (plasma). Mass should compress to infinite density to provide a mechanical source for the high energies. (The facts that black holes have no empirical basis and that their mathematical basis allows for at most one in a massless universe are ignored.) Magnetic fields should freeze and wind into the braided filaments, despite both empirical and theoretical findings that plasma is not a perfect conductor and thus can’t “freeze-in” magnetic fields. (Birkeland currents are “radio noisy” and must have an electrical input to make up the radiative losses.) Electricity should not exist, or if it does it shouldn’t do anything.