Home Picture of the Day New Ideas for New Stars 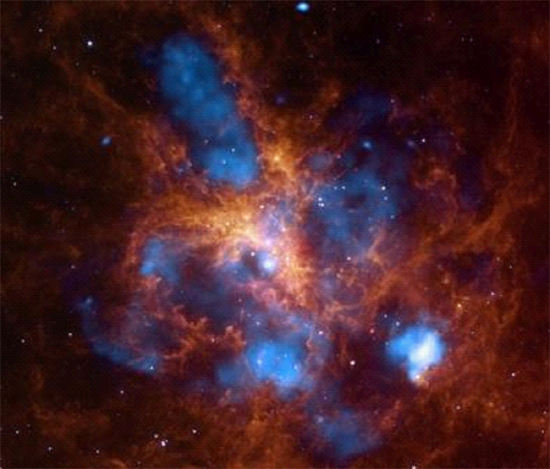 The Tarantula Nebula in the Large Magellanic Cloud, a companion galaxy to the Milky Way, is called a nursery for new stars. The growing awareness of plasma should make it also a nursery for new ideas to explain its features.

It features glowing filaments of ionized hydrogen and obscuring lanes of dust that often twist around each other. Fingers of x-ray radiation splay across it. About 2400 stars cluster in the center. The web of bright and dark filaments is expanding.

Pre-plasma explanations for the features are a grab-bag of conflicting ideas. The stars boil off fast winds, and supernovas blast away their outer layers. When this high-velocity gas collides with interstellar gas and dust, it generates shock fronts that push the gas and dust into filaments. The shock waves heat the gas to a million degrees or more, and it radiates x-rays. Ultraviolet radiation from the stars ionizes the hydrogen. The pressure of the stars’ radiation—or perhaps the pressure from the heated gas; two recent studies have reached opposite conclusions—is causing the nebula to expand.

“Gas” at a million degrees is fully ionized: it’s plasma. Cells of plasma that move past each other induce electric currents in each other. The currents generate magnetic fields, and the Bennett pinch effect will constrict them into filaments. The pinch forces will pull in nearby plasma (previously known as gas and dust) and create bubbles of depleted material. Forces between filaments tend to make them spiral around each other.

However, the “million degree” figure may be misleading. It is calculated from the assumption that the radiation is thermal. Most cosmic x-ray radiation is not thermal but synchrotron, emitted by fast electrons (aka current carriers) spiraling in a magnetic field. (See previous paragraph.) There may still be a thermal contribution: Double layers (DLs) that form in and around the currents accelerate ions. This fast material will collide with nearby material, it will be thermalized (the velocities will be randomized), and it will produce shock fronts.

The electric currents are energetic enough to ionize hydrogen and to cause it to glow—a cosmic analogy to a laboratory gas-discharge tube. The ultraviolet radiation from distant stars is not required.

If those stars are similar to the Sun, the “winds” from them don’t “boil off” but are part of the current that powers them. Closer investigation should show that the material accelerates away from the stars.

Hot giant stars are a result of high electrical energy in the circuits powering them. If an instability in the DL of a star’s photosphere interrupts the current flow, inductive energy in the rest of the circuit may flow into the DL and cause it to explode, producing a supernova.

The two studies’ opposite conclusions about the expansion of the nebula may be due to their failure to discern the common cause of radiation, pressure, and expansion: the external electric power. Loops of current subjected to increasing current generate an outward force on themselves. This is illustrated in solar prominences and CMEs. The Tarantula is responding to pumping up the power.

The awareness of plasma enables a unitary theory to explain the nebula’s features and their relationships. After two and a half millennia of trying to explain the lights in the sky with an assortment of theories about bumping billiard balls, we return to Heraclitus’s insight that “the thunderbolt steers the universe.”