Home Picture of the Day Where Do Asteroids Come From?

Where Do Asteroids Come From? 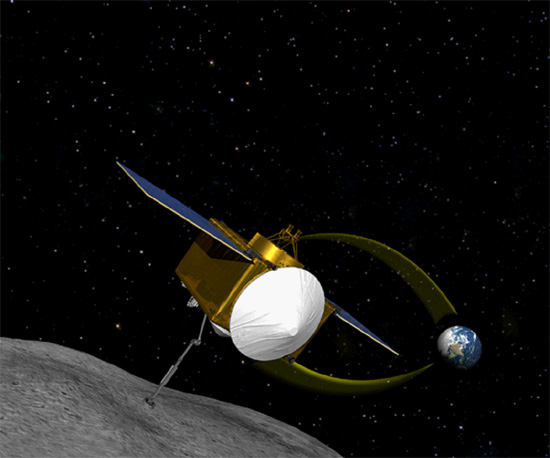 Are carbonaceous asteroids the precursors of life or the wreckage of life?

NASA plans to launch the Origins Spectral Interpretation Resource Identification Security Regolith Explorer mission, also known as OSIRIS-REx, in 2016. The spacecraft will orbit the Near Earth Object (NEO) 1999RQ36. After a year in close orbit, the probe will gather a sample of material from the object’s surface and bring the sample back to Earth.

1999RQ36 is over 500 meters in diameter, about a third of a mile. Its orbital period around the Sun is 1.2 years. Observations indicate that its surface contains quite a bit of carbon, so astronomers classify it as a carbonaceous asteroid. Its orbit crosses the Earth’s orbit, and it will come close to the Earth—a few times the Moon’s distance—several times during the rest of this century. Mission scientists are hoping to gain some insight into how to deflect it if it should threaten to collide with the Earth.

The primary goal of the mission is to get a sample of “asteroid dust” and to examine it in a lab. According to presently accepted theory, asteroids were the leftovers when planets condensed out of the solar accretion disk that formed the Solar System a few billions of years ago. Astronomers expect to find “pristine organic material that … might have seeded the sterile early Earth with the building blocks that led to life.”

Judging from previous missions, what the astronomers find will “surprise” them and send them “back to the drawing board.” They will not have collected a sample of “pristine material” but a sample of unquestioned presumptions from an obsolete theory. The nebular theory of planet formation never worked; astronomers abandoned it at one time; but they resurrected it because they could think of nothing better.

So they ignore the contradictions and spend their time—and taxpayers’ money—following their faith in their textbooks, much as the Medieval priest-scholars did, albeit with a different textbook. Their work at the drawing board will be an ad hoc addition to the unwieldy contraption that is presently accepted theory. It will enable them to interpret the surprising new data in an acceptable way, or at least in a way that will excuse attention to unorthodox ideas.

If they had more confidence in the scientific method than they do in textbooks and peer pressure, they would consider the evidence left by ancient astronomers. People around the world at the dawn of history were obsessed with observing and recording the movements of bodies in the sky. Modern astronomers accept the ancient astronomers’ identifications of those bodies as planets when remarking on their observational skills. When the content of the observations reveals a sky and movements that contradict the textbooks, the ancient evidence is dismissed out of hand as fantasies about gods.

If astronomers treated historical data with the same rigor and attention to detail with which they treat present data, they would consider that that evidence indicates the occurrence of events only a few thousands of years ago that reorganized the Solar System and resurfaced the Earth. Instead of taking for granted their speculation that 1999RQ36 is a pristine sample of billion-year-old proto-life, they would consider that it might be a space-fried fragment of life recently blasted from the ruins of the Earth.