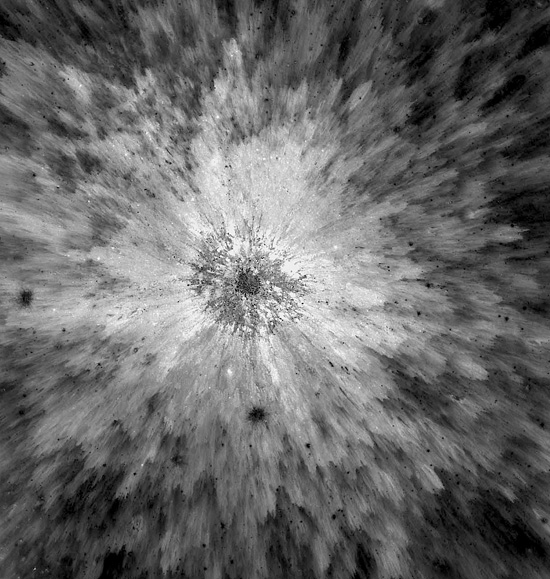 Water has been reportedly found inside rocks brought back from the Moon. If it is there, where did it come from?

In previous Picture of the Day articles, the presence of frozen water on the Moon was considered to be a theoretical possibility, but was not given much credence. Recent missions designed to explore the question more thoroughly have returned results that seem to show water in greater amounts than predicted by planetary scientists.

Michael Wargo, chief lunar scientist at NASA Headquarters in Washington, wrote: “NASA has convincingly confirmed the presence of water ice and characterized its patchy distribution in permanently shadowed regions of the moon.”

The Moon has long thought to have been created when a planet the size of Mars hit Earth billions of years ago. It was once a blob of molten magma that was torn out and hurled into orbit. Since it was born in an event that generated immense heat, there should be no water on or inside the Moon: it should have all boiled away.

Samples brought back by the various Apollo missions were predominantly dry. They contained metallic iron, as well, something that would not exist if there were any appreciable moisture in the samples. On January 25, 1994, NASA’s Deep Space Program Science Experiment satellite (Clementine) data indicated that the south pole of the Moon contained pockets of water ice shielded from the Sun by shadows cast from the walls of deep craters.

The recent Lunar CRater Observation and Sensing Satellite (LCROSS) and the Lunar Reconnaissance Orbiter (LRO) found almost pure ice crystals within craters that are permanently shaded. LCROSS, along with one of its rocket stages, struck Cabeus crater on October 9, 2009. When the explosive cloud rose up to 16 kilometers above the lunar surface, both LCROSS and LRO observed the debris with a variety of sensors. Spectrographic analysis showed water ice in the vapor plume.

Water is built from two hydrogen atoms and an oxygen atom. Hydrogen arrives on the Moon by way of the solar wind, with its one electron stripped, traveling along as a proton. If a hydrogen atom is removed from water, it becomes a hydroxyl molecule. Water and hydroxyl can bind to the lunar surface through electrical forces. Solar wind protons can form hydrogen atoms when they pick up loose electrons from the Moon’s charged surface, as well. The hydrogen might then combine with ionized oxygen atoms in the regolith to form water.

Five separate missions have reported the discovery of either water or hydroxyl on the Moon: Chandrayaan-1, Cassini, as it flew by on its way to Saturn, EPOXI, the Lunar Prospector, and LCROSS.

Chandrayaan-1 and EPOXI found that there was water or hydroxyl over the Moon’s entire surface during a portion of each day. Near the poles and in permanently shadowed craters the signal was stronger.

Water and other volatiles are most likely on the Moon because it and the Earth were once part of the same grouping of planets that wandered into the realm of the Sun long ago. We most likely shared a similar birth, with similar chemical gifts. From an Electric Universe perspective, the sparse presence of water on the Moon is not surprising. The catastrophic nature of the Moon’s experiences over time have removed most of what was once there, leaving only a pale shadow behind.

The Solar System’s gas giant planets and their accompanying moons suggest that our own Moon might once have been similar: theirs are largely covered in ice. Perhaps what has been seen in the deep polar craters on the Moon are all that remains.