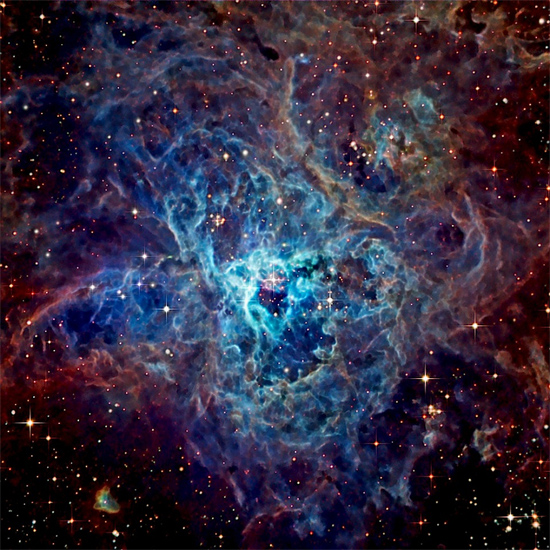 30 Doradus, otherwise known as the Tarantula Nebula, is a large glowing region in one of the closest galaxies to the Milky Way, the Large Magellanic Cloud. A well-known supernova, 1987a, exploded near the edge of the nebula.

The Tarantula Nebula gets its name because it has a spider-like appearance in small telescopes. Its average diameter exceeds 1000 light-years, making it one of the largest nebulae known. If it were located in our own galaxy at a distance of 1500 light-years, or as close as the Great Molecular Cloud in Orion, it would span 30 degrees of arc in the night sky, and would be so bright that one could read a newspaper by its light.

According to consensus astrophysicists, an active “star-forming region” is said to exist in the nebula. Standard theories of stellar evolution describe star formation in terms of collapsing clouds. For whatever reason, be it shockwaves from supernovae, high frequency radiation from nearby stars, or the gravity flux from a passing black hole, the majority of astronomers believe that gravitational compression is what drives star birth.

Stars are thought to result from a cloud of nebular gas slowly contracting toward a center of gravity that has somehow formed within it. The Nebular Hypothesis was originally expounded by Pierre Simon, Marquis de LaPlace in the eighteenth century as an amplification of Immanuel Swedenborg’s original Solar System cosmogony theory. LaPlace thought that stars, in general, form when nebular clouds develop concentrations, or gravity vortices, in higher density regions. Those densities gradually collapse into “accretion discs” that draw more and more gas and dust into them.

Once the accumulation reaches a certain point, thermonuclear fusion ignites, creating outward pressure that prevents further contraction. Stars are therefore thought to be a balancing act between gravity and radiation. Despite its dated condition, astronomers continue to cling to this, their only recourse.

Star-forming regions are conventionally associated with gamma rays, X-rays, and extreme ultraviolet shining from the “cosmic eggs” that appear to be the glowing tips of condensed gas balls. One of the most iconic images in modern astrophotography is the famous “Pillars of Creation” in the Eagle Nebula. The tops of the clouds, with their puffball structures, X-rays, and compact shapes are also said to be stellar nurseries, where standard theories meet colorful pictures.

Gas cannot be heated until it gives off X-rays without stripping electrons from the nuclei, forming a plasma. The correct model for a nebula is a neon light, glowing at the excitation frequency of a specific gas. Electricity passing through the tube causes plasma to glow with unique colors, depending on the gas content. Astronomers say shock waves from supernovae can activate many frequencies of light because the compressed gas heats up. However, since more than 90% of the light from nebulae radiates in the frequency range of ionized oxygen, they should be thought of as oxygen discharge tubes and not as clouds of gas.

The Electric Star hypothesis resolves many of the distorted opinions that arise from misunderstanding the role of plasma and electric fields in space. Rather than kinetic energy from gravitational compression, the Tarantula Nebula’s radiant emanations result from electric currents.

Electric discharges in a dusty nebula draw matter toward the current axis where it is caused to glow by particles accelerated in the axial electric field. Plasma sheaths form bubbles that are normally invisible until “pumped” with additional energy from the galactic Birkeland currents in which they are immersed. The strong electric field across these plasma sheaths accelerates particles and pushes them into “glow mode”.