Home Picture of the Day Rime of the Ancient Water Bridge

Rime of the Ancient Water Bridge 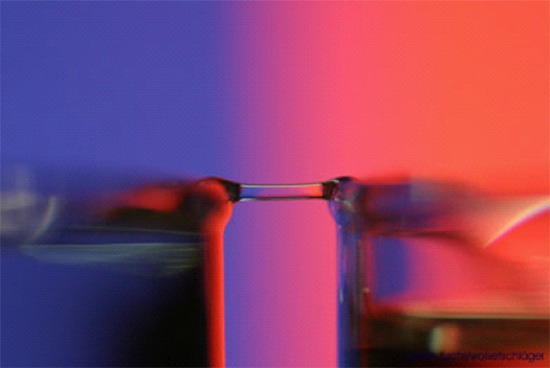 Discoveries in space plasma may provide an explanation for a century-old mystery.

Sir William Armstrong, an English hydraulics engineer, first observed the floating water bridge in 1893. It defied explanation and was ignored until recently. Findings in space plasma that have renewed attention to plasma’s electrical properties, a matter which itself has been neglected for a century, may provide an explanation that has been sitting in plain sight all along.

A water bridge is simple to produce. Two containers of pure water are set an inch or less apart. An electrode is inserted into each one, and a high voltage is struck between them. In short order, a spinning tube of water will stretch across the gap in defiance of gravity.

While the phenomenon and its possible explanation are interesting (and may be pursued in the links), this writer will for a moment prescind from the science and comment instead on the century of neglect. (My apologies to Samuel Taylor Coleridge and his ancient mariner.)

All in two electrified cups
With voltage high between,
Floating right across the gap
A water bridge was seen.

Day after day, day after day,
For a hundred years and more,
Respected theorists denied the sight:
‘Twas heresy, they swore.

Our settled knowledge overthrown!
That ever should this be!
Unorthodox the thoughts that rose,
From peer review set free.

About, about; in reel and rout
Did speculations dance;
And voices shrill argue still
The bridge’s significance/

And some in dreams assuréd were
To utter oaths uncouth:
Nine fathoms deep in certitude
Of orthodoxy’s truth!

But every observation that
Was spurned with scorn and mock
Revealed accepted theory
To be a bloody crock!

Ah! well-a-day! The thing to watch
Is the phenomenon:
The water goes its merry way;
Our thoughts must follow on.