Home Picture of the Day Gold, Glamour and Destruction 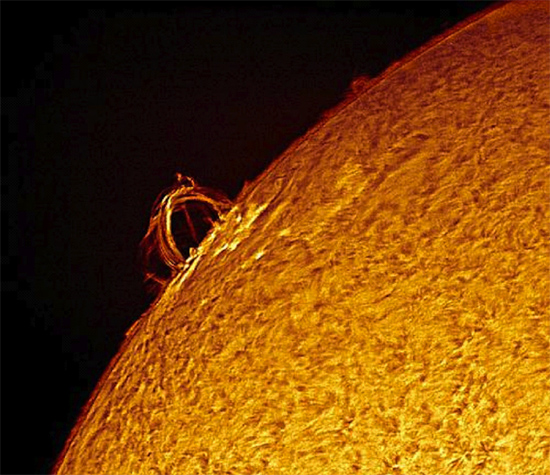 Could the Carrington Event of 1859 have had broader effects than originally assumed?

Imagine your posturing self-assurance as you parade on the dockside at Port Melbourne, dressed in the finest fashions the colony of Port Phillip can offer. Your beautiful new bride is elegantly bubbling beside you whilst showing off the latest copy of high Paris couture. Yes, my boy, you have made it! The year is 1859.

You came to the Victorian goldfields a pauper and struck it rich. You look across the bay to Frankston, Mount Martha, Dromana and Tubbarrubba where shortly even more goldfields will be pegged out. This was an era like no other and rags to riches were common, with no conniving government tax collectors to strip you of your ‘Paul Hogan’ fortune.

Now with ritzy wealth reflected in your grand finery, you are boarding the luxurious steam clipper ‘Royal Charter’ to fast tack up Port Phillip Bay and head home to England. Doubtless the gentry will fawn over your new found colonial riches.

This sleek iron sailing ship is a modern technical marvel. She is the fastest steam clipper in the world and on this trip she will break the Melbourne to England record by touching down in 58 days. Built for the Australian run, she is 80 meters long and weighs 3000 tonnes. She is carrying 388 passengers and 112 crew. But what else? This is a ‘gold’ ship. She is bursting with over 70,000 ounces of gold ($98 million today), 48,000 newly minted sovereigns, and the personal gold wealth (uncalculated) of passengers who struck it rich on the Victorian goldfields.

As you steam by Perth on September 1, 1859 all the passengers are delighted by an incredible phenomena. It is the ‘Aurora Australis’, but one so bright it lights up the night as if it were day. The captain, Thomas Taylor, notes he has never seen an Aurora this close to the equator before.

Skies all over planet Earth erupted in red, green, and purple auroras so brilliant that newspapers could be read as easily as in daylight. On the other side of the world, a brilliant Aurora Borealis is seen as far south as the Caribbean and Hawaii. This was the largest geo-magnetic storm ever recorded (NASA). Telegraph systems all over Europe and North America failed. Telegraph pylons threw sparks and telegraph paper spontaneously caught fire. But this was only the first portent from the heavens.

Just two months earlier a massive earthquake had occurred in Erzurum, Turkey, of force 9 on the Mercalli scale. Over 16 thousand people had perished. Was there a strange connection between these two events? But even stranger coincidences were to follow.

The rest of the ‘Royal Charter’s’ journey was pure bliss. The luxury cabins were a delight. The company boisterous and the sharing of ‘wealth laden’ future dreams enervating. As she beat down towards the English Channel all seemed well. But when she reached the north-western tip of Anglesey, on October 25, the barometer was dropping. The master, Captain Thomas Taylor, was advised to put into Holyhead harbor for shelter but he continued on to Liverpool.

During the night of October, the winds rose to Hurricane force 12 at over 160 kmh, in what became known as the ‘Royal Charter’ gale. Its direction changed from E to NNE, driving the ship towards the coast of Anglesey.

At 11 p.m. she anchored, but at 1.30 a.m. on October 26 the port anchor chain snapped, rapidly followed by the starboard. Despite cutting the masts to reduce the drag of the wind, the ‘Royal Charter’ was driven inshore, with the steam engines unable to make headway against the gale. The ship initially grounded on a sandbank, but in the early morning the rising tide drove her to the rocks.

Battered against the rocks by huge waves whipped up by winds of over 160 kilometers per hour, she quickly broke up. Most of the passengers and crew, a total of over 450 people, died. Many of them were killed by being dashed against the rocks by the waves rather than drowned. Others were drowned, weighed down by the belts of gold they were wearing around their bodies. The survivors, 21 passengers and 18 crew members, were all men, with no women or children saved.

The ‘Royal Charter’ storm was the worst of the entire nineteenth century with a total of 133 ships sunk during the storm. The death toll was around 800. What had caused this unprecedented megastorm? I believe we can look to another event that shows us precisely where our weather comes from.

In the heavens, the solar superstorm of 1859, also known as the ‘Carrington Event’, was the most powerful solar storm in recorded history. Richard Carrington sketched its magnitude whilst observing the bright flashes of a solar flare on the surface of the sun.

This was the same event that caused the disruption of telegraphs, the extreme glow of the Aurora Australis, earthquakes in Turkey, and finally the massively destructive ‘Royal Charter’ mega-storm. Quite probably ‘synchrotron’ radiation poured down on Earth. Tempel’s observations came shortly thereafter, when he sketched an enormous Coronal Mass Ejection (CME), with its terrible body blooming out as far as the width of the sun itself, during a solar eclipse a few months later. The electromagnetic connection with the sun controls our weather, not puny mankind with his imagined impact.

One more phenomena occurred that is painfully coincidental and baffles modern science. The world wide flu epidemic of 1859 was one of the worst ever, causing half a million deaths (Duffy. J.- Louisiana University press). Could solar flares and the CME’s synchrotron radiation stimulate viral growth?

As for the gold, many an Anglesey resident became rich overnight, and to this day salvage divers seek to recover some of the wealth with no success.

Note: Whilst filming on the Jurassic coast in England, I spoke to one of these professionals involved in the last attempt in 2005. Expert salvage diver John Ledger gave me some souvenirs from his incredible memorabilia. A few lead balls of rifle buckshot, a broken plate and some ‘Royal Charter’ ship’s rivets. These I have with me as I type this tragic tale – a sad legacy that has returned to Melbourne some 150 years later.