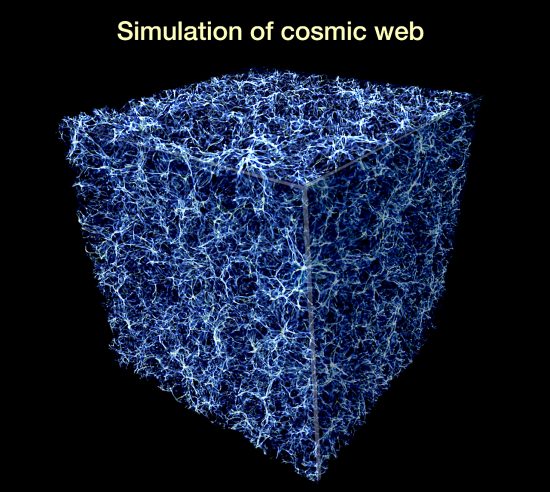 Consensus map of galaxy cluster distribution in a cubic section of the Universe. Credit: NASA, ESA, and E. Hallman (University of Colorado, Boulder)

Is the Universe expanding?

Modern astronomers believe that galaxies are receding from each other because they received “inflationary energy” imparted by the Big Bang. They estimate the recession to be about 71 kilometers per second for every 3.3 million light-years of spatial distance. This “dilation of space-time” is called the Hubble constant.

In the 1960s, a large-scale motion was thought to be superposed on the Hubble constant because the Local Group of galaxies containing the Milky Way appeared to be moving close to 600 kilometers per second toward the constellation Centaurus. A “great river of galaxies” is said to flow toward some gravitational source over 150 million light-years away. Not only the Local Group, but the Virgo supercluster, the Hydra-Centaurus supercluster, and other galactic superclusters exhibit anomalous acceleration toward a structure known as the Great Attractor.

The Great Attractor is thought to be associated with a group of objects called the Centaurus Wall. A problem with the observations is that the Wall does not possess enough mass density to influence superclusters of galaxies. Therefore, another force that is orders of magnitude more powerful than gravity is thought to exist, one that is beyond detection. They call that unseen force, “dark flow”, a derivative of dark energy theory.

Conventional redshift measurements of galaxies in the Local Group also show them flying toward the center of the Virgo cluster at nearly two million kilometers per hour. The Virgo cluster is 50 million light years away and whatever is pulling on the galaxies also remains invisible.

Recently, astronomers from the Max Planck Institute for Astrophysics, along with the University of California, conducted a new study of the Hubble constant. They found, to their surprise, that it does not match other estimates. Astronomer Sherry Suyu wrote:

“The Hubble constant is crucial for modern astronomy as it can help to confirm or refute whether our picture of the universe — composed of dark energy, dark matter and normal matter — is actually correct, or if we are missing something fundamental.”

It is not the intent of this paper to address dark matter and dark energy, since those ideas are discussed many times in previous Picture of the Day articles. Suffice to say that the information contained in the University of California, Davis press release relies on many assumptions.

One assumption is that galaxy clusters are large and far away, so they are looking for some way to show how far. However, the late Halton Arp conducted research indicating that compact galactic clusters are small and faint and are ejected from nearby active galaxies. Like quasars, those clusters are often embedded in radio and X-ray-emitting lobes coming from the parent galaxy.

They also assume that redshift is a Doppler effect, indicating velocity. Arp’s work revealed that galactic redshifts are mostly intrinsic, since galaxies with different redshifts are connected by bridges of luminous material. Redshifts, when adjusted to the parent galaxy’s reference frame, are periodic and occur only in preferred values.

In an Electric Universe, if galaxies within a cluster are oppositely charged from the cluster core, the core will pull them in toward the region of greatest charge density, so they will experience “anomalous velocity”. When there are regions of charge separation within a galaxy, then the material that is the same polarity as the cluster core will be blown back and away, like the coma and tail of a comet in the Solar System.

As Arp wrote in his book, Seeing Red:

“The greatest mistake in my opinion, and the one we continually make, is to let the theory guide the model. After a ridiculously long time it has finally dawned on me that establishment scientists actually proceed on the belief that theories tell you what is true and not true!”