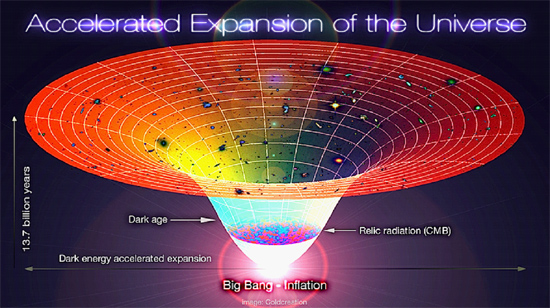 The Universe is said to have begun with a bang, which then became overblown.

This article could almost be completed with one statement: a theory built on questionable assumptions should never be the basis for new theories.

In a recent press release, astronomers declared that they found “proof” for the inflationary Big Bang theory in observations of the so-called Cosmic Microwave Background (CMB). The CMB is said to be the remnant signal left over from the beginning of the Universe.

Historically, in the early 1960s, Arno Penzias and Robert Wilson began to use the Holmdel Satellite Antenna as a research tool. The antenna was originally built to detect signals bounced off of the earliest satellite communication system known as Echo. The Echo satellite was an aluminized Mylar balloon 30 meters in diameter. Radio signals beamed from Earth were reflected by the satellite, allowing transcontinental radio wave broadcasts for the first time without relying on what was quickly becoming a saturated network of transoceanic cables.

Penzias and Wilson’s original plan was to use the horn antenna to amplify radio signals from the Milky Way, as well as from the space between galaxies. They were attempting to create some of the first radio maps of deep space, and they got their chance after the Telstar satellite launch made Echo obsolete. They soon discovered that the antenna was picking up a lot of noise, so much so that it was making it difficult for them to carry on with their projects.

The story is probably familiar to most by now: they checked the antenna by pointing it at New York city to see if that was the source of the interference. They then looked to see if it was some kind of radiation from the galaxy, or perhaps from an above ground nuclear test, or distortion from a nest of pigeons living in the horn. After a full year of trying to locate the source of the signal, and finding that it was uniform across the sky, they concluded that it had to be coming from somewhere so distant that it was fundamental to the overall structure of the Universe, itself.

In 1964, Dr. Robert Dicke of Princeton University, building on George Gamow’s 1948 theory about the creation of heavy elements in what is now known as the Big Bang, proposed that there ought to be a three Kelvin “glow” left behind by the original creatio ex nihilo event. However, before they could complete their own radio antenna, Penzias and Wilson announced their findings, earning them the Nobel Prize.

Robert Dicke remained heavily involved with the Big Bang theory until his death in 1997. In 1978, Dr. Alan Guth attended a lecture by Dicke, in which he (Dicke) explained the problems with the Big Bang theory at that time. One of those problems involved the question of density in the Universe. If the Universe contains insufficient mass, it will continue to expand (expansion having already gained prominence thanks to redshift measurements by Edwin Hubble and others) until all the stars go out, and all the matter loses its motion. This idea was called “heat death”. If there is greater density, then the Universe will be drawn back on itself, due to the force of gravity, into what is called “the Big Crunch”.

Guth decided to tackle the problem, since many other considerations, too numerous for a detailed explanation here, began to emerge. One important discussion centered on why the Universe appears so uniform: it looks pretty much the same no matter where instruments are pointed. His solution for the observed homogeneity of the Universe, in general, and of the CMB, in particular, was a period of inflation. In August of 1980 he published, The Inflationary Universe: A Possible Solution to the Horizon and Flatness Problems. Today, inflation is one of the foundational principles in Big Bang theory because it “solves” the homogeneity question.

Since Guth’s paper was released, astrophysicists have been looking for the “ripples” in space/time that must have been generated by the inflationary impulse. Such an occurrence is thought to have initiated gravitational waves that spread throughout the Universe. As the latest bulletin in the science journal Nature reports, radio astronomer John Kovac, using the Background Imaging of Cosmic Extragalactic Polarization 2 telescope (BICEP2) located in Antarctica, has found faint signals that appear to be the long sought for gravity waves.

Known as “B mode polarization” in the CMB, the signal supposedly represents about 10^-37 seconds into the Big Bang, and energy equivalent to 10^16 gigaelectronvolts: enough to cause the weak force, the strong force, and electromagnetism to be indistinguishable from one another. In other words, it appears to confirm another theory associated with the Big Bang, the Grand Unified Theory (GUT).

Gravity wave detection is yet another step farther down the rabbit hole of modern science. Starting with the Big Bang, redshift, the “fabric” of space/time, inflation, the CMB, and now gravity waves, science has resorted to ever more arcane postulates that conflate fantastical ideas into a hopelessly confusing morass of mathematical legerdemain. Time and again, respected scientists and mathematicians like the late Halton Arp, Stephen Crothers, Eric Lerner, Pierre-Marie Robetaille, Wal Thornhill, and others too numerous to mention have presented analyses that reveal the confusion running rampant through the halls of academia. The links above will provide a wealth of information dealing with each of the issues highlighted herein.

Suffice to say, space is not a substance anymore than time is. Space cannot warp or bend or ripple. “Space” is defined as “the unlimited or incalculably great three-dimensional realm or expanse in which all material objects are located and all events occur”. It is a domain without substance, since it is where substance exists. It is not that substance, therefore it has no existence except as a method for defining the existence and position of things. To infer that space and time are a “fabric” in which gravity can “wave” is ludicrous. It is tantamount to saying that space exists in and of itself and is capable of alteration.

In conclusion, it appears that science is building castles in the air. Eventually, they are all doomed to fall. In the Electric Universe, conclusions are never based on the reification of abstractions. Instead, observations point to the electrical nature of the cosmos without the need for an endless series of ad hoc concepts designed to prop up sagging theories.