Home Picture of the Day Over a Cloud Bridge

Over a Cloud Bridge 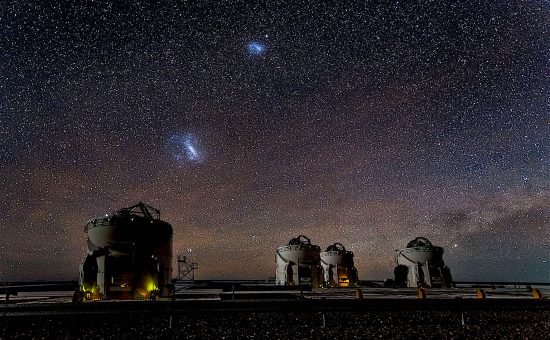 The Small and Large Magellanic Clouds over the Paranal Observatory in Chile. Credit: ESO/J. Colosimo

Ionized hydrogen is a primordial source for many structures in the Universe.

The Small Magellanic Cloud (SMC) is around 200,000 light-years from Earth, as astronomers gauge distance. Its diffuse nature means that it is no more than a smudge of light in the southern sky. Its companion, the Large Magellanic Cloud (LMC), is an irregular galaxy. However, it possesses features similar to more familiar spiral galaxies, such as a “bar” and a single spiral arm. Both galaxies were first seen by the European explorer Ferdinand Magellan during his global circumnavigation in 1519, although the Australian people knew about their existence for thousands of years. The Magellanic Clouds are known as “dwarf galaxies”, orbiting the Milky Way in company with many others. They reside at the beginning of a filamentary structure known as the Magellanic Stream.

Recently, astronomers from the University of Cambridge announced that the two galaxies “…appear to be connected by a bridge stretching across 43,000 light years”. The discovery is one result from the “galactic stellar census” by the European Space Observatory, Gaia. During a “previous encounter”, researchers believe that stars and gas were “ripped out of the Small Cloud”. As they moved closer to the Milky Way’s corona billions of years ago, a “drag force” slowed down the hydrogen gas, allowing it to remain somewhat coherent.

Gaia was launched on December 19, 2013 from the European Spaceport in French Guiana. The 1.45 meter telescope is mapping the stars from orbit around LaGrange point L2, 1.5 million kilometers beyond Earth’s orbit. That location keeps the spacecraft from moving in and out Earth’s shadow and provides a stable, cold platform.

Based on observations by Gaia, and data from the European Southern Observatory, astronomers think that they found a source for the Magellanic Stream, as well as a method by which the bridge occurred: matter was “… stripped from the Small Magellanic Cloud some two billion years ago” due to gravitational interactions, as well as “ram-pressure”. However, the filamentary structure of the Magellanic Stream leaves room for an Electric Universe interpretation.

The Magellanic Stream is composed mainly of hydrogen gas, with low metallic ions. As discussed in previous Pictures of the Day, gaseous filaments are a sign of electric charge flowing through dusty plasma. The charge flow creates vortex structures that evolve into distorted wisps and curlicues of glowing matter. Such distorted filaments are observed in laboratory experiments, as well as in Earth’s aurorae.

Galaxies are moving through plasma in space and are affected by the movement of electric charge. Streams of intergalactic plasma point to electricity as the active agent.