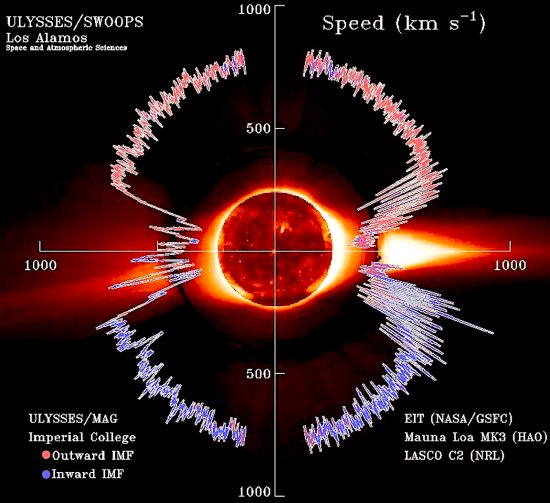 Picture of the Day articles point out that there are linkages between galactic electric currents, solar electric currents, and terrestrial electric currents. Earth is connected to a circuit that flows through the cosmos, but that circuit is difficult to perceive. Charged particles called the solar wind erupt from the Sun in all directions, but how the electric charge is transferred to Earth’s magnetosphere is a mystery.

It is a common idea that energy changes from one form to another: chemical energy is released by fire, which changes to thermal energy that boils water to drive pistons with kinetic energy. Contemporary views suggest that the same principle holds true for the geomagnetic relationship between the Sun and Earth. This process is known as “magnetic reconnection”.

According to consensus scientists, when the interplanetary magnetic field (IMF) slants to the South there is faster “reconnection” between interplanetary and terrestrial field lines, initiating a rapid release of magnetic fields and plasma from Earth’s sunlit side. How this happens, as well as how it begins, are still controversial subjects. In nature energy cannot be destroyed, as the conservation of energy law states, instead it changes state.

As noted, for instance, when electricity powers a motor and spins a shaft, the electromagnetic force is converted to kinetic energy through angular momentum. It is thought that so-called “magnetic energy” can also reappear in different forms. During “reconnection” events, conventional viewpoints say that some of the magnetic energy becomes heat, increasing the velocity of positive ions and electrons that drive electric currents in a circuit linking the plasma sheet with Earth. Modern theories say that the energy transfer rate is primarily controlled by the direction of the interplanetary magnetic field.

Astrophysicists found that the IMF fluctuates in orientation and intensity. Radar measurements of the ionosphere found auroral substorms in that part of Earth’s upper atmosphere ionized by solar radiation. It was discovered that they were wrong about substorms when the interplanetary magnetic field is northward. When there is a fluctuating field, substorms go off once per hour, regardless of orientation.

In the electric Sun hypothesis there is no magnetic reconnection, so there is no mystery. The Sun is an anode, or positively charged electrode in the vast electric motor of the galaxy. The cathode is an invisible “virtual cathode,” called the heliosphere, at the farthest limit of the Sun’s coronal discharge, billions of kilometers from its surface. This is the double layer that isolates the Sun’s plasma cell from the galactic plasma that surrounds it.

In the Electric Universe model, most of the voltage difference between the Sun and the galaxy occurs across the heliospheric boundary sheath. Inside the heliopause the weak electric field centered on the Sun is enough to power the solar discharge. As the theory states, an electric field focused on the Sun accelerates charged particles: the faster they accelerate, the stronger the field. It is that change in particle acceleration that causes the IMF variability and the changes to Earth’s magnetosphere.