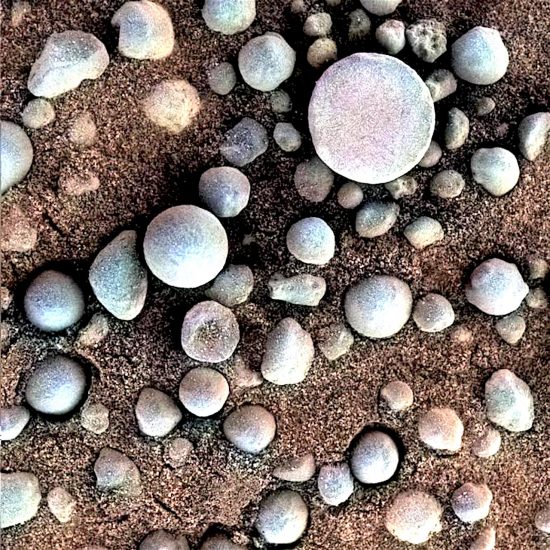 Spherules on the Martian surface near Fram Crater, April 2004. The area shown is 3 centimeters across. Credit: NASA/JPL-Caltech/Cornell/USGS.

How did the uncountable numbers of iron oxide spherules form on Mars?

The Mars Exploration Rovers, Spirit and Opportunity rolled across the face of Mars for many years. Opportunity was launched on July 7, 2003. After a six month journey, it bounced to a landing inside a newly developed airbag system that cushioned its impact with the surface of Meridiani Planum. Opportunity was meant for no more than a six month sojourn, but the data it gathered compelled NASA managers to continue its mission indefinitely.

During its many years of travel, Opportunity provided a wealth of information about the topography of Mars, as well as an analysis of its chemical composition. The surface of Mars appears to be rich in silicon dioxide, otherwise known as quartz, and in various iron oxides, especially hematite.

However, the trillions of tiny hematite spherules covering the landing site, labeled “blueberries” by mission team members, became one of the first mysteries uncovered by Opportunity. How they were formed continues to elude planetary scientists. They were not called blueberries because of their color, since hematite is a dull gray, but because they resembled blueberries in a muffin. Most of the sandstone rocks observed by the rover are filled with them.

Opportunity studied a 10-meter crater known as Concepción. An unknown dark gray material covers some of the rocks near the crater’s rim. The rocks also reveal compressed layers of blueberries in between thin layers of a different mineral.

Mars is composed of iron and silicon, with massive quantities of oxygen bound into the soils and bedrock. The atmosphere on Mars is low density: it is sometimes described as standing on top of a mountain six-times higher than Everest, so it lacks the ability to aggressively attack the Martian lithosphere. On Earth, water vapor in the atmosphere forms a weak carbonic acid solution when it mixes with CO2, so that helps to wear away the rocks. On Mars, such erosion is impossible for several obvious reasons, not the least of which is that there is no open water on Mars or in its atmosphere.

Iron oxide in several forms indicates that something not taking place on Mars today did take place at some time in the past. When that was depends on which of many suppositions are considered. Most Mars research groups speculate that there was once a dense, oxygen-rich atmosphere that allowed for the “rusting” of iron in its crust to take place.

Others have said that there were oceans of open water on the surface that helped to form the hematite nodules covering nearly a whole hemisphere (perhaps more). Whatever the source, Mars has hematite dunes a kilometer high, giant cracks that go on for hundreds of kilometers with their bottoms covered in hematite ripples, and seas of hematite dust tens of meters deep swallowing craters a hundred kilometers in diameter

Previous Pictures of the Day suggest that there was some kind of elemental transmutation on the Martian surface. Electrical energy, flowing underground through selectively conductive materials, can produce many effects, among them the change of one element into another.