Home Picture of the Day Love the Light 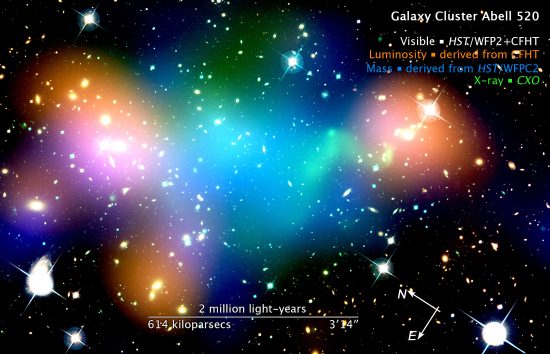 “It cannot be seen, cannot be felt,
Cannot be heard, cannot be smelt,
It lies behind stars and under hills,
And empty holes it fills,
It comes first and follows after,
Ends life, kills laughter.”
― J.R.R. Tolkien

Previous Picture of the day articles contradict the theory of dark matter, in general, along with the idea that it can release vast amounts of radiation. Mainstream astrophysicists believe that dark matter is a necessary component in their cosmological theories, since they think that there is not enough gravity in the Universe for galaxy formation, or for those galaxies to assemble into clusters. Also, galaxy clusters should not maintain such rapid theoretical recessional velocities (95% of light speed). To account for the mass problem, dark matter was invented. To account for the speed of recession, dark energy was invented.

Astronomers think that an undetectable kind of matter must exist because stars on the edges of spiral galaxies revolve with the same angular velocity as stars close to their centers. Newtonian theory insists that stars farther away ought to move more slowly, so dark matter was assumed to impart extra velocity to them, although serious doubt about dark matter was already being published when those ideas were made public.

According to a recent press release, more doubts about dark forces are coming to the fore. Consensus models propose a Big Bang followed by expansion. However, the authors believe that “empty space” is not subject to expansion; preferring to fall-back on ideas that see space as an invariant factor. That invariance is known as, “the cosmological constant” in some equations, and indicates that space should not be seen as a quantity that can change.

As previously written, Fritz Zwicky’s observation in 1933, as erroneous as it was, started the investigations into dark matter, leading the famous astronomer, Vera Rubin, to climb on the band wagon. About forty years after Zwicky, she used his ideas to plot stellar speeds and movement.

In 2011, the Nobel Prize for physics was awarded to Saul Perlmutter, with the other half jointly to Brian P. Schmidt and Adam G. Riess, “…for the discovery of the accelerating expansion of the Universe through observations of distant supernovae”. This was later to be called, “dark energy”.

However, no theory can define dark energy, a force more powerful than gravity; leaving astrophysicists, themselves, in the dark, and a generation of scientists hamstrung by their own theories.

Since dark matter and dark energy cannot be seen by optical telescopes and can be analyzed through inference alone, could it be that something else is taking place? Something that conventional observers fail to consider as an active force? That “something” is electricity.

Electric Universe proponents share a different view regarding the nature of the cosmos. Astrophysicist Hannes Alfvén came up with an “electric galaxy” theory as early as 1981. Alfvén observed that galaxies resemble homopolar motor/generators. A homopolar motor is driven by magnetic fields induced in a circular aluminum plate or some other conductive metal. The metal plate is placed between the poles of an electromagnet, causing it to spin at a rate proportional to the input current.

Galactic discs behave like the conductive plates in that configuration. Birkeland currents flow within galactic disks, powering their stars. Galaxies are, in turn, powered by intergalactic Birkeland currents that are detectable by the radio signals they induce. Since Birkeland currents are attracted to each other in a 1/√r relationship, dark matter can be dismissed when electric charge flowing through dusty plasma is recognized as an attractive force.

In an Electric Universe, electricity drives galaxy clusters, galaxies themselves and their associated stars. Birkeland currents create z-pinches between electromagnetic fields in electrical vortices. The compressed ions form spheres of glowing plasma, some in arc mode, some in glow mode, and some that vary between the two states. Since the flow of electric charge powers stars and galactic wheels, what about their shapes and behavior should be expected?

As time goes on, Electric Universe advocates predict that all “dark” theories will eventually be illuminated by electric lights.