Home Picture of the Day Not a Crater? 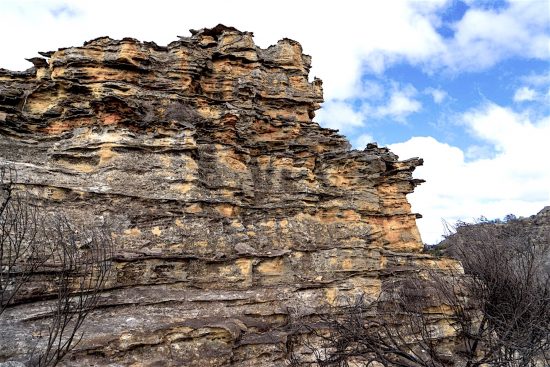 The walls of Wollangambie crater.

The terrain found in Australia is not easy to explain using conventional theories.

Many previous Picture of the Day articles discuss the continent of Australia. Wilpena Pound, Uluru, the Olgas, and the coastal topography seem to disprove gradual processes of sedimentation and erosion over millions of years. Instead of “slow and steady”, some of Australia’s landmarks seem to have rapidly evolved at some point in the recent past.

Among those anomalies are several large craters scattered through the landscape. Gosses Bluff crater and Wolfe Creek crater are probably two of the most well-known. However, as noted in another article about Gooches crater just west of Sydney, many formations are not listed in impact site databases. Information found in local maps or among the people living in the area will occasionally suggest that something other than vulcanism or water flow created them.

A case in point is Wollangambie crater. Although some published articles refer to it as an “ancient asteroid impact,” it is not shown in any major list of Earth impact sites. The Planetary and Space Science Centre (PASSC) database does not show it, nor does it appear in The Astronauts Guide to Terrestrial Impact Craters, or the listing found at the Lunar and Planetary Institute.

The area surrounding Wollangambie is unusual. The crater is about two kilometers in diameter, with an uplifted central mound dominated by a shallow depression. Nearby is a similar structure known as Mountain Lagoon—again a hummocky uplift with a central depression in its peak. In the case of Mountain Lagoon, there is a lake within the depression, whereas Wollangambie’s central lowland is marshy. What causes a crater in sandstone that does not damage the surrounding landscape? What can form a cone in sandstone and not collapse or excavate the centre?

Straight valleys extend outward in all directions throughout the surrounding area. Most are bone dry with no sign that they were ever carved by water erosion. The linearity of the valleys is in itself not unusual. What is unusual is that there are places where steep valleys meet at definite angles: primarily three of the valleys will intersect at 120°. In one location, five straight valleys radiate from a central confluence. What can cut valleys 900 meters deep through the hardest sandstone in this fashion? Certainly water cannot be the active agent since there is no way that it can move straight through the stone outward from a common center.

A new way of seeing Australia should be considered. The gradualism that dominates geological theories today can only account for these observations by ignoring key points. As pointed out many times, where is the material that was “eroded” from Australia’s landscape? In some locations there are flat plains extending for thousands of square kilometers completely stripped of all overburden, exposing nothing but barren bedrock. Here and there in those flat wastelands are sandstone monoliths standing in torrid isolation.

Vertical cliffs running for hundreds of kilometers look as if they were formed yesterday, in some cases. They are composed of layers that include sandstone and ironstone built up into mountains that have been cut in half. Regardless of where one looks in Australia, there are ever greater puzzles to unlock.

Written by Stephen Smith from information provided by Garry Maxfield.