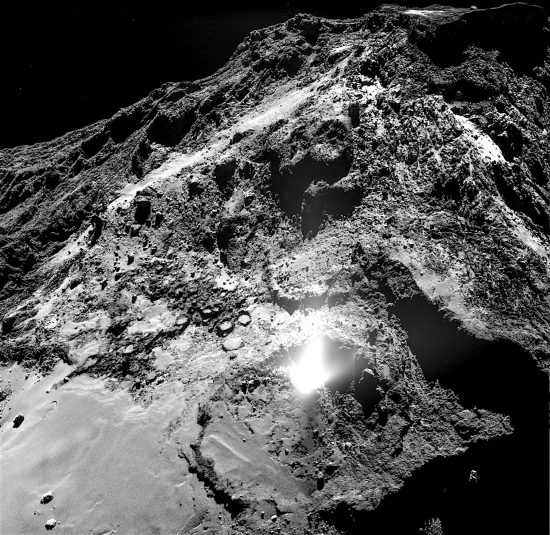 How can water vapor explode from a comet far from the Sun?

The Rosetta Cometary Probe was launched March 2, 2004 on a rendezvous mission with comet 67P/Churyumov-Gerasimenko. It was in hibernation for most of the trip, only powering up its instruments in January of 2014.

One of the comet’s most striking aspects is that it does not look like a ball of ice and dust. Rather, it looks like a piece of slag from a blast furnace. That idea does not conform to the prevailing opinions about comets. Astronomers think that comets formed around the same time as the gas giant planets, about 4.6 billion years ago. They are supposed to be made from the same clumps of dust and ice that created the Sun.

However, in an Electric Universe, comets are probably the result of electric discharges that devastated the Solar System a few thousand years ago. Natural philosopher Wal Thornhill wrote:

“In the Electric Universe model it is futile to look for remnants of the primordial gas and dust from which the solar system is supposed to have collapsed. Comets are not primordial composites. The matter in comets (and asteroids and meteoroids) has been through several processes, first in a star, then within a gas giant and possibly a rocky planet before being discharged into space.”

According to a recent press release, although 67P was almost 700,000,000 kilometers from the Sun in July 2016, a plume of dust erupted from the comet’s surface near the rim of a large crater. Since scientists assume that frozen gases, including water vapor, are responsible for cometary activity when they are warmed by the Sun, sublimation of gases at that distance is not expected.

Planetary scientists assume that frozen gases on a comet’s surface produce dust. When those substances sublime, they believe that gas streaming into space sweeps dust particles along with it, forming the visible jets. However, that process cannot explain the July 3, 2016 eruption that produced nearly 18 kilograms of dust per second, making the jet “…a lot ‘dustier’ than conventional models predict.”

It is possible that under the comet’s surface there are cavities filled with compressed gas. Warming the overlying regolith caused cracks to develop and gas to escape. However, an electrical theory of comets suggests another way for them to become active when they are far from the Sun: electricity.

Various missions, such as Giotto and Deep Impact, revealed comets to be blackened, cratered, and fractured. No ice fields, reflective crust, or watery clouds were observed. The Giotto spacecraft’s close approach to Halley’s comet discovered the blackest object ever seen. The comet’s energetic plumes blasted out from a dark, dense nucleus. Comet Tempel 1 resembled an asteroid more than a chunk of muddy slush. Craters, boulders, and cliffs were observed—nothing like a snowball venting. Water vapor was discovered near the comet, but there was too little ice on the surface to account for it.

Other comets defy convention: Shoemaker-Levy 9 exploded when it encountered Jupiter’s magnetosphere, and the pieces did not expel the volatile compounds astronomers expected to see. Deep Space 1 flew by comet Borrelly in 2001, finding it hot and dry instead of cold and wet. The Stardust mission to comet Wild 2 found a great deal of dust, but no trace of water could be found on its surface.

Comets form plasma sheaths that can become comas, often more than a million kilometers in diameter. Plasma filaments connect comets with the Sun’s electric field, generating “hot spots”; so hot that extreme ultraviolet light and X-rays were detected radiating from comet Hyakutake. In 1976, astronomer Robert Roosen photographed what he thought were plasmoids colliding in the tail of comet Kohoutek. A paper authored by J. C. Brandt and himself (Possible Detection of Colliding Plasmoids in the Tail of Comet Kohoutek (1973f)), took issue with Fred Whipple’s dirty snowball theory based on observational evidence.

Indeed, since comets travel through variable electric potentials as they move toward and way from the Sun, those electric fields cause visible glow discharges. Rather than dirty snowballs, comets are electrically active, solid bodies.