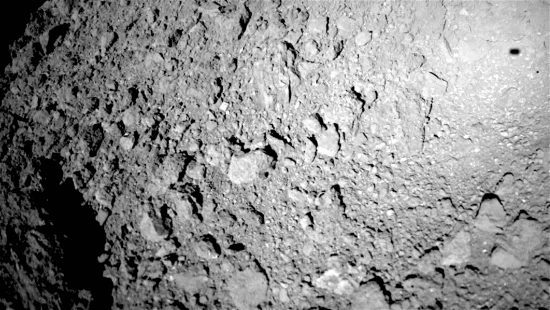 MASCOT’s shadow (upper right) during its descent to the asteroid Ryugu. Credit: JAXA. Click to enlarge.

MASCOT is on the surface of Ryugu.

The Japan Aerospace mission, Hyabusa 2, recently deployed its third lander to the surface of asteroid 162173 Ryugu. After its December 3, 2014 launch date, and a velocity nudge from Earth’s gravity on December 5, 2014 Hyabusa 2 entered orbit on June 27, 2018.

MASCOT joins the two Minerva landers that are already on the surface. The Minerva landers’ namesake became a satellite of the Sun during the Hyabusa mission to asteroid Itokawa in 2005, when its separation from the spacecraft was delayed. It never reached the asteroid, so continues in solar orbit, a silent witness to the constant problems experienced by that mission.

The Minerva II 1a and 1b solar-powered landers continue to operate, while MASCOT’s 18-hour battery life has now expired. MASCOT provided details about the surface of Ryugu; finding it rocky and pitted. That information delayed the touchdown of the Hyabusa 2 mothership for several weeks, until a suitable landing zone can be calculated.

MASCOT, or Mobile Asteroid Surface Scout, is a box-shaped package that weighs about 10 kilograms. Its battery life was around 200 Watt-hours, or 16 hours. However, it lasted closer to 18 hours during its data collection. MASCOT’s scientific instruments include a high-resolution camera; the MARA radiometer that measured surface temperature, as well as the regolith’s thermal properties; an infrared spectrometer called MicrOmega; and the MAG magnetometer, which determined the asteroid’s magnetic field. Data from those instruments is still being collated by the research team, so it will be a few weeks before the analyses are released.

Electric Universe proponents predict that Ryugu will be similar to the other asteroids and comets explored by various spacecraft: rocky, low density, barren, dry and relatively inert. Why? Why are the small bodies—comets, asteroids, moons—so alike?

It is possible that the Solar System was once more electrically charged than it is today. When electric arcs  flow over a solid surface, they produce craters, but also many other common structures. Research on the electrical etching of rocky surfaces must, therefore, take center stage. Most of the geological features in the Solar System can only be generated by electric arcs. If that is true, its actual history bears little resemblance to textbook descriptions.