Home Picture of the Day The Balochistan Temple Complex Part One

The Balochistan Temple Complex Part One 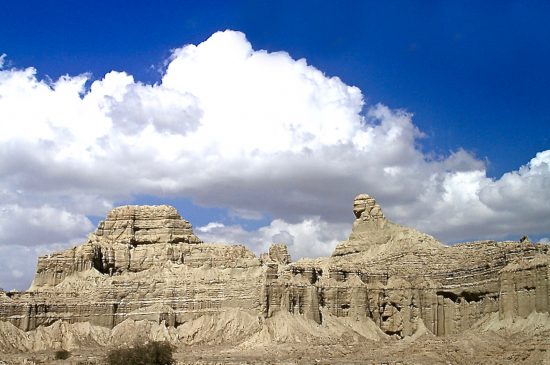 Ruins of what could be a sphinx and temple structures in southern Pakistan. Click to enlarge.

Pareidolia: the tendency to perceive a specific, often meaningful image in a random or ambiguous visual pattern.

Everyone is familiar with seeing “horsies and duckies” in cloud patterns. Lying back in a field of grass and watching the random interplay of dust and water vapor in the sky is an experience, perhaps, shared by all. The so-called “old man of the mountain”, or other formations etched in stone, can often be interpreted by human pattern recognition as something that they are not.

One of the most intriguing examples of that propensity might be found in Hingol National Park, Pakistan. As the image at the top of the page illustrates, the structures there are reminiscent of highly eroded temples and statues, particularly a sphinx-shape that crowns the ruins.

One of the major tenets of Electric Universe theory is that some time in the recent past, Earth was torn by horrific destruction. Storms of lighting bolts, thousands of times more powerful than anything seen today, writhed across the planet from North to South. Many archeologists exploring the ruins of Egypt or Tiwanaku are struck by their anomalous remains.

Tanis, for example, is an ancient city in Egypt that reveals heat damage and massive erosion. Some of the buildings appear to have been blown apart. Tiwanaku, as a previous Picture of the Day discussed, is wrecked. Its ship dock is now tens of kilometers from Lake Titicaca, the only water source. The altiplano where the city is located is too high to grow food and too arid to provide water for a city of its size.

Returning to Balochistan, the temple environs there (if it is a temple: readers must make their own judgments) also seem to be heat-blasted to such an extent that the interiors of the buildings are fused into  solid masses of stone. The sphinx-shape retains a semblance of its former state—squinting the eyes helps to see the blurred remains. Some analyses of the area are also highly suggestive of a temple dedicated to the Hindu god, Ganesh. Statue-like hulks are like melted shapes merged into the half-disintegrated walls and pillars of a massive edifice.

What force can do this to stone walls and statuary? If the conventional view is proposed, then the civilizations of India and Pakistan that left the ruins existed tens of thousands of years ago. Such extensive erosion can only be considered over immense time scales, unless a force that can act quickly, with incredible destructive power, is considered. That force is electricity.